“The unprovoked and dastardly attack” 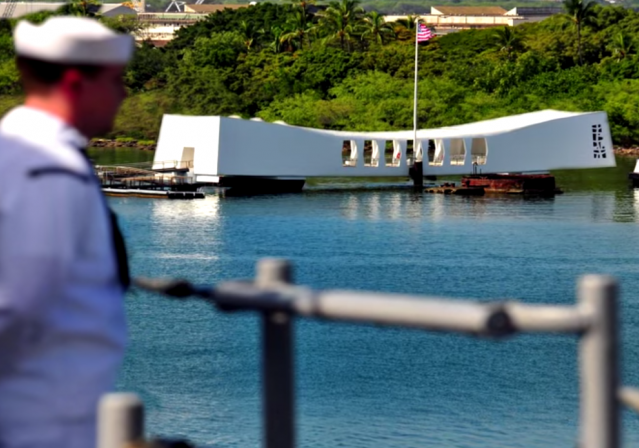 “To the Memory of the Gallant Men Here Entombed and their shipmates who gave their lives in action on 7 December 1941, on the U.S.S. Arizona.”

Those are the words etched in marble at the U.S.S. Arizona memorial.

The next day, America declared war on Japan.

Fast forward to 1945 and the Japanese surrender. A Legal Insurrection reader sent a link to this video a few years ago:

67 Years Ago my Dad shot this film along Kalakaua Ave. in Waikiki capturing spontaneous celebrations that broke out upon first hearing news of the Japanese surrender. Kodachrome 16mm film: God Bless Kodachrome, right? I was able to find an outfit (mymovietransfer.com) to do a much superior scan of this footage to what I had previously posted, so I re-did this film and replaced the older version There are more still images from this amazing day, in color, at discoveringhawaii.com.

Incredible photos of Oahu and the attack on Pearl Harbor here. Did you know the U.S.S. Arizona memorial was built in part because of Elvis Presley? There are some pretty neat factoids here.

While it was many years ago that I visited the Arizona Memorial with my family, I don’t recall any part of the exhibit laying out excuses for the Japanese attack. But our country has “progressed,” so our 9/11 memorial, as I understand it, does offer up supposed bases for understanding, perhaps “empathising”, with our enemy. Many of us are outraged by Hillary’s recent comments in that regard, but she may be more tuned in to the left’s successful inculcating of mush into American’s thinking.

Here’s how the Jarrett administration is honoring the USS Arizona and our vets.

This article is interesting for a Gruber moment. The park superintendent stated, “We tried to work that system the best we could.”

It gets even better. His last name is DePrey.

Thank God for the Atom Bombs!!

My Dad’s B-29 Bomb Group, the 462nd Hellbirds, had a motto painted on the nose of each Super Fortress and sewn into their patches and other Hellbird insignias: WITH MALICE TOWARD SOME.

Ask a millennial what ‘Pearl Harbor’ is and they’ll tell you it’s a place where the Pearls dock their ships.

Heck, ask them about Vietnam! Their answers will make your hair curl.