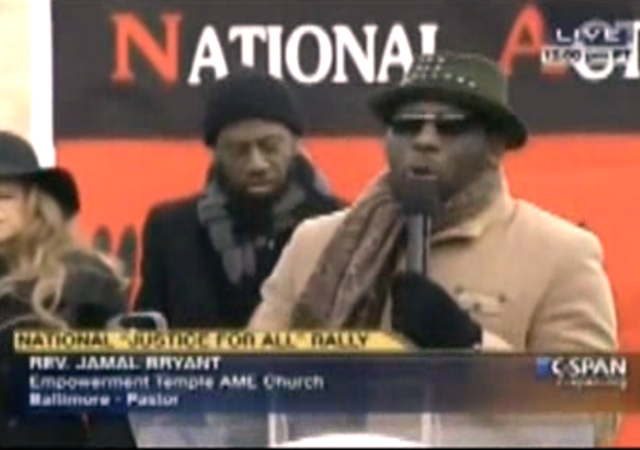 Yesterday, as they often do, thousands of protesters descended on Washington, DC to protest police brutality against black men. The rally, led by Al Sharpton and attended by high-profile activists in the black community, focused on promoting a “black agenda,” and railed against the typical enemies of the progressive community: the Koch brothers, establishment politicians, and the Republican party.

To close the rally, Reverend Jamal Bryant of Empowerment Temple in Maryland offered one of the angriest, most divisive prayers ever uttered in public. Via the Daily Caller:

Dispatch angels right now of protection around our sons from psychopathic, sociopathic police officers. I pray right now that you will convince prosecutors who have, in fact, given up the law for popularity. We pray that you will disrobe judges who are elected, but have not been appointed by your glory. We’re going to march in 2016 until we have righteous Congress people, righteous Senators, and a righteous President. God, we don’t want just black elected officials, we want a black agenda. We want to make sure that ‘our lives matter’ is not a slogan, but it is a lifestyle. Let us march on. And God, for every person who opposes justice, every person who opposes righteousness, we came to remind them – we know when they are sleep, we know when they’re awake, we know when they been good or bad, and because they been bad please send Black Jesus for goodness sake. Amen and God bless you.

God save us all from a world where “righteousness” is equated with the sort of racism that Reverend Bryant subscribes to. He calls for “Black Solidarity Sunday,” when what we really need is Human Solidarity Sunday.

The radical activist classes in America became parodies of themselves a long time ago, but 90% of the time it doesn’t matter because they represent a fringe that not even mainstream involveds recognize as part of the family; but this sort of philosophy is dangerous not because it invokes race above all else, but because its ultimate goal is to divide Americans based on an arbitrary scale of lightness to darkness.

That sociopath being quoted is but one of our president’s many malignant proxies.

Obama’s term in office ends in 2 years. Will we still have a nation left?

Race baiters all. Pay me.

“‘our lives matter’ is not a slogan, but it is a lifestyle”

If this were true blacks would not be raising psycho children which steal, assault riot and murder at rates far about other races.

Ummm….didn’t he arrive six years ago?

Heh. A lot of people hoped so, but it turns out it was just a Muslim.

Got some advice on my road to maturity which I in turn passed on to the son. It’s served us both well.

That wisdom: If you wanna stay out of barroom fights, then stay outta barrooms.

Give it a slight edit: If you don’t wanna be treated as a criminal, then don’t do criminal things.

This divisive and markedly racist fringe element will die off soon and then a new generation, a new solidarity of black leaders will hopefully stand together for the good. I’ve seen and heard these good people: Dr. Ben Carson, Dr. Alveda King and so many more. Maybe a NYT whole page letter denouncing this protest and calling for peace, lawfulness should happen, signed by the all of the above.

Shaprton, Jackson, et al will reap what they sow. Count on it. God will not be mocked.

While back in my hometown of Chicago, far from the perverse black outrage at “whitey”… do #BlackLivesMatter?

You left out Ben Carson and Thomas Sowell. Why?

“Dr. Ben Carson, Dr. Alveda King and so many more.”

You’re challenging without reading. Why?

On its face, these are the acts of a “divisive and markedly racist fringe.”

But in actuality, these are are acts endorsed by – if not organized – by our lunatic president. In other words: the fascist players running rampant in our streets are agents of our government.

Given the retirement of the GOP as an opposition party, this is going get a lot worse before — or if — it gets better.

We can only hope Boehner gets the same treatment Hitler gave Ernst Rohm when Hitler was done using him.

Yes. Wright teaches this and worse. Obama sat under this teaching for twenty years or more. It is sick, and sicker yet that Obama exposed his daughters to this. Hatred dressed up as righteousness.

The notion of a black baby Jesus was all over the airwaves in the ’50s and ’60s.

This song is taken from a best-selling Christmas album, The Star Carol, first published in about 1958 by Capitol Records. Tennessee Ernie Ford. Country music fans made this an enormous seasonal hit for several years running.

Sharpton must have missed it.

Up until about 20 years ago, the riots ended when the thermometer dropped below 60F.

They know that the White House is behind them.

Sharpton, et al, have taken the baby Jesus, the center of Christian religion, and turned everything into a race issue.

Does it get any lower than that? Especially for an ordained Baptist minister.

I’d like to be there to see this, when/if it ever happens. I’d like to see this “Black Jesus” appear and slap the “Reverend” Sharpton upside the head, for calling for justice and righteousness while representing neither, and for taking the Lord’s name in vain.

In the Gospel, Jesus, a Jew, entered the Temple of Herod and – seeing that the priests were allowing trade and commerce (and crooked money changing) to occur within its walls – overturned the tables, poured out the coins, and rebuked the priests for not following the Word of God, and turning the Temple from a place of prayer into a “den of thieves”.

The “Reverend” Sharpton should know this. Why does he expect that his hypocrisy will go unnoticed?

Don’t be stupid. Jesus wasn’t black. It’s not even disputable. It’s hard to take someone seriously when they claim to be a religious leader, but get such fundamental elements of the bible wrong. Intentionally misrepresenting the bible will result in the plagues of the tribulation being inflicted upon you according to the last chapter of Revelation. Of course, if you don’t really believe in God or Jesus, then why should you be afraid of defying them?

The only possible conclusion that I can come to is that Jamal Bryant is an atheist pretending to be a Christian leader. Logically, nothing else makes sense.