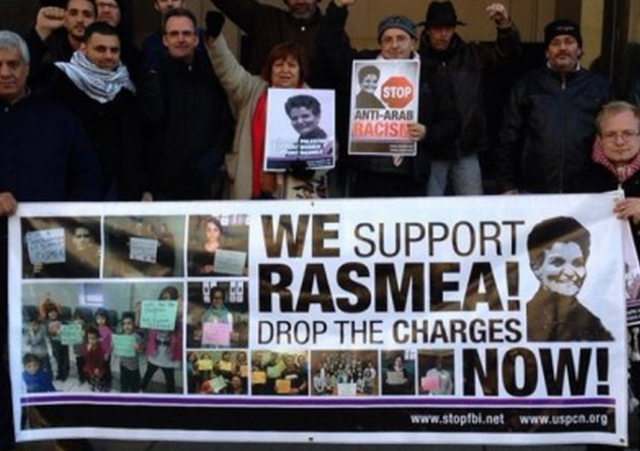 Rasmieh (Rasmea) Odeh, the terrorist convicted in Israel of a supermarket bombing that killed two students, was convicted in federal court in Detroit on November 10, 2014, of immigration fraud for lying on her visa and naturalization applications.

For details on why Odeh was guilty as charged in Israel and Detroit, see my post Rasmea Odeh rightly convicted of Israeli supermarket bombing and U.S. immigration fraud.  She faces 10 years in prison, but likely will receive a much lower sentence.

After conviction, the Judge revoked Odeh’s bond since she was a flight risk. After a motion for reconsideration, the Judge this granted her $50,000 cash bond, finding she was not a likely flight risk, but did have problems with honesty.

Now the prosecutors have filed a motion for a mandatory hearing on the source of the funds being raised for the cash bond, contending that the crowdsourcing of the bond money by activist groups negates the purpose of the bond since Odeh will have nothing to lose if the money is forfeited. Aggressive action by activists twice cause the court to issue orders protecting the jury from outside influence.

The Motion reads in part (full embed at bottom of post):

4. In the present case, the government is not concerned about funds being the product of criminal activity. Rather, it believes that the funds which defendant Odeh is seeking to post are not her own or those of her relatives or close friends, and therefore may not create a sufficient incentive, or perhaps any incentive at all, for her to appear as ordered.

5. Defendant is not planning to pledge her own property as collateral, but rather is seeking to raise money from contributors for her release. See http://uspcn.org/2014/12/08/rasmea-is-coming-home-to-be-released-on-50000-cash-bond/ (“The defense committee is working now to secure the money for her release. Please help us raise it by donating HERE now!”); see also http://www.stopfbi.net/2014/12/8/rasmea-coming-home-shes-be-released-50000-cash-bond (same).

6. It is difficult to see why money raised from large numbers of people creates any incentive for Defendant Odeh to appear. It is likely that she would suffer no personal loss by virtue of its forfeiture, and if money is raised from a large enough number of people, none of them would suffer a significant loss either. It is defendant’s burden to establish by clear and convincing evidence that she is not a risk of flight….

The prosecutors want the court to ensure that Odeh is not released from prison before the hearing on the source of funds:

8. Because the Bail Reform makes the requested hearing necessary prior to permitting a release, the filing of the instant motion ought to have the legal effect of mandating a stay of the release order. However, in order to allow the United States Marshal Service and the Clerk’s office to be aware of the terms of the instant motion, and to allow the Court to conveniently schedule a hearing if and when defendant posts $50,000, the government asks that the Court enter a separate order on the docket, staying the pending release in the event defendant posts the money, until the Court can conduct the required hearing.

Update: The Court has scheduled the hearing for December 11 at 11 a.m.

(Note: The title of this post originally used the term “crowdsourcing,” but I think “crowdfunding” is more accurate, so the title was changed.)

Just like the high-profile backers (including a Nobel prize winning scientist and other similarly deluded “intelligent” people) of Julian Assange, who forfeited large sums when he fled the conditions of his bail. Most of these individuals petitioned the court and had the sums owed substantially reduced.

In the case of an individual who is a “celebrity defendant”, and Odeh certainly fits that description, the bail should be set at a much larger sum. Even if this figure just reflects all the extra work that the justice system has had to undertake to prevent jury tampering etc. I was surprised at how relatively paltry the initial bail was set considering all the resources apparently available to the Odeh supporters. All those glossy posters etc. don’t pay for their own production.

“Aggressive action by activists twice cause the court to issue orders protecting the jury ….”

Terrorists stink up the place, wherever they may be found.

My God! Can any judge be this stupid? Not a flight risk! She will be gone in less than 24 hours! She will become a poster woman for the murders of isis. We as a nation are on a suicide watch.

I dunno. They might kill her on sight. Is she the RIGHT kinda Muslim?

She seems more the sort who enjoys freely lecturing in the West with all our amenities over living the way her people do.

Ok, I don’t have as much of a problem with this as some might. You are allowed to borrow the bond money from a friend. If people are stupid enough to trust her, well then if she runs they pay for being stupid.

The question isn’t their stupidity, not our business, but does she have any incentive not to run when the only losers will be donors she doesn’t even know?