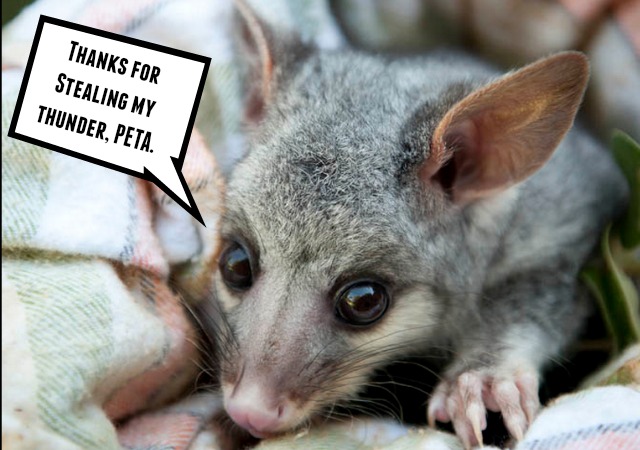 Forget the New Year’s ball drop in Times Square. Brasstown, North Carolina celebrates with their annual Possum Drop. A plexiglass box containing a live possum is lowered when the clock strikes twelve and then there is much rejoicing. Or at least there was before PETA came to town.

Participating possums were released back to the wild after their fifteen minutes of fame. Yet PETA claimed the annual Possum Drop would create a “zone of lawlessness” wherein anything could happen to the possum of the hour.

According to the Wall Street Journal:

The community of Brasstown, population 240, has been lowering a plexiglass box containing a live opossum from a pole at Clay’s Corner Convenience Store at midnight on Dec. 31 for the better part of 20 years. Organizers call the Brasstown Possum Drop a hillbilly homage to the ball drop in Times Square. Animal-rights advocates say it is a cruel act to a shy creature that not only must be left out in the cold mountain air but also can be easily startled by the festival’s fireworks and brass band.

Festival organizer Clay Logan said Monday that the show will go on, even with no live animal at the party in mountainous Clay County, about 100 miles southwest of Asheville. “We’ll probably just lower some other form of possum, a dead possum, road kill maybe, or possum stew,” Mr. Logan said. “It is the Possum Drop after all.”

Nothing says “Happy New Year!” quite like road kill.

The state even passed a few laws in an attempt ensure the longevity of the Possum Drop, 2013’s “Opossum Right to Work Act” and this year’s “Clay County Opossum Exclusion”, the WSJ reported. Yet, that was not enough to trump PETA’s anti-New Years agenda.

According to My Fox 8, “A recent ruling by the Wildlife Resources Commission requires Logan to have a permit to drop a live possum.” Sadly, as Logan explained to a local news outlet, he simply doesn’t have time to request the requisite permit.

PETA is fine with a stuffed possum though, just not the real thing.

Could this be one giant attempt to prevent the Possum Drop from upstaging New York’s festivities? All signs point to “in Obama’s America, anything is possible.” Earlier this year, PETA named groundhog killer New York Mayor Bill de Blasio their “Person of the Year.” Why the sudden fondness for New York? Really makes you wonder.

If only PETA was as concerned about groundhogs as they are possums, Charlotte the groundhog (who was actually a stand-in for Chuck) might still be with us today, running around, doing little groundhoggy things. R.I.P. Charlotte, R.I.P.

In the meantime, happy possumless New Year. If such a thing is even possible.

Please tell me once again why we should pay attention to these PETA fools and those of their ilk.

Because there was a ruling by the Wildlife Resources Commission. The better question is why should we pay attention to those fools?

I suppose the possumbilities are endless…

I don’t know what is more ridiculous: PETA’s objections to the event or the fact that the state wants to force them to pay it a tribute for giving an oversized rodent a brief ride in a cage.

The whole world is going mad.

Bake in oven (300 to 350 degrees) until tender. Baste every 15 minutes. To determine when done, pull leg away from body. When done, throw away the possum and taters and eat the board.

Can’t quite say the same for Peta….and why does Peta rhyme with Eat a……..

I will. At the very first opportunity. It may take years, but I’ll be on a mission…

Plus, you got to have possum fat to deep fry owlburgers, if you follow Granny Clampett’s recipe. Spotted owl preferred.

“PETA is fine with a stuffed possum though, just not the real thing.”

For now. If they win here, I suspect it won’t be long before they object to using a stuffed possum, claiming that it’s “offensive to our marsupial brethren”.

“PETA is fine with a stuffed possum though, just not the real thing.”

Fine. If PETA wasn’t just a group of would-be bullies, spoiling to spoil other people’s harmless fun, they could actually gain some favorable publicity in Brasstown.

Let the President of PETA humbly offer him- or her- or itself, whatever, as a sacrifice to the sinners of Brasstown. To be dressed in a possum costume, and dropped at the stroke of midnight, in order to ‘save the possums’.

Every journalist east of the Mississippi would flock to publicize every second of the event. Among the hordes of politically correct viewers, it could outrank the Crucifixion, as PETA gives up its leader to atone for our sins.

they actually ruined it for red green years ago
https://www.youtube.com/watch?v=xrT-R3NHD7w

http://www.imdb.com/title/tt0829019/
they ended up using harold as the possum

Possum drop on Red Green in the first link comes at 18:42.

Perhaps they can replace the possum with a PETA-authorized human female. PETA loves to parade human females with their various parts identified in public. FEMENists do also, so there will surely be a 97% consensus. After the celebration, they can simulate a Planned Parenthood ritual sacrifice, with an ISIL juxtaposition, or a PETA-authorized euthanasia of unwanted clumps of cells. No, still Planned Parenthood. Actually, both detest a “burden”.

I support ethical treatment of animals. However, PETA’s extremism, and sincerely held bigotry, suggest that they have an ulterior motive. They should probably rein in their activists and reconcile their advocates’ talking points. They may also want to publicly reject the fairytale of spontaneous conception. As well as their alliance with pro-choice political, economic, and social special interests. At best, it makes them appear awkward.

North Carolina needs to remind PETA of when they killed dozens of animals in the back of a van in Ahoskie, NC in 2005. Then dumped the animals in a garbage bin. Many were adoptable puppies and kittens. PETA kills about 88% of the animals it takes in, and most of those are killed very quickly without any attempt to find a home for them. The money is more important.

My brother-in-law prosecuted that case.

PETA euthanizes virtually every animal that comes under their control.

They have zero credibility to be questioning ANYONE on the treatment of animals.

If you ever rescue an animal, and want it to live and find a home, whatever you do, do NOT let PETA get their hands on it.

I have a rather nice T-shirt. On the front:
PETA – People Eating Tasty Animals

On the back:
All God’s creatures look best next to the potatoes and gravy.

While wearing it, the reactions have been well over 90% positive. Methinks PETA has a (well deserved) problem with their public image.