Obama got exactly what he wanted from faux Cuba negotiation

Obama got exactly what he wanted from faux Cuba negotiation

That is, if you consider his goals 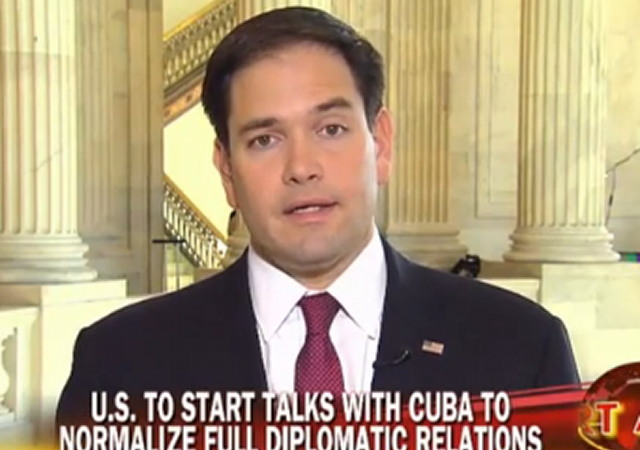 Marco Rubio, among others, believes that Obama is a bad negotiator, the worst since Carter:

I don’t know what [Obama’s] intentions are. His foreign policy is at a minimum naive, and perhaps even truly counterproductive to the future of democracy in the region.

Just last week we imposed sanctions on human rights violators in Venezuela, but the people who are supporting the Venezuelans in conducting those violations — literally the Cubans have taken over the Venezuela government, we’re actually lifting sanctions on them.

How absurd is that? And it’s just par for the course, all of these tyrants around the world know the United States can be had. At a minimum I will say this, the president is the worst negotiator we’ve had as president since at least Jimmy Carter and perhaps in the modern era.

But Rubio is wrong; Obama is not a bad negotiator at all. He is a faux negotiator.

And perhaps Rubio even knows this (the hint being “at a minimum”) but feels he can’t say it or he will be labeled a kook.

But I can say it: Obama’s intentions here were almost certainly to prop up the Castro government and concede to them, and the negotiations were an excuse to do that. There were no reluctant concessions on the part of Obama, there were eager concessions.

As Rich Lowry writes, it’s not so much about whether it was time to loosen economic sanctions or not (reasonable people differ on this), it’s about how it was done:

The rest of Obama’s sweeping revisions — diplomatic relations and the loosening of every economic sanction he can plausibly change on his own — are freely granted, no questions asked. It is quid with no pro quo. Even if you oppose the isolation of Cuba, this is not a good trade.

After waiting out 10 other U.S. presidents, the Castro regime finally hit the jackpot in Obama…

Every dictator around the world must be waiting anxiously for a call or a postcard from Obama. The leader of the free world comes bearing gifts and understanding. He is willing to overlook human-rights abuses. And his idea of burnishing his legacy is to clinch deals with his country’s enemies.

Anyone who has observed Obama over the years ought to know that. Whether it be Iran, the Afghan Taliban (Bergdahl swap), or Cuba, this is his m.o. for “negotiating” (wink, wink) with tyrants.

Comparing Obama to Carter is an insult to Carter, who was a liberal but a patriot with good intentions. Obama does not appear to have good intentions, unless your idea of what’s good for the world is to decrease American power on the international scene, harm its traditional allies, and help its enemies. Unfortunately, there are many people on the left who believe exactly that.

The US has 300 people in the special interests section in Cuba. How many more people do they need for a full embassy?

As the article says “…Obama’s intentions here were almost certainly to prop up the Castro government and concede to them” so by next year end Casto will be buried and so will Cuban Communism….”

Obama has the Reverse Midas Touch – everything he muddles in turns to manure.

It has been suggested that somehow he will close Gitmo by voluntarily voiding the perpetual lease we have. While the Senate must approve a treaty, I would not doubt Obama would claim he could void one as an executive privilege.

What, giving back the entire military base? That would be radical.

Before this little episode has played out, Obama will turn the entire base back over to the Castro government. If it takes him until the last day of his term, and he has to pull it off quietly when no one’s looking, he’s going to do it.

And he’d be right. The president does not need the senate’s advice or consent to abrogate a treaty. Cf Goldwater v Carter.

However, does that authority give him the power to close Gauntanomo? If there is an appropriations law that requires that money be spent to maintain the base and an american presence there, wouldn’t that law force Obama’s hand? At the very least, Congress could refuse to provide the money needed to relocate the military units at the base.

The real problem is not Obama but inept (GOP) or complicit (Dems) representatives in Washington coupled with a compliant state-run media who laud these sinister goals. There is no longer a Democrat Party, and the GOP is impotent with its limp dick leadership.

“There is no longer a Democrat Party, and the GOP is impotent with its limp dick leadership.”

Oh my mean the new Left Wing of the Democrat Party – as opposed to the old Facist Obama Democrat wing……..

he’s going to argue that since cuba has refused the lease payments the lease has been violated.

I’m only half joking when I say that I think that his decision making process boils down to figuring out what a conservative would do. Then he does the exact opposite.

Instead of conservative I would say a reasonable person, but I repeat myself!

It’s not that Obama is a bad negotiator, or that he is actively trying to undermine America.

It’s that he’s an idiot. He does not understand negotiation.

Let’s assume that he wants to undermine America and is also a bad negotiator. What, then might he have requested of Cuba?

Maybe a few released political prisoners. Maybe another piece of Cuban land. Maybe severance of ties with Venezuela. Hell, a box of cigars!

Look at everything Obama does through the lens of Cloward-Piven domestically, and damaging American interests internationally.

It will make complete sense when you do.

An idiot would get some things right, just by the law of averages. This kind of consistency is possible only by design.

“This kind of consistency is possible only by design.”

Correct. I get tired of having to explain to people that Obambi may be stupid, and he maybe a gutless pussy, but the people running things reflect his desire and belief. They are all Marxists.

Every single thing that has been done has harmed the country and made our enemies stronger. Not by accident.

RE: “the people running things ….are all Marxists.”

Obama does not negotiate.

Except with conservatives, or Israel. Then he doesn’t negotiate. He dictates.

Not sure I’d give Carter much of a shout out on this one. Granted he didn’t take as many actions that were so heavily one sided to our adversaries when he was president. But his view has certainly changed since then. Especially with Israel. And now he has publicly said he thinks this was a great move with Cuba. Even Carter is going more left than he was in the 70s.

What is galling and crazy here is that Obama grants major economic and diplomatic concessions to Cuba just when declining oil prices place its major state benefactors in a position of economic weakness. So, while operating from a position of total negotiating strength, he concedes that advantageous position and negotiates from a position of weakness.

The amateurishness of his diplomatic posture, presented instead as the product of savvy and astute statesmanship, is utterly transparent. It’s no surprise to learn that Ben Rhodes, the speechwriter who penned Obama’s intellectually dishonest Islamic historical revisionism in his Cairo speech of 2009, was apparently the lead “negotiator” in this Cuban intrigue.

Obama is one of those people who probably had a portrait of Che on his wall in collage, and I’m sure he admires Castro. However, normalization *might* have the unintended benefit of drawing a wedge between Russia and Cuba.

Please remember folks, everything Obama does is intentional. He wants to bring this country to its knees.

Bad actors clarify for the world the difference between themselves and most everyone else. So one owes some gratitude to President Precious. “Moving on:”

For the Ruling Class, the Government Party (Rs + Ds):

For the Country Class, the Freedom Party (TEA + Libertarians):

President Precious’ support for thugs and dictators — one is certain he is only still winding up the fury of his domestic iterations — has forced human-minded people everywhere to plan for taking care of themselves. Not an undesirable outcome.

An evil one can turn anything to evil, and does try. Yet, hatred hurts itself and evil will itself, as the great Tolkien said, a Roman Catholic who participated in translating The Jerusalem Bible into English.