Supporter claims just more propaganda. Convicted immigration fraudster put in jail lockdown after she caused disruption and to protect her.

On December 11, 2014, federal court in Detroit will hold a hearing whether the court will accept $50,000 cash bond posted on behalf of convicted immigration fraudster Rasmieh (Rasmea) Odeh, who never disclosed her Israeli conviction and prison sentence for killing to students in a supermarket bombing, and other offenses.

As summary of the fact of the case and her guilt have been addressed here many times. The hyperbolic propaganda campaign on her behalf by anti-Israel activists and websites is belied by the historical record of Odeh’s guilt.

After Odeh was jailed pending sentencing, her supporters launched a furious campaign claiming that she was was put in prison isolation (also called lockdown) as part of a targeting by the U.S. government and that her approximately two weeks in lockdown amounted to torture.

Deutsch suspects that the US Attorney’s Office and the Department of Homeland Security could be instigating the harsh treatment Odeh is receiving.

“I can’t say for sure, but it seems to me that they are targeting her because of who she is and what she stands for,” Deutsch said.

“It is heartbreaking, cruel, and outrageous that 67-year-old community leader Rasmea Odeh is being held in solitary confinement, now for 12 days. Authorities targeted Ms. Odeh, who was brutally tortured at the hands of the Israeli government, in a politicized trial as a result of her activism and continue to punish her behind bars. Solitary confinement is a practice with devastating psychological and physical effects recognized by the UN Special Rapporteur on Torture to be a form of torture. St. Clair County Sheriff Tim Donnellon’s decision to place a torture survivor in solitary confinement shocks the conscience.”

As with much of the pro-Rasmea propaganda campaign, the accusations take a kernel of truth (she was in lockdown) and then weave paranoid conspiracy theories around it.

I have obtained Odeh’s St. Clair County jail disciplinary records pursuant to a FOIA request. The reasons for her lockdown were simple: She was disruptive and uncooperative with prison guards, which resulted in her initial lockdown. Then she began to receive threats from other prisoners who read about her in the Detroit Free Press and on social media, so she was kept in lockdown as part of protective custody.

Here are the relevant records, with the names of jail employees redacted: 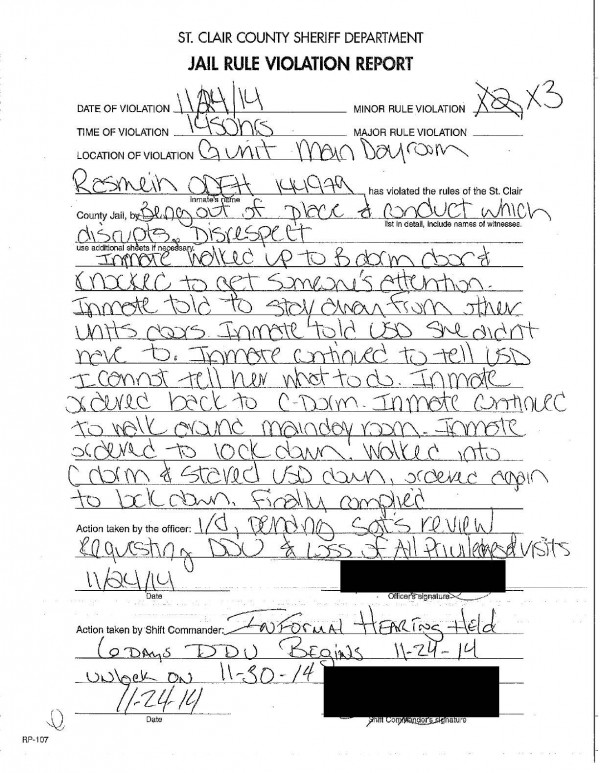 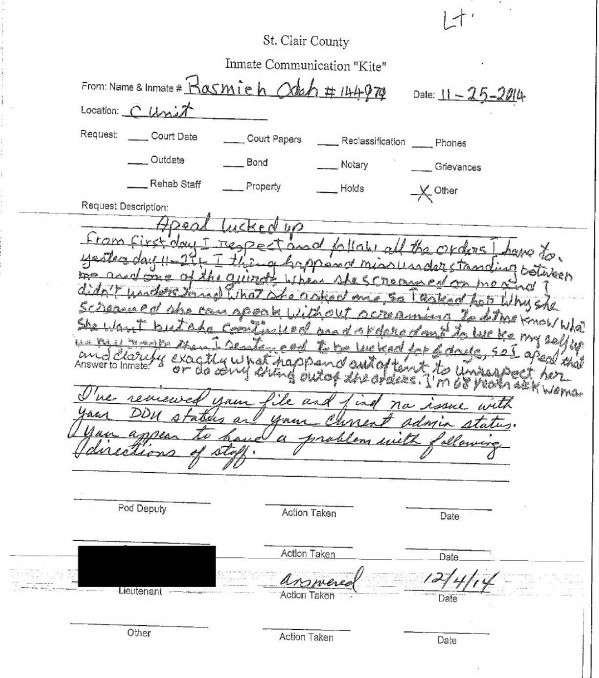 The warden had better keep her in protective custody. She’ll cause a riot.

They were just shooting video for weekend programming on MSNBC… LOCK DOWN !

Put her on a plane. Kick her out over Libya. You can give her a parachute.

Yea, I am about as upset about this as I am the Democrat hit job that is the Senates “post 9/11 torture report”. Which is to say: “Really they did more than just Water board people? Well good it was nice to know they were trying to protect us.

The same kind of chute D.B. Cooper had.

She seems to be hung up on only following the rules and instructions she thinks she “has to”.

Here’s the rule of thumb: you have to follow them all.

I guess in terrorist primary school they don’t make you go into time out if you are bad, lol.

Labelling that form a “Kite” is a good way to discourage their use. “Kite” is slang for using request forms to report internal criminal activity within the jail. It has the same general connotation as “snitch”.

The term kite in the prison where I worked was denoted as a letter/note from 1 inmate to another. Sometimes it was just BS, but most of the ones I caught were a specific message about a hit. Never heard of it being used as means of snitching.

But after 15yrs away, things change I guess.