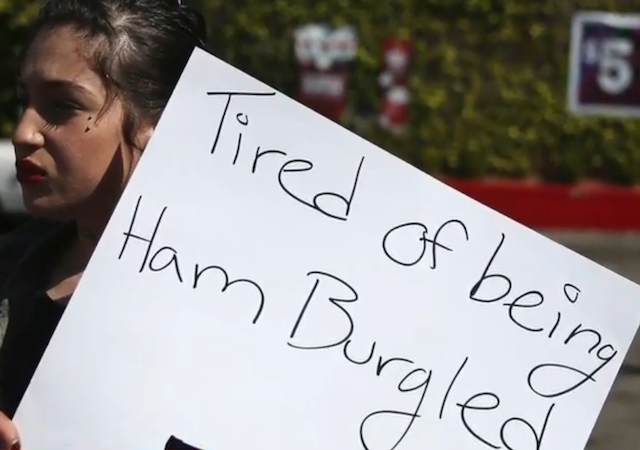 The NLRB has spent the past year doing their best to make it easier for union organizers to force workers into union membership. Their McDonald’s ruling brought us closer to mass unionization, and a new rule that was just passed seeks to speed up the union elections process:

The rule will require businesses to postpone virtually all litigation over eligibility issues until after workers vote on whether to join the union, thereby depriving management of a stall tactic that unions widely claim benefits the employer. In effect, regional NLRB directors will be given broad discretion to rule such litigation unnecessary until an election takes place.
…
The regulation will eliminate a previously-required 25-day period between the time an election is ordered and the election itself, and it will require employers to furnish union organizers with all available personal email addresses and phone numbers of workers eligible to vote in a union election. An NLRB decision handed down yesterday essentially prohibited employers from denying union organizers access to company email. The rule will also, for the first time, allow for the electronic filing and transmission of union election petitions.

You can call it a stall tactic, but it’s certainly a valid one, considering the demands union organizers make not only on employers, but on the personal privacy of employees. Now, employees won’t even have a choice when it comes to participating in the conversation.

Obviously, businesses and unions are at odds with each other over whether or not this new rule will help workers, or make it impossible for them to make an informed choice about unionization:

“Too often, lengthy and unnecessary litigation over minor issues bogs down the election process and prevents workers from getting the vote they want,” AFL-CIO President Richard Trumka said in a statement. “We commend the NLRB’s efforts to streamline the process and reduce unnecessary delay.”

Trumka said the union election rule will give workers an opportunity to vote “in a timely manner.”

But business groups say the rule is unfair because it will not give them enough time to prepare for union elections. They say it also say it prevents employees from taking time to consider all the facts.

They have coined terms “ambush” and “quickie” elections to express their frustration with the rule.

“Shortening the time frame before an election robs employees of the ability to gather the facts they need to make an important and informed decisions like whether or not to join a union and denies employers adequate time to prepare,” Jay Timmons, president and CEO of the National Association of Manufacturers, said in a statement.

What union organizers have never understood is the right of the worker to protect his own interests. Employees should be screaming about this rule not because it’s pro-union, but because it automatically assumes that a private citizen wishes to surrender their personal information, support, and decisionmaking power to an undeniably liberal private entity. Eliminating the waiting period between the election announcement and the election itself isn’t “eliminating unnecessary delay;” all it does is hand the union a trump card to pressure employees to get with the program.

We aren’t living in Upton Sinclair’s jungle anymore, but if the unions ultimately have their way, that’s where we’re heading.

this will inevitably lead to higher unemployment, and thus more people living on the government dole…

I wonder if any pissed off employees would be able to find some sort of grounds to sue either the unions or the NLRB for invasion of privacy? I know that unless I’ve personally expressed interest in joining or getting more info on the union and personally given said union my contact information, I do NOT want them knowing who I am, how to contact me, and potentially where to harass me and my family if I don’t support them.

We never did. Sinclair left a letter with his attorney to be opened upon his death. In the letter he admitted to lying throughout his seminal book, all in support of ‘the cause’. Ends/means calculations among libs remains historically constant.

Would that make Upton the Micheal Moore of his time?

The new NLRB rules have nothing to do with labor or the American worker in terms of motive. It’s the Democrat Party working through current ownership of the executive branch to reconstruct one of their major campaign revenue streams: union donations.

Moreover, obama’s moves to help unions is again against the will of the American people.

Abandoned by his party and the American people, and barely into a long lame duck period, the man has nothing to lose whatsoever.

It’s your right to vote (or not) as you wish, but that right doesn’t absolve you of responsibility for the consequences.

It’s hard to express the depth to which I loath unions and their supporters.

They are anti-liberty, anti-capitalist, bastions of immorality and pathetic behavior in general. It is surreal in my estimation that responsible adults work themselves into positions of power to destroy proper and good order.

“What union organizers have never understood is the right of the worker to protect his own interests.” The understand completely, they just don’t care. Union dues trump everything

There is a simple way to defeat attempted Union organization of a facility or business. I know, because I’ve had to do it more than once.

“I’m sure they Union is promising you the Sun, Moon and Stars, and I’m sure it all sounds wonderful. You should read whatever they promise you VERY, VERY carefully, and read the what you have to agree to in order to get those promises. Because while the Union Organizers will leave and move on to organizing the next plant after your vote, YOU will be here, and stuck with whatever that agreement says. And make no mistake, if the Union is voted in, Management WILL enforce that agreement TO THE LETTER. Consider strongly the flexibility you have now with your supervisors and managers. With a Union, all that goes away. No more individualized consideration, no passes, no second chances. Enforced TO THE LETTER. PERIOD.”

After a speech of that nature, I have never, not once, seen a Union get more than 10% yes votes.

Wait until employers get sued for disclosing addresses and phone numbers.

Just more of that “fundamental transformation of America” that we have come to know and love.