More boots on the ground than we can count! 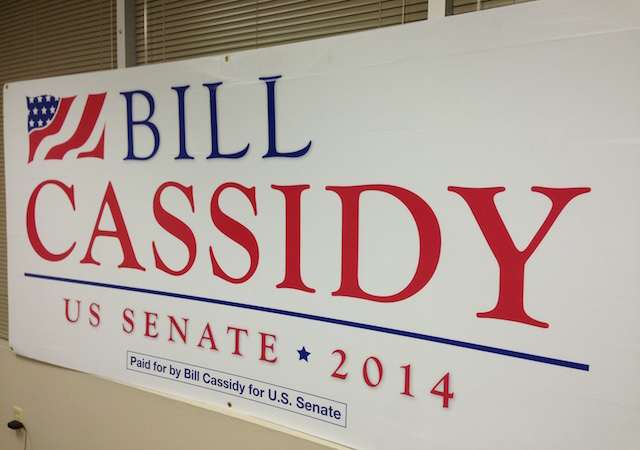 We’re just days away from the Louisiana Senate runoff election, and Mary Landrieu is in trouble.

Recently released polling data has Republican challenger Bill Cassidy up by almost 16 points over the embattled incumbent, and internal polling conducted by the Cassidy campaign is showing a similar lead. Although Cassidy has earned and maintained a nearly-unbeatable spread, he’s not leaving anything to chance.

I’m spending time in Louisiana this week campaigning for Cassidy, and I’m not the only “foreigner” putting her boots on the ground. Activists by the hundreds are busing in from all over the country to help Team Cassidy maintain their lead and secure a win in Saturday’s runoff. These people are motivated, excited about Cassidy, and ready to pound the pavement to secure a thin-but-comfortable majority +9 caucus for Senate Republicans.

Landrieu’s campaign has hit more pot holes than sweet spots in its effort to derail Cassidy’s fresh approach to politics (he’s a relative newcomer, with only six years in the limelight under his belt,) and analysts are racking their brains trying to figure out what sort of fever dream of a “strategy” could propel her to a win:

In the intervening 27 days, you’d be hard-pressed to find a single Democrat in Washington not named “Landrieu” even talking about the race and even fewer (if that’s possible) who think she has any chance at winning.

“I don’t know anyone outside of her staff who thinks she has a chance to win next Saturday,” said Bob Mann, a longtime aide to former Louisiana Sen. John Breaux (D) and now the chair of the Manship School of Mass Communication at LSU. “The hole is just too deep, the abandonment by white voters so complete. She cannot motivate enough black voters to make up for what she’s losing among whites.”
…
Conversations with plugged-in Democratic strategists paint Landrieu as a victim of a failed strategy — on her part and on the part of national Democratic officials.

Landrieu, according to these operatives, believed she would win the 50 percent plus one she needed to secure another term on Nov. 4 — and acted accordingly. “She thought she was going to win in November and spent that way,” said one Democratic consultant granted anonymity to speak candidly. The FEC reports bear out that failed strategy. As of Nov. 16, Landrieu had spent $16.4 million and had just $782,000 left in the bank.

Last night’s final debate between Cassidy and Landrieu reflected Landrieu’s sinking popularity and tanking confidence. Where Cassidy had replies, Landrieu had retorts; where Cassidy offered solutions, Landrieu doubled down on talking points that haven’t moved the needle in weeks, which should raise red flags for Dem supporters considering it was those same talking points that produced dismal results during early voting.

If the debate was ugly, it was only because at this point in the game, Democrats have abandoned Landrieu entirely, and she knows there’s no saving her career in the Senate.

Republicans, on the other hand, can already taste victory. I’ll be here all week covering the final push by the Cassidy campaign, so keep your eyes peeled for updates!

Right now there are only 2 things that can get Landrieu elected.

Their names are McConnell and Boehner.

Those 2 idiots doing more stupid shit like allowing Obama’s imperial amnesty to stand without a response is exactly the kind of thing that is going to get Republicans tossed out en masse in 2016 and give us an unholy 4-8 years of President Clinton II.

Olinser, you are right about Boehner and McConnell. However I tend to think it will not be Clinton II but rather Obama terms 3, 4, and 5; with 5 being for life. Keep in mind that he destroyed Article I, Section 8 of the Constitution and claimed all the enumerated powers of Congress by inventing a “sick and tired of waiting Clause” to the Constitution. When he comes up against the 22nd Amendment, I expect a “you gotta be sh*tting me” Clause to over-ride it.

Landrieu may hold on to her seat anyway, though.

Today one of Landrieu’s people openly called for Democrats who had already voted in early voting to go to the polls on election day and vote again. The slogan they are using is “one more can’t hurt” and promising that since the DA is a Democrat, that no one can be prosecuted.

The margin of fraud gets bigger and bigger because no one in the country is willing to push back.