It didn’t work in Vietnam or China either. 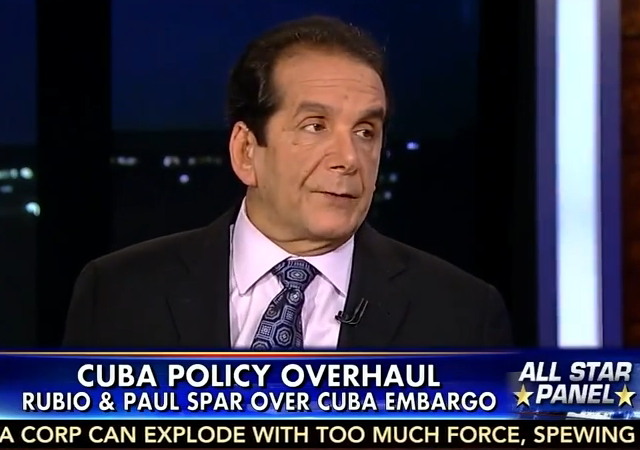 Last night on Special Report with Bret Baier, Charles Krauthammer commented on the economic aspects of Obama’s new policy on Cuba. Dr. K is skeptical and frankly, who could blame him?

“In the early days of the Cold War, the very early days, there was a semi-tongue-in-cheek proposal that, instead of having bombs on the B-52s, we ought to fill them with nylons and drop them over the Soviet Union. As a result, there will be a revolution, they’re going to become capitalists.”

“This is exactly the same idea for Cuba,” he continued. “It hasn’t worked for Vietnam or China, if your objective is to liberalize it. And the bulk of the benefit is going to go to the military and the repressive apparatus. That’s the argument against normalization.”

It certainly does seem like there’s more to the Cuba story, doesn’t it?

Let’s check in with Mike Gonzalez of The Federalist:

Why did President Obama go for broke on Cuba, announcing the United States would normalize relations with that repressive regime? The answer appears in his statement to the nation. There, the president not only made clear that this change has been on his bucket list for some time, but also that his knowledge of Cuba comes straight out of the international Left’s playbook.

“When I came into office, I promised to re-examine our Cuba policy,” Obama said, proving once again that last month’s midterm shellacking seems to have had an odd effect on our president. Rather than make him humble, rejection at the polls has liberated him to do all the things he wants in his “legacy.”

Obamacare and open borders policy are both ruling against the will of the people, and often against rule of law. Of course IRS terrorizing the tea party, or “justice” to provoking racial animus, also break the oath of office, yet are more condoned than condemned, at least by the adoring media.

But now the veil is dropped and Obama is free to release his inner Che. In return for bolstering the coffers of the Castro regime, I’d expect large donations to find their way to preferred leftists, such as Chinagate Hillary’s campaign. It takes an international village to raise a tyrant.

She says a great deal if you listen to her. None of it good if you care about Cuba or the U.S.

The Cuban Collective has plans for American money, and they don’t include anything like we want them to.

They will do what they always do with this revenue source:
1. use it to remain in power
2. use it to increase their military/police power
3. use it to bitch about how bad the USA is
4. put most of it in a bank

What they will not do:
1. Increase freedom in any meaningful way

China was too big (and they’ve come around).

VietNam was too small and it really wasn’t tried.

Of course capitulating as done by Obama “Jimmy Carter II” won’t help as they will feel (rightly so) that they “won” the argument so why should they change.

I’m pretty sure that the cuban government will screw this up though. They just can’t help themselves.

The majority of policy makers are all over 70 and are calcified in their views and unwilling and see no need to relax the rules.

And btw my guess is that Fidel is in a coma or unable to respond cogently which is why they feel comfortable accepting Obama’s cave in.

Let’s remember that this embargo has been imposed on both sides. If it weren’t for fidel, it would have ended years ago.

Lifting the embargo or not is pretty small potatoes. The embargo has been in place for decades to essentially no effect. That’s probably significantly due to the rest of the world ignoring the embargo and trading freely with Cuba.

On the other hand, the suggestion that lifting the embargo will lead to liberalization is fatuous. The rest of the world trading with Cuba has had no effect. Our trading with them or not will make essentially no difference.

Except maybe we’ll get some cigars.

Depends what you mean by “work”. If you mean “cause freedom and democracy to arise,” clearly Krauthammer is right; but has that ever been President Obama’s goal? If by “work” you mean “solidify in power the left-wing tyranny”, there is an excellent chance it will work.