There goes the narrative 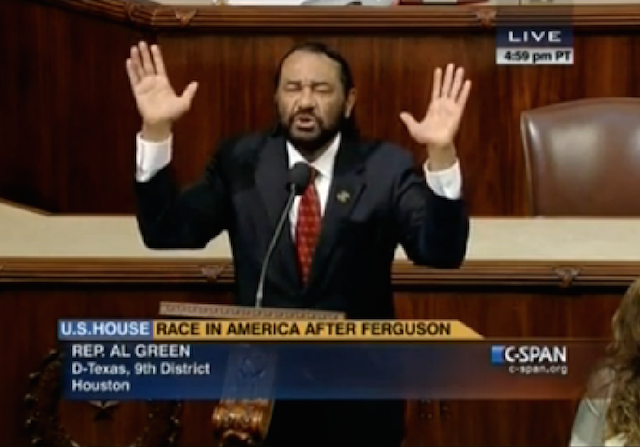 For all the spin the left has provided on the protests in Ferguson, Missouri, you’d think they’d have a little more respect for their own race-based premise.

Democrats in Congress probably thought they were performing an act of solidarity when they engaged in a “hands up, don’t shoot” protest on the floor of the House last night, but all they did was cheapen the efforts of actual protesters and make the popular “white cop attacks unarmed black teen” narrative that much more ridiculous.

Mediaite has the scoop:

Democratic members of Congress showed solidarity with Ferguson protesters tonight by making the “Hands up, don’t shoot” gesture on the House floor tonight.

New York’s Hakeem Jeffries and Yvette Clarke, along with Texas’ Al Green, all made the protest gesture on the House floor tonight. Green made the gesture in reference to what the St. Louis Rams did, but touted it as a “new symbol” of protest.

You can also watch the video here, via C-SPAN.

First of all, the narrative behind the the “hands up” protest has already been debunked by multiple outlets, so keep that in the back of your mind as you absorb what I’m about to say. This isn’t about reality; this is about the bubble that progressives have created for themselves.

A “new symbol of protest?” With the flick of a hand, what started out as a war cry-gone-viral has been reduced to a talisman in the war against general inequality and/or vague injustice, alongside Trayvon Martin’s hoodie and “#NOH8” scratched onto a piece of duct tape.

Hands up don’t shoot may be a lie, but so was “We had to destroy the village in order to save it,” and this was carried out in Ferguson.

Uh…I think this makes all Democrats doing that (and everyone else) assessories to the crimes.

The only persons (to the best of my knowledge) who ever fired bullets in the House of Representatives – at Members themselves, striking several – were members of (what are considered today) “minorities.”

It should at least be instructional for black men (or anyone) committing crimes (or minding their own business).

“This is what you do when an officer approaches you with a gun drawn”.

I had two cops show up at my front door, with guns drawn. There was a door sized window next to the door … so I opened the door and started hitting him instinctively showed him my hands, then opened the door. They were responding to an alarm, wrong house.

“Hands up … nobody gets shot.”

Oh and he wanted my ID, (he was not acting stupidly, except for the wrong house part) … so I called him some names and refused … “Don’t you know who I am?” … got him my ID.

Some of these House members are just flat out morons… truly idiots who don’t know any better. And then some are just race-baiting, agitating lying scum. I wonder which category these two fall into?

My fear is the whole internet will become so overly populated that it will tip over and capsize.

This is America and stupid people deserve representation too. It is just a question of how much representation. I always thought Senator Patty Murray had enough stupid to represent several hundred thousand stupids but, when you throw in Barbara Boxer along with your short list, I am beginning to think they are way over represented.

Make SURE you record the response.

This needs to be the standard meme, making this the Alinsky ju-jitsu for this nonsense.

Or, “How many illegitimate children do you have that you are not supporting?”

Shouldn’t be “Hands Up” with cigars in your hands?

If blacks in congress can express their opinion via a hands-up gesture, where are our representatives expressing our views in opposition, with a more standard American hand gesture: the stiffly extended middle finger?

Same for fans at football or other future sports venues to ‘hands-up’ expressions of support for the Ferguson protestors. And for the protestors themselves: middle fingers extended!

Hey, where is this clown’s Trayvon Martin hoodie?

Hands up with a hammer in each hand would be more representational of an actual occurrence.

Don’t you know Rep. Hakeem Jeffries and Rep. Al Green woke up one morning and said “Hmmmm. How can I get my face on the TV today? Hmmmm. . . Hey!”

I’d wager that far more unarmed white people are killed by armed blacks than the reverse. What’s the gesture for #HeresMyWalletDontShoot ?

The black community* never misses an opportunity to show their worst. They can’t even wait for something to pass into history before revising** it. They revise** it as it’s happening, which is a way to also revise the next one – before it has even happened.

*Black community defined as the sum of pro activists, urban street level sheep, and their enablers in the media and political office.

**Defined as flat-ass lying about it.

you can’t cheapen a racial slur used to attack the police … hands up, don’t shoot was already at the bottom of the barrel … they really can’t cheapen it further …

Welp, we’d best get the NSA on this, because it’s obviously a deep, dark secret.

Is hands up don’t shoot supposed to be sarcasm now?

Was Ebonics not successful enough at eroding our language structure?