Hillary – America Must Empathize With its Enemies

Hillary – America Must Empathize With its Enemies

“This is what we call smart power.” 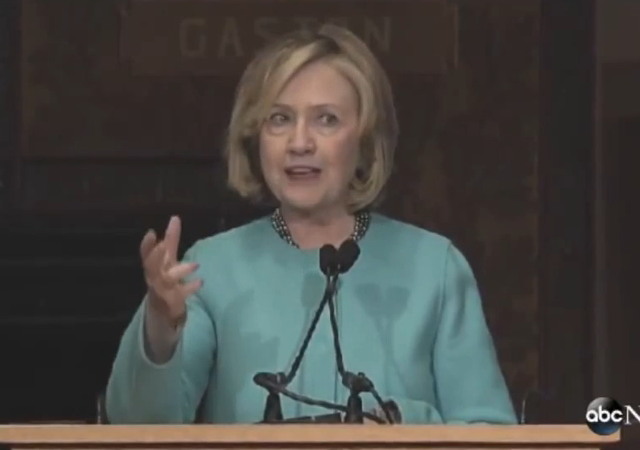 In her sparsely attended speech at Georgetown University this week, Hillary Clinton gave attendees a glimpse of her views on foreign policy and national defense by saying America should empathize with its enemies.

This leads to a natural question: How does one “empathize” with ISIS terrorists who are currently beheading and crucifying their way across the Middle East?

It’s difficult to know where to start with this nonsense from a recent speech given by Hillary Clinton, in which the presumed Democratic front-runner finally defines what she sees as “smart power,” and what she claims is a 21st-century approach to diplomacy. In large part, the former Secretary of State says it means psychoanalyzing enemies to understand them better, which … is exactly what nations have been doing for centuries, if not millenia.

This world view reminds me of another Democrat who’s not running in 2016:

Back in 2007, Patrick caused a stir by suggesting the attacks of September 11 were caused by “a failure of human understanding.”

Patrick fends off critics of 9/11 speech

Governor Deval Patrick tried yesterday to fend off criticism he has received over his Sept. 11 memorial service speech, when he said the terrorist attacks six years ago resulted in part from “a failure of human understanding.”

“Frankly, I was taught in my church that all violent attack is a failure of human understanding,” he said during an appearance on WTKK-FM radio yesterday. “The families, in the time I spent with them that day after the ceremony, were just absolutely lovely and appreciative.”

Presiding over the state’s memorial ceremonies for the first time, Patrick on Tuesday morning called the events of Sept. 11, 2001, “a mean and nasty and bitter attack on the United States.

“But it was also about the failure of human beings to understand each other and to learn to love each other,” he said. “It seems to me that lesson [of] that morning is something that we must carry with us every day.”

Terrorists are just mean and nasty so we should empathize with them. Right?

Keep this, just in case she does decide to run. It will finish her off.

Ah, Hillary, we hardly knew ye – and will be forever grateful for that much.

Sadly, this is the new America. It is now “Ask not what you can do for you country; ask what your country can do for you.” It is an America where throwing up nonsensical flak such as vote for revenge or vote with your bodies carried the day in 2012.

I fear the promise government transfer payments matter more than anything to many voters.

“Showing respect even for one’s enemies. Trying to understand, in so far as psychologically possible, empathize with their perspective and point of view.”

I can kind of “empathize” with ISIS.

If I were that sick, I’d want some kind person to put me out of my misery before I could do more horrific damage.

And I am a kind person.

I’ll empathize with ISIS members only after that organization and its leaders are annihilated. Empathize and negotiate from a position of both strength and superiority.

Col. Ralph Peters has the best idea of how to handle ISIS and any stray goats.

Does that mean she now empathizes with Monica?

She is astonishingly stupid and dangerous.

I’m supposed to empathize with an organization that believes it’s morally justified in sawing off a person’s head because of their religion and nationality?

I don’t empathize with freaks who rape little girls and slice off their heads for the offense of not being Muslim.

And I don’t want a president who does either.

Well, we’ve already been told that every cop is a criminal, and all the sinners saints. Might as well have some courtesy.

And Hillary is what we call a “dumb broad”.

Actually I think the word that best describes her begins with a “W.” This is a woman who put up with decades of abuse by her serial rapist husband in order to hang on to the money and power that went along with being a “Clinton.” There is a word for women who debase themselves for financial gain.

Wasn’t she presented as the smartest woman in America? Oh, but what difference, at this point, does it make?

Empathy: Understanding what others are feeling because you have experienced it yourself or can put yourself in their shoes.

Makes me wonder how she screwed over people in government and who they were to get what she wanted.

Hillary promised the women of Afghanistan she would stay the course, not leave them vulnerable to the Taliban that would return when USA was gone. She sounded quite empathetic … does she plan to stay in Afghanistan?

Hillary’s political female enemies were those that Bill allegedly abused. Did she empathize with them as she stood by her man? Most think she tried to destroy them.

“America should empathize with its enemies.” Oh, shut the f*ck up!

Will she come out with a retraction/explanation? Only if the MSM picks up the story, which I doubt they will.

I find her quite seductive.

Several of us who care about you are considering an intervention and a treatment program….

You missed his subtle point.

You have my sympathy!

So do I. She is. “The devil hath power to assume a pleasing shape.”

Like staring into the eyes of a female vampire?

Sorry, my brain was hurting.

Now empathize with that.

Henry Hawkins has volunteered to empathize!

You missed his subtle point.

Clinton and Patrick make perfect sense inside the world-view of Globalism: no nation states, no national sovereignties, no religions or morals or perversions thereof, no ideologies, no right or wrong, just power for me and obedience for you. Communism rebranded. After 170 years of the consequences of that world-view, there is only one response to it.

America is ready for Hillary…. to go away.

How to explode Rags’ head in just two words:

Henry, you owe a lot of readers a bottle of mind bleach each.
Miley was bad enough, we did not need that mental image.

Henry, you are an evil man. I howled so loud with laughter I think I hurt myself!

This is talk for the hippie faction of the ‘rat base. She’s running, and the campaign started in Benghazi.

She must actually believe her own press. This woman’s stupidity knows no bounds.

I’m not gonna empathize with head choppers, defilers of women, cult fanatics, of wannabe dims that “feel” I should.

“Frankly, I was taught in my church that all violent attack is a failure of human understanding.” Deval Patrick heard the words but missed the message. The words he needs to hear are those that teach Islamists to hate Jews, Christians, and a wide range of others. Lullabies, cartoon strips, puppet characters – a la Sesame Street’s – television, schools, and books preach and teach hatred from infancy. It is constant and unrelenting. Patrick and the entre progressive, elite establishment are uninterested in those words. They make it about their words because it makes them feel superior. The mirror image of this is that they actually believe themselves (and us and me) to be responsible for the 9/11s; the beheadings; the slaughter of Jews, Christians, Druze, and untold other groups; the stoning death of women; the hanging of gays; and mass murder of, apparently, anyone who happens to be around at the moment.

Deval Patrick is the classic elite politician who today, refusing to fight words with words (or any other way), would not fund even the equivalent of a Radio Free Europe, who would not encourage and support a free press in the Middle East, or South and Central America. Deval Patrick is all about words, not messages and understanding. Deval Patrick won’t understand violence the day they come for him.

Did we ever doubt that this was the leftist America hating agenda?

Do you have any “executive experience” ? How big was this organization (people/revenues) ?

What was the hardest non-governmental job you ever had ?

Are there any assurances that appear to have been inferred or implied during the campaign that you feel you won’t be able to back up with action once in office ?

As far as I know there is no official definition and I’ve been told in some languages it is just not defined, so please .. define “fair”

Who are the “middle class” ? Be specific

What kind of grades did you get in school for “working well with others” ?
Give an example of how you work with those whom you don’t agree.

Are you a “victim” ? If so, why should anybody ever elect a “victim” as President and Leader of the Free World ?

what is your plan to deal with a Higgs Boson disaster ?

No, Hillary, that is what we call dumba$$ power.
Your former boss the King/Dictator of America has been doing that for 6 years.
With not exactly positive effects.

Hopefully Hillary is talking herself into the ash bin of history. Along with her leftist ideology.

Citing ‘smart power’ was a big mistake. Hillary is apparently unaware that thanks to her and Obama’s work in office, ‘smart power’ is a phrase of pure sarcasm, dripping with irony. She beclowns herself and is unaware of it.

Somebody check her heel for trailing toilet paper.