“Give me your tired, your poor, your illegals!”

“Give me your tired, your poor, your illegals!” 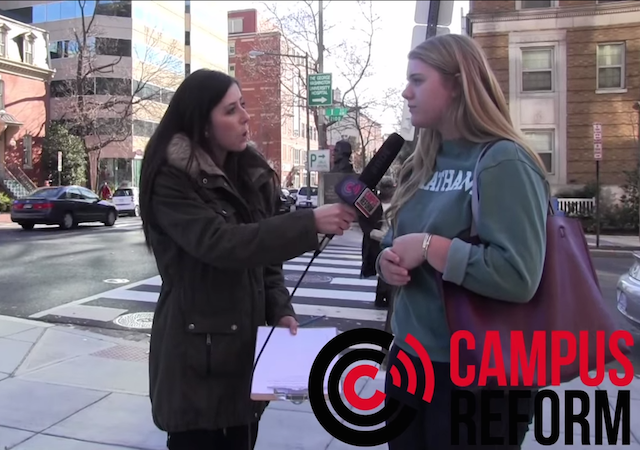 During my time in academia, I rebuffed a lot of garbage petition solicitations, but I never saw anything as ridiculous as the statement George Washington University students enthusiastically supported this past week.

Campus Reform headed to GWU’s campus with a petition demanding President Obama address the illegal immigration crisis by initiating an “exchange program.” As in, deport one citizen, let in one undocumented immigrant.

Crazy, right? Not to this student body!

“Please sign our petition for President Obama to deport one American citizen, in exchange for one undocumented immigrant,” read the petition. “Everyone must be allowed a shot at the ‘American Dream.’ Americans should not be greedy. Let us right the wrongs of our past and make another’s dreams come true.”

“It makes sense,” one student told Campus Reform. “Like, I’ve noticed that there is a lot of like hatred against undocumented immigrants and it’s not necessarily their fault.”

“Everybody deserves a shot and we shouldn’t rule anybody out,” said another.

After some consideration, a female student decided signing the petition was best in the name of social justice.

“If somebody were to sign up for this program and they were going to go through all the effort to become this one undocumented immigrant than I think that’s enough will power and enough desire, they should be able to come in,” she said.

Two-thirds of the people Campus Reform talked to signed on to this nonsense. Watch:

Stop the world, please. I want off.

This is nothing new.

I’ve always said that anybody who ever learned anything at a university … left. Only the stupid ones are still there.

That’s intentional. Colleges do not seek to teach people how to think or even to equip them with the knowledge to enable them to think, but instead they teach them what to think. Colleges are little more than factories of ideology, teaching narrow viewpoints without teaching the ability to understand or evaluate the meaning of those beliefs.

That, like the Jedi Mind Trick, is for the weak minded.

It’s probably just me, but after they signed, I would have told them – “Pack your bags, your plane leaves for Honduras tomorrow”.

You beat me to it!

Beat me to it also. I woulda told ’em “You just volunteered for the exchange”!

Honduras? I was thinking of some place that more closely resembles the type of society they find ideal, such as North Korea or Iran.

They picked Honduras because Barry and Hillary are still trying to punish that country for following its constitution and ousting its socialist, power grabbing president in 2011.

Can you think of a worse punishment than sending these intellectual giants to live there?

I’d like to know how anyone so freakin’ stupid can get themselves out of bed, get dressed and find their way to a public street to make such asses of themselves?

It’s why public schools are referred to as idiot factories. These kids are produced on an assembly line where they have been told what to think, not how to think. The interviewer is simply telling them what to think, exactly as their teachers have done for the past 13-16 years.

This is what indoctrination produces – completely ignorant pawns who cam only react to key words rather than think critically. My guess is if you quizzed them a bit further about about their understanding of our constitutional values they would stare blankly at the words and be unable to produce a coherent train of thought. If our Founders were correct that freedom and liberty require an educated and diligent population then we are doomed as a country with this generation. Fortunately for me I may not be around to see this collapse.

Two-thirds of the people Campus Reform talked to signed on to this nonsense.

If they had suggested deporting one “right-wing tea party Republican” for each illegal, they would have had a 90% sign-on rate.

What they should have done is after they sign tell them thanks for volunteering and INS will be by within the next week to collect them for deportation. Then watch the hilarity ensue.

American “leaders” (e.g. Obama) support DRAT. Second and third-world “leaders”, as well as the Roman Pope apparently, support DRAT. It seems that there are few leaders interested to address issues on merit.

I’ve always wondered: How many intelligent, literate people do they have to edit out in order to present these mental midgets? They can’t all be that stupid!