The news is bad, but at least the plane has been found 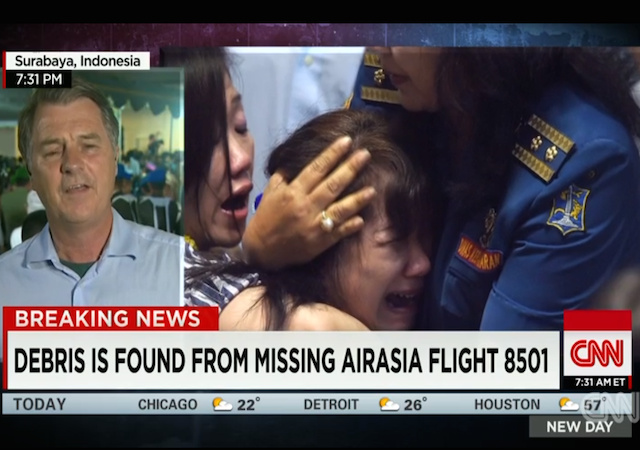 Ordinarily one wouldn’t think that news of wreckage and multiple bodies being pulled from the sea could be classified as “good.”

But given what we already very strongly suspected—which was that AirAsia Flight QZ8501 had crashed, and that the likelihood of survivors was very poor—and given the continued unknown whereabouts of Malaysia Airlines Flight 370, the news that the wreckage of QZ8501 has been found and that 40 bodies have been recovered so far can be considered “good” in the relative sense, despite its horrific nature.

There was always more hope of finding this plane than of locating Flight 370. We didn’t know much about QZ8591, but at least we knew that it had encountered bad weather, and that it had probably gone down suddenly in waters that were less than 150 feet deep. Had it not been for the mystery of Flight 370, it would have assumed that QZ8501 would have been found in due time. That is what has happened, and there is every reason to suppose that the flight data recorder and cockpit voice recorder will be recovered and we will learn the most likely cause of the disaster.

The plane was found about six miles from where it lost radio contact with the ground, and there are reports that a plane-shaped “shadow” can be seen under the water. In addition:

Geoffrey Thomas, editor of AirlineRatings.com, told Sky News: “We have a radar plot which shows the plane actually climbing through 36,300ft – it wasn’t given permission to do that.

“It also shows that its speed had decayed by 134mph and dropped dramatically to a level where it couldn’t sustain flight.”

Officials have not yet spoken of survivors, and are prioritizing retrieving as many of the passengers as possible:

RIP to all the victims, and prayers for their grieving families and friends.

yup and an iced up pitot/static system indicates false speed and alt.
really want to see what fdr shows.

The news is, however, unequivocally bad for CNN.

On a more serious note, it’s very unfortunate, my sympathies for the families, and it’d be nice if they could do more to prevent such crashes with Airbus jets.. since it seems like a bit of a trend.

Er, training the pilots not to stall their planes would be a start, as ThomasD alludes to above..

Flying into a thunderstorm is never smart, and the pilots should never have done it, regardless of what ATC told them. We may have another instance here where Asian pilots would rather die than “lose face” by going against their “superiors”. I am reminded of the Asiana crash at San Francisco where the pilot knew he was too low but didn’t want to offend his Captain by pointing that out to him.

until we get the fdr and (hopefully) cvr we know NOTHING.

So some ATC denied an urgent pilot request to fly higher to try to avoid the storm? Wonder how that ATC is sleeping these days ….

BS. Pilot declares emergency and he can do whatever he wants. Pilot is responsible for all aspects of safety of his flight. It is up to ATC to deal with what he does.

Walls, the news report I saw on that said they were denied because of other air traffic above them, to the tune of six other airliners nearby.

My condolences to the families, and I hope they get the peace of at least knowing what happened to their loved ones.

We don’t know what happened, yet.

Neo is right…this is a huge relief. My heart goes out to the families of the passengers. What an emotional rollercoaster they’ve been on.

I worked airline reservations for years. The worst nightmare of a reservations agent is putting a passenger on a plane that crashes. We helped him make the choice to board that particular flight. I imagine the ATC who denied the change of altitude isn’t sleeping well these days.

JBourke, you don’t know much about aircraft instrumentation, do you?

I don’t know much about aircraft instrumentation. I know enough about principles of flight to know that stalling a plane is bad and is to be avoided. I thought the issue might be more complex than that at first; on second thought, maybe it isn’t. Hard for me to say.

From what little I’ve heard, there was no “mayday” call-out. This suggests a “catastrophic event”.