“All of these people knew exactly what we were doing.” 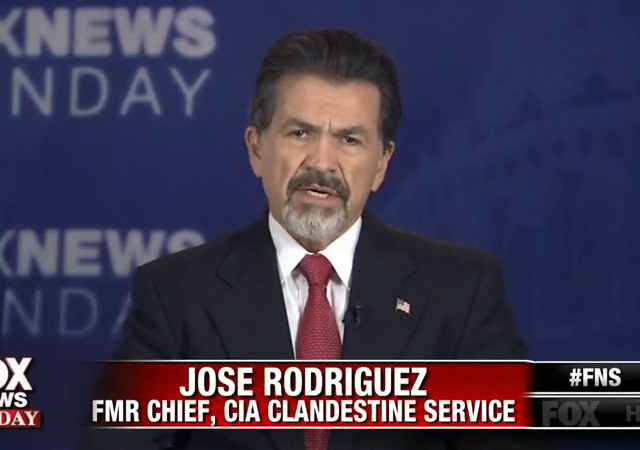 Democrats are trying to make political hay out of the recently released and highly partisan “torture report” even though they were briefed on enhanced interrogation techniques as far back as 2002.

Former CIA official Jose Rodriguez, who oversaw counterterrorism from 2002 to 2004, appeared on Fox News Sunday today. When asked directly by host Chris Wallace who knew what and when, Rodriguez was explicit:

“These people were fully aware of all of the techniques that were given to us and approved by the Office of Legal Counsel at Justice,” Rodriguez continued, saying that neither Nancy Pelosi nor other Democrats — with the exception of then–California congresswoman Jane Harman — “ever objected to the techniques at all.”

Rodriguez alleged that some lawmakers, such as Democratic West Virginia senator Jay Rockefeller, actually pushed the CIA to be even harsher. “All of these people knew exactly what we were doing,” he said.

Democrats are acting like this is all news to them.

Consider this column by Senator Dianne Feinstein which appeared in the San Francisco Gate on Friday:

Torture report is about us, not enemies, and we must enact reform

On Tuesday, a five-year review of the CIA’s detention and interrogation program was finally made public, drawing back the curtains on a very dark period of American history. The purpose of making this report public is simple: to ensure something like this can never happen again.

The 500-page executive summary that was made public is part of a larger 6,700-page review of a CIA program that included clear examples of torture, far outside the bounds of American values.

It’s important to remember the study is based on CIA’s own records: 6.3 million pages of the CIA cables, memos, reports, e-mails and other documents. These records from the very time the actions took place — appear extensively in the report’s 38,000 footnotes.

Many of these records were disturbing, at times deplorable.

This is all about politics.

Democrats are simply trying to erase their involvement in these events.

WH Aide: Sir, these polls are awful. We are losing in the Middle East, Russia is whipping us like a rented mule, people hate Obamacare and Executive Amnesty, and we have race riots across the nation!

BO: Call Reid, tell him to release that Senate Intel hack job on Cheney. We’ll just have the media change the subject to
waterskating.

BO: Have my clubs been cleaned up? There’s a green stain on my 1-wood. I hate it when the Secret Service doesn’t do their job.

Pure comedy gold. Thank you for that! -:)

They also knew about Fannie, Freddie et al, and the enormous leverage in the system, that concluded with yet another massive adjustment. An adjustment that happened to cut off many Democrat interests at the knees. While I will not absolve Republicans, the Democrats were up to their necks in the financial crisis and executing the war on terror.

That said, why did the CIA use foreign facilities? They could have used Planned Parenthood et al and really put the fear of abortion through lethal injection, decapitation, and dismemberment… I mean, God, into them. We really need to sit down and discuss distribution of responsibility and attribution of motives.

So it’s all a partisan game, then. So much for “Legal Insurrection,” then. Flip side of “Think Progress.”

What are you mumbling about here…???

Lets make no mistake about it, WE ARE IN A WAR against Islamic fundamentalism and to be perfectly honest they ONLY thing I care about is winning that war!

I dont really care how we go about it, all I care about is winning and if that means having to rely on men to do evil, violent things to our enemies so that we can sleep safety at night pontificating on the intraweb about how awesomely right we are then so be it!

Why are the methods used to abort children not considered torture? Where is the moral indignation Dianne, Catholic Dems?
Hypocrites, all.