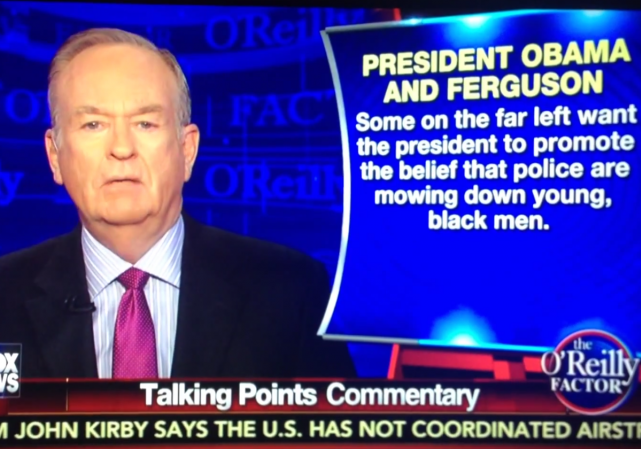 Bill O’Reilly focused on the ongoing Ferguson Grand Jury kerfuffle in his opening segment last night, revealing in stark detail the contrast between the reasoned perspective of those accepting the facts and evidence presented to the Grand Jury as well as their decision and the inanity of the reason-free “Hands Up, Don’t Shoot” crowd.

First up was a audio recording of former NBA player Charles Barkley speaking on a radio program (2:05):

Then was then contrasted with the ramblings of Louis Farrakhan, leader of the National of Islam (2:35):

As long as they kill us and go to Wendy’s and have a burger, and go to sleep, they gonna keep killing us.  But when we die and they die [applause] they soon we are going to sit at a table, and talk about it. We’re tired. We want some of this earth, or we’ll tear the God-damned country up.

This was followed by two live guests (starting at 3:45).

The first was Alfonzo Rachel, a pro-gun rights black man who is a commentator on PJTV.  He spoke about the fact that the black community complaining about the “system” in effect voted for that system or alternatively opted out of the system.  O’Reilly rather foolishly argued the because blacks make up only 13% of the population they can’t really change the system–ignoring, of course, that in the most crime-plagued communities blacks generally make up far more than 13% of the population.

Following Rachel was someone called Michael Skolnick, who was described as the President of something called globalgrind.com.  O’Reilly also mentioned that Skolnick was one of the invitees to one of Obama’s three “Ferguson” meetings yesterday.  Skolnick essentially followed the Progressive narrative that the Grand Jury decision was defective because, among other things, the prosecution did not present a case that was “fair to the [Brown] family.”

Asked by O’Reilly if he was aware of any evidence that was not presented to the Grand Jury, Skolnick replied “yes, the law, that it’s unconstitutional, 1985, that a police officer could shoot a fleeing suspect.”  When O’Reilly pointed out that both witness and forensic evidence indicated that Brown was approaching Wilson when killed, Skolnick first simply repeated the “fleeing” canard, was corrected again, and then decided that the Grand Jury wasn’t good enough, he wants a trial.

(Of course, the reference to Tennessee v. Garner is irrelevant to the Brown shooting, as it applies only to non-dangerous suspects, which Brown certainly was not.  We covered this issue extensively here:  Yet another reason Lawrence O’Donnell is wrong on #Ferguson Grand Jury.)

Asked if he supports the Grand Jury system, Skolnick replied that he did, but he nevertheless wants a trial.  Oofah.

It takes little cognitive function to understand why those who profit from racial strife would prefer that the #Ferguson shooting be dragged out for as long as possible, due process and rule of law be damned.

IOW Skolnick is a f*kstick.
damned tired of people like this.
and that blowhard running the show should check the population of the town involved regarding voting/elections/etc.
iirc ferguson is 72% or so black (if wrong please correct me) yet have no voting voices?
thats due to either apathy or criminal convictions.

OR approval/contentment with how things are being run.

OR a feeling that they can’t change stuff, which is nobody’s fault but their own.

must be the insidious lack of proper photo ID, the master stroke of the evil white devil in silencing the black voice…or some such nonsense as that.

He has NO idea what he’s talking about, but he’s PLENTY MAD about it.

Most amazing to me is that this is a clear case of a cop that obeyed all the rules, and gave Brown extra chances to stop, even knowing first hand how dangerous Brown was, and with fair certainty that Brown had just robbed that store.

Yet even with that legal clarity, we have the national black “leaders” demanding an eye for an eye “tribal justice”, and total abrogation of Brown’s responsibility for his assault on the officer.

The (alleged/apparent) stand down orders for the national guard seemed aimed at handing the looters their fiery “mob justice”, as even the market Brown robbed was left unguarded. FOX cameras were on the scene of that focal point, but no authorities.

And this is the case Obama/Holder hang their hat on, claiming it represents some broader issue of racist police departments. Indeed it is indicative, in that it demonstrates the racism/opportunism of the race industry, which is incited right from our once esteemed oval office.

At this point I’m heartily in favor of tribal justice.

Let’s see how it works out when 87% of the population exacts tribal justice from 13%.

“Of course, the reference to Tennessee v. Garner is irrelevant to the Brown shooting, as it applies only to non-dangerous suspects, which Brown certainly was not.”

ianal, and what I know on this subject I attained mostly on this site.

But I’d say SCOTUS does apply here in a sense. Rather than arguing that particular ruling merely does NOT apply, it seems to me SCOTUS ruled that society may indeed be well served by shooting a fleeing violent man in the back.

The specific exclusion of the non-violent equals the inclusion of the violent. ? And I’d stake my several hours of blog training on that opinion. 😉 I don’t know if a non-ruling like that holds the same weight, but obviously they declined to rule it out, so their ruling is applicable to Ferguson.

In any case, Wilson was graciously lenient after the first assault, and paused during the second assault, not fatally shooting Brown until he was only feet away. At that point Brown was less than one second away from his goal of smashing his 295 pounds full speed into officer Wilson, smashing him against his cruiser, and then God knows what else.

Yet if one of the Obama/Holder inspired mob managed to execute reasonable cop Wilson, there would be great rejoicing in the inane part of the enraged black community.

So Wilson made a deliberate decision to chase rather than legally shoot the fleeing dangerous giant. The SCOTUS case is directly relevant to a violent suspect, and Wilson’s state of mind in showing discretion. And for calming the inanity of crowds, or in front of Holder’s Ministry of Truth.

Actually, reviewing the TN vs Garner link, SCOTUS seems more affirmative than I had recalled.

“We conclude that such force may not be used unless it is necessary to prevent the escape and the officer has probable cause to believe that the suspect poses a significant threat of death or serious physical injury to the officer or others.“

Well, THAT and control. The EO would require LEOs to account to the Feds for their conduct.

Michael Skolnik is a fool.

Never heard of him before, but I am darn sure I just saw him make a fool of himself on National TV.

He should get a tattoo across his forehead.

“Asked if he supports the Grand Jury system, Skolnick replied that he did, but he nevertheless wants a trial. Oofah.”

That is an amazing bit of illogical logic, somewhat like “I support people’s right to smoke, just not inside or outside.”

Kind of like those that say they support the 2nd Amendment, but in the same breath list the guns they want to ban?

Wilson cited his fear of Brown using the same unhinged aggression on his fellow officers as they came for backup, and never knew with certainty that Brown wasn’t armed in some way.

Er, meant that as a reply to Midwest Rhino above re: the supreme court precedent that shooting is justifiable if it reasonably is meant to prevent harm to others. But of course Brown was not fleeing when the shots outside the police vehicle were fired. He was assaulting.

Mas Ayoob says, “A person going for your gun is a person going for a gun.” Those types of people should be shot. Because Brown had already made an attempt to seize Wilson’s sidearm, Wilson could assume that if Brown made contact with him again that he would make another attempt. Wilson couldn’t allow that to happen; it would have put his life in danger, and the lives of anyone else an armed Mike Brown may have run into during his subsequent escape.