European Diplomat: Of course we hold Israel to a higher standard

European Diplomat: Of course we hold Israel to a higher standard

“this is because you are one of us” 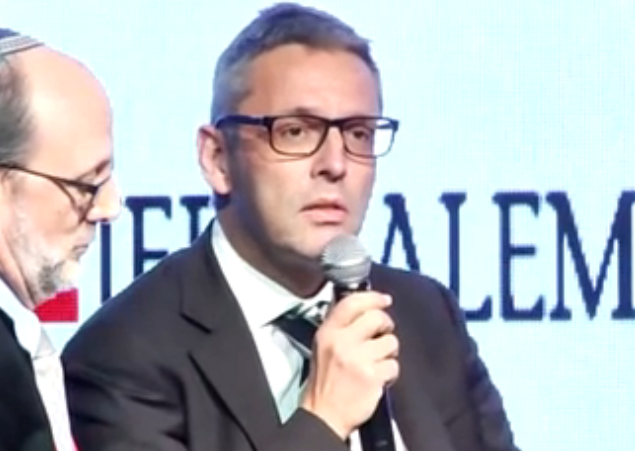 We know that Israel is held to a higher standard of conduct than the Palestinians and its neighbors.

A Danish diplomat, in a troubling yet refreshing admission of the obvious, admitted it at a Jerusalem Post forum, and Caroline Glick blasted him:

Europe should apply a double standard to Israel when judging its actions compared to other Middle Eastern nations, Danish Ambassador Jesper Vahr said on Thursday, causing sparks to fly at the Jerusalem Post Diplomatic Conference in the capital.

“Israel should insist that we discriminate, that we apply double standards, this is because you are one of us,” Vahr said during a panel discussion on relations between Israel and Europe.

Israel should want to be held to European standards, not Middle Eastern ones, he said.

“So I think you have the right to insist that we apply double standards and put you to the same standards as all the rest of the countries in the European context.”

The ridiculous aspect to all of this is that if one judges Israel by the same aspect as Western democracies, Israel comes out just fine and probably ahead of most. No other Western country is under such direct mortal threat and responds with such respect for human life and welfare.

While Europe has surrendered to Islam, Israel continues to resist it.
Danish Ambassador Jesper Vahr NEEDS to open his eyes…

“[T]his is because you are one of us,” Danish diplomat Vahr said.

And if I could finish that thought for you, Herr Vahr, “and Muslims, well, they’re, they’re – what’s that word that Pam Geller so accurately uses – they’re – oo, oo, now I remember – savages.”

And who here is doing the “other-ing” when just this morning he was signing the Multiculturalism theme song that All Cultures Are Equally Valid.

The left makes me sick. And the Muslim will make me and Israelis/Jews dead.

I wonder if Herr Vahr remembers how much Europe loved the Jews in Europe and Palestine back in the ’30s.

He should be ashamed of himself.

I’m a Christian and I was reading that and going, “Dude, you’re a piece of work.”

His country was one of the very few, meaning one, that had nothing to be ashamed of. The Channel Isles turned Jews over to the Nazis.

They do not have nothing to be ashamed of. They had no problem turning over non-Danish Jews. They only protected their own; and they’re not the only ones to have done that — the Bulgarians did the same, protecting their own Jews while turning over all the Jews of Macedonia.

First let Denmark have Israel’s neighbors, and then draw conclusions?

Euros just love weasel words. That, plus the Euros will not even try to defend themselves. We, the USA, made a huge mistake years ago with our NATO concept, playing policeman for Europe and elsewhere.

Ms Glick is correct with everything she said.

Israel itself should continue to remind Europe that Israel has the inalienable right to exist and defend itself; and to further admonish Europe for enabling the terrorists of Gaza and the West Bank.

I only wish that the USA would be a stalwart supporter of Israel, yet under Obama, that is definitely not the case.

It’s always struck me as odd to hear Israel hating Westerners tell Jerusalem that they have to use “proportional force” in responding to the PLO and Hamas’ use of rockets to kill Israeli civilians–as if to suggest that there are qualities of causing death on someone that demands parity in the methods employed.

I would imagine that if Danish civilians were attacked by Hamas by the use of rockets, the Danish would blindfold their troops and arm them with slingshots, so as to not “escalate” the level of violence.

God Bless Caroline Glick for telling it like it is. I wish I could have heard the response of the Europeans to this!

I seriously wonder if the Danes would field any resistance if they were attacked.

Same with the rest of Scandinavia.

You know the answer to that — they fielded no resistance against Germany, because they realised there’d be no point. They had no chance, and the Germans had no desire to harm them, so they surrendered immediately. You can’t blame them for that; but it does mean they’re in no position to judge those who can defend themselves, and who can’t afford to surrender.

A “higher moral standard” that amounts to suicide.

The kindest interpretation is that he is a moral cretin, like most of Europe’s ruling elites. But more likely is something far worse.

A suicide that would suit Europe just fine.

Holy crap. Is that what passes for a diplomatic statement in Copenhagen? How could he have thought that was a good idea? It almost makes me think he and Glick worked that out in the green room ahead of time… The premise of his statement – that Israel should insist on a double standard – is absolutely pathetic.

If anything could turn a thinking audience Euroskeptic, that little lecture from Jesper Vahr should seal the deal.

Thanks to Caroline Glick for apt response.

Ah, one more example of the soft bigotry of low expectations . . . for the muslim savages.

So if Israel is “one of us,” to these clowns Muslims are “one of them?”

Amazing how liberals are such racists, isn’t it?

They’re holding Israel to a higher standard than themselves, not an equal standard.

Exactly. If they really held themselves to the same standard to which they hold Israel, that would be reasonable. But they don’t hold themselves to anything like such a standard.

“They holding Israel to a higher standard …”, because

” “this is because you are one of us” ”
but we don’t permit YOU rights that we humans have to defend orselves and to have our point of view taken into account when addressing our actions.