Do you make the IRS feel ‘icky’?

Do you make the IRS feel ‘icky’? 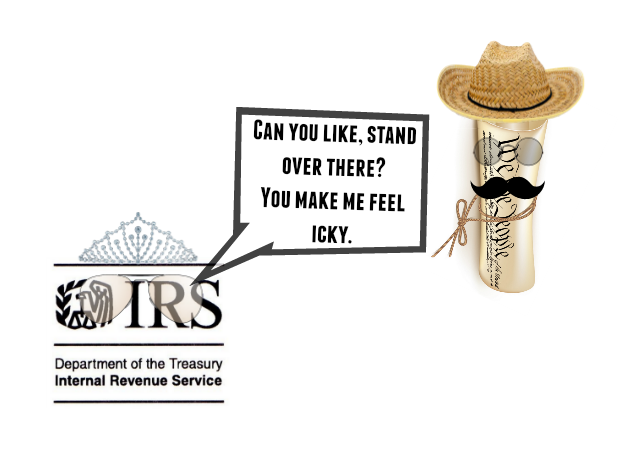 Yesterday, the House Committee on Oversight and Government Reform released a report on the IRS targeting of conservative organizations. Republican Representative Darrell Issa (CA-49), the outgoing Committee Chair, released the report that reviewed over 1.3 million pages of documents and 52 transcribed interviews.

The report is the most extensive to date.

Conservative organizations were not just singled out because of their political beliefs—they were targeted by IRS officials and employees who expressed a general loathing toward them even while begrudgingly admitting that those organizations were in compliance with the only thing the IRS should care about: the federal tax code. Documents and interviews show IRS officials failed to limit their professional judgments to enforcing the tax code and instead inserted their own beliefs and judgments into federal matters to influence outcomes and decisions. One IRS agent wrote about an organization applying for 501(c)(4) status that donated to other organizations that engaged in political activity, “I’m not sure we can deny them because, technically, I don’t know that I can deny them simply for donating to another 501(c)(4).” Another agent responded, “This sounds like a bad org . . . This org gives me an icky feeling.”

The most concerning piece of information gleaned from the report is that targeting individuals or groups for ideological reasons appears to be a widely accepted tactic among IRS employees, not simply a directive from above.

Based on some of the emails included in the report, it seems as though individuals were actively looking for reasons to deny conservative applications.

One employee wrote in an email, “It appears that the org is funneling money to other orgs for political purposes. However, I’m not sure we can deny them because, technically, I don’t know that I can deny them simply for donating to another 501(c)(4). . . . Any thoughts or feedback would be greatly appreciated.”

As noted above, yet another IRS employee felt “icky” (sad face and all) because of a “bad org”: “I think there may be a number of ways to deny them. Let me talk to Sharon [Light] tomorrow about it and get some ideas from her as well. . . . This sounds like a bad org. :/ . . . This org gives me an icky feeling.”

The Oversight Committee has promised this is not a final report; but it is an unsettling picture of the IRS’s attitude, as a whole, towards conservative and Tea Party organizations.

The IRS feels that Americans who support the Constitution [the same one that they supposedly swore the Oath to] are “Icky” and merit illegal attacks by the government.

Many Americans who support the Constitution, and who swore the same Oath, remember the clause about defending the Constitution against “all enemies, foreign or domestic”. I believe that the IRS counts as a domestic organization. And there is precedent for counting membership in a organization that attacks the US as reason for personal culpability.

IF they are not restricted by the rule of law ….

Bless her icky-struck little heart. Us ole Tea Partyers just will not go away… this after CNN told her that that Tea Baggy-ish movement was supposed to have died out, or something. ohhh boo hoo hoo.

Welcome to America. Americans not welcome.

“Do you make the IRS feel icky?” Gosh, I sure hope so.

At the rate the U.S. is going pretty soon there will be no manufacturing or real domestic product. (The latest GDP calculation now contains non-material, non-value added things like entertainment.)

What we are producing is a litigation industry. So, the IRS may be put out of business with no revenue coming in unless, of course you go see “Frost”. or “The Interview” (our culture’s latest products).

Imagine a post card-sized return that says you owe 10% of your last year’s real income and ONLY if the government balanced last year’s budget to within a penny.

My proposal for balancing the budget in two years: Pass a law or amendment which mandates that at the end of every fiscal year, any amount that the government spent beyond what it takes in (i.e. the deficit) is divided by the number of citizens in the country, and all of them are sent a bill for that amount to make up the shortfall. (If this had been in effect last year, every man woman and child would have each been billed a bit over $2000.)

After the bills arrived, millions would quickly converge on DC with torches and pitchforks (and worse).

The following year, the new congress folks heading to Capitol Hill to replace the casualties would be incredibly mindful of responsible budgeting, and ensure that the FedGov didn’t over-spend ever again.

The problem with law in general is that too much of it, these days, depends on terms whose meaning is more literary than capable of objective definition or even a good bayesian approach to objective definition. Sure, this is why we have lawyers, but at that point the process becomes the enemy and too much power has been transferred to unaccountable bureaucrats. Volokh muses on this, indirectly, at this post on racism (so-called). http://www.washingtonpost.com/news/volokh-conspiracy/wp/2014/12/18/lets-have-a-national-conversation-about-race-so-we-can-figure-out-whom-to-fire/.

I’ve contended for years that we erred greatly by watering down the void-for-vagueness doctrine. It needs to be revived and infused with teeth.

“I’ve contended for years that we erred greatly by watering down the void-for-vagueness doctrine. It needs to be revived and infused with teeth.”

Okay, here I go again, sticking my oar into legal waters without benefit of being a Doctor of Jurisprudence. As I have always understood it, the Void for Vagueness doctrine is based on the clear language and intent of both the Fifth and Fourteenth Amendments to the Constitution. If that is the case it needs simply to be used rather than revived, as its basis has not changed.

The entire idea is to prevent the need, the opportunity, for courts to decide just what any given law is supposed to cover, how it is to be enforced, and how violations are to be punished. We have surely not outgrown the need for this concept, as can be seen by the plethora of laws with meanings so vague and convoluted that have to be guessed at every time they are presumably violated.

As the other Professor says, our country is in the very best of hands.