Is the CIA lying? 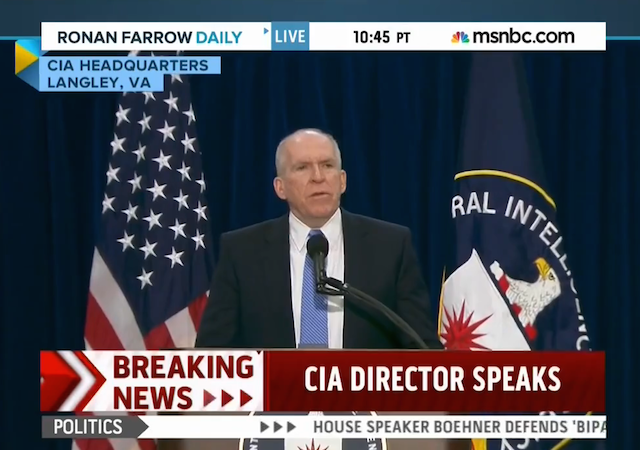 CIA Director John Brennan held a press conference today at CIA headquarters where he took questions about the recently released “torture report,” the enhanced interrogation techniques (EITs) used in the wake of the 9/11 attacks, and the future of those agents who used the techniques on prisoners.

“The cause and effect relationship between EITs and useful information provided by the detainee is, in my view, unknowable,” Brennan said today in remarks at the Central Intelligence Agency’s Langley, Virginia, headquarters outside Washington.

It is Brennan’s first public appearance since the release this week of a report critical of the agency’s interrogation of terrorism suspects a decade ago. The report, by Senate Democrats on the intelligence committee, concluded the CIA misled Congress about overseas interrogations and that they were more brutal and less effective than the CIA claimed.

“We feared more blows from an enemy we couldn’t see and an evil we could not fathom,” Brennan said, referring to the impetus for developing a detention and interrogation program for captured terrorists after the Sept. 11, 2001 terror attacks.

“The program was uncharted territory for the CIA and we were not prepared,” Brennan said. “We failed to live up to the standards we set for ourselves.”

The Senate report cost $40 million and took six years to complete and is the most comprehensive assessment of the CIA’s “black site” detention facilities and the “enhanced interrogation techniques” used on at least 119 terrorism suspects after the terrorist attacks.

Although the White House reportedly has said that Brennan has the full confidence of the President, the tone of the press conference was somber, and the press took full advantage of the outrage and confusion over the report’s findings to press Brennan on how the CIA plans on holding those responsible accountable, and whether or not those agents who did use EITs will be protected by the Agency during future committee probes.

You can watch the full video of the press conference here:

If we get a dirty bomb near a port (or subway chemical bombs, etc.), and real chaos ensues, even idealistic Democrats will start demanding “screw the softy waterboarding approach, get out the pliers and hammers”. Especially if their pretty stock portfolios explode.

Aggressive interrogation of terrorists? Or collateral damage killing and maiming of the innocent, yielding no intel? Which is the higher moral ground, and more effective?

People seem OK with dead innocents as long as they don’t hear the details. What about the innocent kids with shrapnel puncturing their organs, that manage to crawl off but find no medical treatment? Is that better than making the terrorists suffer briefly, with medical attention on hand?

Lawless and dishonest Obama seeks higher ground, by by throwing dirt on everyone else and climbing on top.

Your scenario is wrong on multiple levels. First, torture didn’t save American lives, it produced at least thousands killed by being the key recruiting tool for anti-state terrorists such as al-Qaeda. This has been verified and stated by US interrogators, FBI agents, and Alberto J. Mora, Navy General Counsel who said to the Senate 6/17/08:

“First, there are serving U.S. flag-rank officers who maintain that the first and second identifiable causes of U.S. combat deaths in Iraq – as judged by their effectiveness in recruiting insurgent fighters into combat – are, respectively the symbols of Abu Ghraib and Guantanamo. And there are other senior officers who are convinced that the proximate cause of Abu Ghraib was the legal advice authorizing abusive treatment of detainees that issued from the Department of Justice’s Office of Legal Counsel in 2002.”

Second, torture’s purpose isn’t intell. Its purpose is terror, inflicted on individuals and designed to terrorize them and whole populations that they are a part of. That is why so very many innocents have been tortured because it works better that way since terrorism’s specific character is to be indiscriminate. That is why anti-state terrorism (e.g., al-Qaeda and ISIL) and state terrorism (the US gov’t’s policy of torture & illegal and unjust invasions) are mirrors of each other.

Third, who was it that was caught sleeping at the controls when 9/11 happened? Who was it that had been warned repeatedly of pending attacks and refused to do anything about it? These are the people – Bush et al – who claimed to protect the nation better than anyone yet they have been shown to be the very worst protectors imaginable.

Fourth, Obama’s really on your side. He has been trying to conceal these facts about torture from the start and only had to release it because of tremendous pressure. Obama is your ally. He kills with drones, engages in rendition, and tortures prisoners with, among other things, forced feedings.

In the absence of consensus, why not apply the legal and moral precedent of pro-choice to foreign policy? Surely, Obama et al would support enhanced interrogation in lieu of enhanced population control (i.e. premeditated abortion), when the subject is an enemy combatant and not a wholly innocent human life.

That said, I wonder what will have greater repercussions, enhanced interrogation or assassination of foreign leaders, undeclared regime changes, etc. It seems that Obama et al are up to their old tricks a la financial crisis.

“We sleep safely at night because rough men stand ready to visit violence on those who would harm us.”

often attributed to Winston Churchill, a man who combines cigars and cigarettes in his name (learned that here)

As well as church.

…and triumph and low promontories.

Interesting that the Collective seeks in every way possible to take away the means of self-defense or defense of others on both the national and individual scales, and shame and denigrate those who use them.

The left has decided to unilaterally disarm us from being able to deal with an enemy who doesn’t hold the same values and beheads at will innocents using a video camera to record the awful event so that it will horrify the public.

Our constitution directs that we should not engage in cruel and unusual punishment.

But in war, with an enemy that believes that cruel and unusual punishment is authorized, we shouldn’t approach our fight with them with any less vigor than they prosecute their acts of war upon us.

War means bloodshed, torture, and heinous acts will happen until the losing side surrenders.

Having those acts of war happen upon the enemy first while avoiding those acts happening upon your own side is called winning the war.

We ought not to follow strickly the Geneva convention if the enemy we face doesn’t fight by its rules.