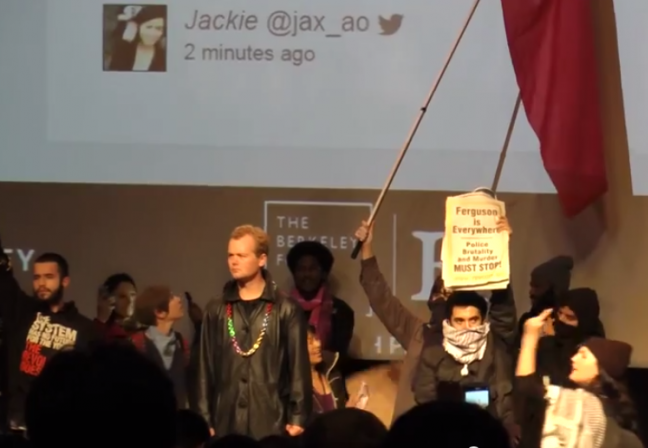 Does it really matter who it was?

Could have been anyone.

It was Peter Thiel, the founder of PayPal. And no, it wasn’t because of the high fees.

Billionaire investor and PayPal cofounder Peter Thiel was forced offstage at the University of California, Berkeley, on Wednesday after Ferguson and Eric Garner demonstrators barged into the room and took over.

Protesters banged on doors of the lecture hall where Thiel was speaking, causing the audience to grow more and more uneasy as the noise continued to get louder. Then, a male student inside the lecture hall stood up, yelled “F*** you” at Thiel and left.

But after about 20 minutes, protesters came banging on the doors, interrupting the speech multiple times. A sense of panic seemed to be overtaking the surprised audience, but Thiel went on and continued through the Q&A.

At about 7:30 p.m. PT, the sound of protests and door banging got louder. The entire crowd at Wheeler Hall turned eerily silent — until one male student suddenly rose up and yelled at Thiel.

“F–k you!” the guy shouted as he walked out of the hall.

After a few seconds of silence, Thiel, in his quiet, calm voice, said: “This is really a classic Berkeley event today — this is so cool!”

Although Thiel insisted on going on with the Q&A, the protests got too loud at that point. Moments later, the doors finally gave in and protesters took over the stage.

The protesters held signs of “Ferguson” and “Black lives matter.” Some shouted, “NSA’s got to go!”

The crowd booed the protesters and shouted “Peter Thiel matters!”

Sooner or later, someone’s going to get hurt.

It does matter who it was. Because it gives a little more insight into who these people are and what their true aim is. They would not have done this to a prominent socialist speaker.

I understand the protesters. Thiel not only represents the Paypalarchy, he also represents too much diversity in one person for a university setting.

The Good: He’s an immigrant.
The Bad: He’s white.

The Good: He’s a philanthropist.
The Bad: He’s a capitalist.

The Ugly: He’s a libertarian Republican.

Born to Germans Klaus Thiel, a chemical engineer, and Susanne Thiel, in Frankfurt am Main, West Germany. Thiel moved to the United States with his parents when he was one year old, and was raised in Foster City, California. Thiel was a US-rated Chess Master and one of the highest ranked under-21 players in the country …

Thiel studied 20th-century philosophy as an undergraduate at Stanford University. He received his B.A. in Philosophy from Stanford in 1989 and acquired a J.D. from Stanford Law School in 1992 …

Thiel clerked for Judge J.L. Edmondson of the United States Court of Appeals for the 11th Circuit.

In 1996, he founded Thiel Capital Management, a multistrategy fund …

Thiel is a self-described conservative libertarian.

Thiel has supported gay-rights causes such as the American Foundation for Equal Rights and GOProud. In 2010, Thiel held Homocon 2010 for GOProud, an LGBT conservative/libertarian organization, in his New York City apartment. Thiel himself is gay. He invited conservative columnist Ann Coulter, who is a friend of his, to Homocon 2010 as a guest speaker …

Thiel inherited his Christian beliefs from his parents. He grew up as an evangelical, but he describes his beliefs as “somewhat heterodox,” complicated by his cultural liberalism. “I believe Christianity is true,” he said. “I don’t sort of feel a compelling need to convince other people of that.”

I full expect some who support “the cause” to rationalize any injuries, or suffering like from the impeding the occupant in an ambulance, or any collateral human damage. Any of that will be compared to the “suffering” and “damage” to lives at the root of “the cause.” The small number of black citizens killed by police somehow justifies the protesters causing human suffering of their own.

I recall one person behind the current disturbances saying something like “People have to die in a revolution,” the implication being that some of the non-guilty will inevitably have to be sacrificed.

It’s like Bill Ayers & Co. planning to set off a bomb in an alleyway behind a police station. Larry Grathwohl pointed out that it would probably kill people inside a nearby cafe where most of the customers were black–and weren’t the Weathermen fighting for justice against a racist society? Ayers shrugged and said that people have to die in a revolution. (Fortunately, Grathwohl was able to foil that particular plot.)

… were black — and weren’t … (Why do double hyphens get turned into a single hyphen here?)

Well, I’m loving this, because this is the Revolution, guys.

The presence of the “protesters” is not the story: the response by Thiel and the crowd is what matters.

Here’s another case in point: the lame media is still trying to declare the TEA Parties dead, after a TEA Party fueled takeover of Congress by the Republican Party.

The article itself is not as important as what the writer is trying to do.

It has been plain from the get-go that there was a disturbing mixture of decent people and hijackers attempting to bring about very different results in Ferguson. The revolutionary aspect of this incident is that people far away can distinguish between the two.

For example, Mike Brown’s father has asked that police departments make placement of cameras on police a priority, and Mike Brown’s self-described step-father has shouted “Burn that bitch down!” We know this because people with cameras of varying shades of skin tones have recorded, and published all of it.

In addition, independent-minded black folk have been filming and publishing news reports. It seems that they hunger and thirst for justice based on the evidence, and they are reaching out to *gasp* conservatives because they, too, believe in the same principles that conservatives do.

Moreover, in this last interim election, the hold the Democratic Party has had on the black vote broke. The initial set of numbers was small, but it is a bellwether.

Methinks Lightman and yourself have some romantic view of revolution. I hope it doesn’t take your own loss of property to awaken you to the fact that Obama is 100% behind the unrest, and will put cuffs on cops if we let him. Then only those who can afford either to move away, or to provide their own security will be safe from the mobs.

I think you need to re-read what Valerie wrote.

Sorry Radegunda, but I reread it several times before replying. Valerie has a mixture of things, but she and her linked author are romanticizing thuggery. For example, from V:

It has been plain from the get-go that there was a disturbing mixture of decent people and hijackers attempting to bring about very different results in Ferguson.

Valerie tries to dismiss the content of Lightman, “The article itself is not as important as what the writer is trying to do,” but all that does is let symbolism trump substance. These protests are elevating symbolism while dismissing substance.

So-called “peaceful” protesters who fail to see that they are aiding and abetting violence should wake up, or they should suffer the same consequences as the thugs. Sympathy for these protesters is unwarranted and is becoming dangerous.

Bunch of damn Nazis. Head Nazis Obama and Holder keep excusing them, fanning the flames. This is coming down to an us-or-them moment. We’ll see which states choose law and order, and which choose chaos.

The seeds have been deliberately planted for this, and now the weeds are taking root.

We were at a show last night in Chicago, a performance of “It’s a Wonderful Life” performed as a radio play. The stage was very intimate, right at floor level, with old-fashioned radio microphones stage front for the performers. Patrons were requested to enter and leave the theater by a back walkway so as not to interrupt the performance or “jostle the microphones.” There was no intermission. At some point, a man entered the theater and walked right on to the stage, stood in front of a microphone and began to speak. He was not part of the show, the audience or the theater staff. He was black, well-dressed but possibly disturbed, and he asked the audience if we had ever “considered the subject of poverty, of black poverty.” A woman in the cast tried, in a “compassionate” way (quiet, gentle, “it’s okay”), to get him to leave, but two men in the audience stood up and hauled him out. Before this incident, several people had all left the show at the same time, so I think it may have been a set up, I don’t know. There were children in the audience who were very confused. The show went on, but the room was tense for quite some time.

At the time, I thought that this was the “chickens coming home to roost” scenario. However, I was awakened at night by the thought that the guy could have punctuated his remarks with gunfire had he been armed. No one could have stopped him…he was two feet from the front row.

I fear for my country.

Thiel should have brought his own security. The brats storming the stage should have lost their teeth. It would be an eduction to other brats.

There is an insurrection underway, and it is being engineered by Barack Hussein Obama and his handlers in the White House. They didn’t buy all those billions of bullets a militarize the Department of Education, etc., for nothing.

What the fu*k is John Boehner still doing in office?

A protest demonstration at UC-Berkely, what a shock!

“But Henry, they’re backed by socialists and commies!”

Based on the videos I’d estimate there were around 200 jerks. Out of a campus with over 36,000 students.

It’s also encouraging that the audience booed them and gave it back to them.

The problem is the 200 ‘jerks’ are working for our government. All these ‘protests’ and street thuggery are now being orchestrated by our government. And this is only the beginning. We have two years to go.

In Graves’ new movie, maybe it’ll be Boehner who gets cracked over the head.

I expect these agitators to break into a rendition of the “Internationale” at any moment.

Do I feel like the Russian bourgeoisie did in 1917?

Probably more like average German citizens felt like in the late 1920s, as Hitler’s Brownshirts ran rampant in the streets.

Now the Brownshirts are Obama’s. And the GOP and that raging a-hole Boehner is helping to fund them.

I have to admire the very calm professionalism of the security. If I was the guard facing that screaming mob and the press of bodies, I would have been very scared and probably started pepper spraying everyone. The fact that no one was hurt says a lot about the way they handled themselves in a very tense situation. I’m very impressed.

It would have been fun to punch a hippie.

Soon someone will realize that if you stand up to these bullies and start breaking some heads…well, what are they going to do? Call the cops?