Baltimore City Police Commissioner: Will There Be Marches when “Officers are Shot, Too?”

Baltimore City Police Commissioner: Will There Be Marches when “Officers are Shot, Too?”

Anthony Batts asks an important question and outrages all the right people. 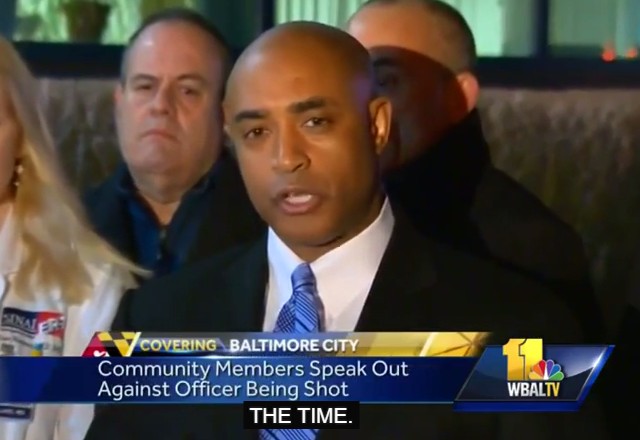 A Baltimore City police officer was shot and seriously wounded at a traffic stop Sunday night. At a press conference outside the hospital as the officer was being treated, Baltimore City Police Commissioner Anthony Batts said, “I’m not caught on the irony of the timing of the situation. We’ve had marches nationwide over the fact that we’ve lost lives in police custody. I wonder if we’re going to have the same marches as officers are shot, too.” (The remarks are at about 1:25 in the video embedded below.)

According to one news report the Baltimore Police Department has gone to great pains to point out that during the whole episode the police on the scene did not fire their weapons at all.

A man in the back seat refused to comply with an order to show his hands, police said.

“One officer advised him that if he didn’t comply he would be tased. At some point, there was the discharging of the firearm and the firing of a Taser, exactly which event happened first is under investigation,” Baltimore City police Maj. Stanley Branford said.

Three shots were reportedly fired and one struck the officer in the abdomen, below his bulletproof vest, injuring him. His partner took him to the hospital. (According to news reports, officers in Baltimore are authorized to take injured colleagues to the hospital and not wait for ambulances. The nearest hospital is about three miles from the scene of the shooting.)

“One of our officers was attacked was for no reason was attacked viciously by (the gunman),” Baltimore police Deputy Cmdr. Jerry Rodriguez said.

City police said a few people were taken into custody, but only one man, 19-year-old Donte Jones, was charged in the shooting. A city police commander said Jones is a violent repeat offender. He faces attempted murder charges in connection with Sunday’s shooting, police said.

“This is a situation where had the individuals in the car complied with the officers’ directions, at best, maybe a citation,” Rodriguez said.

The suspicious activity in question was reported marijuana use.

Jones, the suspect in the shooting, was out on $150,000 bail for drug and weapons charges. Before the shooting he had a court date on the earlier charges scheduled for yesterday.

Needless to say, Batts’ comments created something of an uproar, but he’s right. Where is the support for police officers trying to do their job? The question is even more apt in the city that was ranked the country’s 7th most violent in 2013.

As Prof Jacobson pointed out, sometimes it’s the police who end up on the wrong end of a gun in struggles with suspects. And unlike the case in Baltimore, they don’t always survive.

There will only be marches if the cops who are shot are black, and the shooters are white.

In this case, they didn’t show pictures of the people involved, but given that the shooter’s name is Donte Jones and he’s described as a violent repeat offender, it’s probably a safe bet that he doesn’t qualify as white (or even white hispanic), and so outrage against him would be pointless.

Another violent black guy shooting somebody is not newsworthy, and won’t score any professional grievance-mongers some face time on t.v. or more taxpayer money, so why bother?

I wonder if Obama, Holder, and Co. will show any support for the officer.

If they follow form, they’ll throw off a sentence or two, followed immediately by several paragraphs of race-baiting and post-modern BS.

On another day, I would not point out that the Police Commissioner, Anthony Batts, is black.

My best to the injured officer and his family.

Oh, and good on Commissioner Batts. All Baltimore would need is for the cops to go on strike.

I find it hard to believe that any office would not be offended by campaigns demonizing them based mostly on painting a false picture of cases involving actual criminals.

Beyond supporting police, how about meeting organized campaigns based on intimidation, threats against them and their families, friends, coworkers, destroying their careers head on?

Hasn’t this gone on too long already? When are we going to join together and give black racists the same attitude adjustment which was dished out to the KKK? Black scheming and racism is just as ugly as any other flavor.

There will be no marches because of work and in some cases, a family to support. Who has time for that? What we can do is contact our elected officials and go to bat for our officers and support causes that support our officers.

We can make it a point to show up for our local police department’s memorial service and to say thank you when we see an officer out and about.

Batts and most everyone else knows that the Ferguson/Brown protests are almost entirely astro-turfed, co-opted by activist groups to exploit for their own agenda, just as genuine Ferguson locals quickly turned early anger into an excuse to loot and steal – they co-opted their own protest by greed. Nationwide there is broad support for law enforcement, way in the majority. It is only in urban shit holes (and rural meth labs) where there is any sizable dislike of police, and most of that is because so many there are criminals. Of course they don’t cooperate with police. Moreover, they intimidate otherwise honest neighbors into refusing to talk to police.

I’d like people to start naming the problem – these aren’t grassroots, neighborhood uprisings against police, these are organized, manufactured claims of capital s, capital o, Social Outrage, massaged by a cohort of radical leftist racists and a fawning leftist media. None of it, or very little, is real, however.

It’s like the media/political/social complex has started viewing its own kabuki theater as a documentary.

…the Ferguson/Brown protests are almost entirely astro-turfed, co-opted by activist groups to exploit for their own agenda

Occupy has become an on-call rent-a-mob.

I bet Lisa Fithian has earned herself some HIGH frequent flyer miles the last few months.

It would be interesting to know how many cities she’s visited, and which one she’s in now.

Law abiding citizens should be very afraid of what is coming! My advice is move to the country and get prepared, quickly!

Needless to say, Batts’ comments created something of an uproar, but he’s right. Where is the support for police officers trying to do their job?

And his comments should have created an uproar.

While there is no excuse for what happened in this case and I hope the officer gets well, the fact of the matter is that Batts’ department is a cesspool and instead of cleaning it out, he and the police have resisted every attempt to make the department better.

How bad is it? In 2012 the FBI conducted a sting netting 60 officers for illegal conduct. Some of the officers are still waiting trial, some were convicted and others allowed to resign. It was at the time the largest police corruption investigation taken on by the FBI.

At the same time, from 2011 to 2013 the City has paid out over $5.2 million dollars to settle lawsuits against police for misconduct and brutality. Of the cases in question, none of the citizens were convicted of anything because the charges were all dropped.

One particularly troubling case from 2013 is where a suspect in a drug deal gone bad was caught in a house that happened to be the home of the girlfriend of a married officer. After the man was arrested and taken away, the off-duty officer requested the man be returned to the house. The sergeant transporting the man complied. The man was taken into the home in handcuffs where he was attacked and beaten by the off duty officer while the sergeant stood by and watched.

The officers then lied to investigators.

A detective who testified at the trial of the off-duty officer returned to his car to find a dead rat and a threatening note. Apparently his “ratting out” a fellow officer was seen as more egregious than the actual beating of a handcuffed man.

(At sentencing, the off duty cop said that he wouldn’t do anything differently today than he did the day he assaulted the handcuffed man.)

Batts’ department has serious issues. The public has lost confidence in them and the police are not doing much to rectify the situation other than hiding behind the “blue wall.”

So while the Feds are investigating the department, a special prosecutor from the state is pursuing trials against BCPD officers, the State of Maryland investigates corruption and misconduct in the department, Batts and the Police Union actively pushing back against any changes to the police and civilian review board which hears complaints of misconduct, and the Police resisting any attempt to use dash cams and body cams for officers, Batts seems to be trying to distract from that by saying “look what we go through.”

The mistrust of the Baltimore City Police Department is deep and crosses all ethnic, racial and gender lines. Batts, the Police Department and the citizens of Baltimore would be better served by addressing the corruption within the department rather than saying “why aren’t people protesting for us?”

The guy who shot the officer in this case should go away for a long time. I have no sympathy for him and hope and pray the officer is safe and recovers fully.

Good for Tony Batts for saying what needed to be said.

“I wonder if we’re going to have the same marches as officers are shot, too”

I guess today, with two dead NYPD, we have the answer.