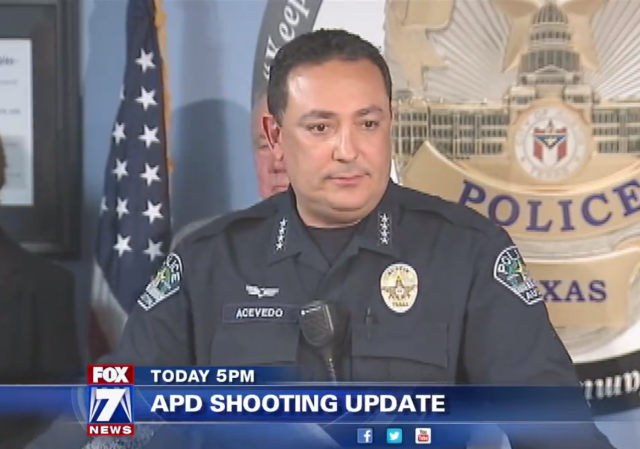 The only fatality was the shooter himself, when a mounted Austin police officer dropped McQuilliam from 312 feet with a single, strong handed, shot.

McQulliam unleashed approximately 100 rounds in an attempt to shoot up a federal courthouse and Mexican Consulate. He had the words “Let Me Die” written on his chest in marker.

He said investigators found a map that included 34 locations marked as targets in McQuilliams’ possessions.

The majority of the locations were either government buildings, including the ones that he attacked, or financial institutions, Acevedo said. The map included two churches.

Investigators also found a book, “Vigilantes Of Christendom,” the police chief said. Inside the book was a handwritten note that discussed McQuilliams’ rank as a “priest in the fight against anti-God” people, Acevedo said.

According to Christopher Combs, special agent in charge of the FBI’s San Antonio division, McQuilliams had mentioned to some people that he was upset because he couldn’t find a job and because, in his view, immigrants were able to get more services than he was.

“Folks, let me tell you what keeps me up at night, it’s these guys. It’s these homegrown extremists that are lone wolves, that are mad at the world, that are angry. And that’s why it’s important for us as Americans to know our neighbors, know our families. Tell somebody. If you know somebody that’s acting with a lot of hatred towards a particular group especially if you know somebody who’s a gun enthusiast or they’re armed with this type of fire arms and they’re showing any type of propensity for hatred, doesn’t mean that we’re going to go and take them to jail, but we might want to vet these people. He may well be alive today had we had the opportunity to do that.”

You can watch his remarks here:

Why not point out that bigotry and anti-religious jerks are the real problem! That’s right rat out your fellow bigots! Oh yeah, it’s Austin.

Yeah, I know some typical Lefty haters over in Awwwww-stin [sic] who are foaming at the mouth over Rick Perry, fracking, regular old coffee and the implosion of the 0bama presidency. Do I report them in alphabetical order, by height or by aberrant behavior type. Just lemme know, Chiefy!

Most of us roll our eyes at the weirdos to the South of us.

Keep Austin Weird (and keep it there please!)

“Keep Austin Weird” was relevant back about 1970. Now, it’s just a bumper sticker on a Volvo or BMW parked at the Banana Republic down on SoCo where the real hippies used to sell home-made tie-dyed t-shirts before Austin became so stuck on itself and adopted Cali real estate prices.

Austin doesn’t just have a stick up its ass, that stick is sideways, too.

Dallas also comes to mind, and for decades.

It’s been my experience that nearly all of the Chiefs of Police that are anti-gun are political appointees that have little or no actual experience as street cops. The ones that come up through the ranks are usually supportive of citizen carry; a large number even encourage it.

I wonder how much “street-cred” this guy has.

I’ve heard people say that before, but he started as a field patrol officer in east LA.

Yeah, this jackass Assevado was imported from Kalifornia. No wonder he talks like a fascist.

The media was foaming at the mouth when news broke about this guy shooting up those government buildings. Assevado could barely contain himself spouting off about “anti government” types.

When the background on the guy came to light, they all shut up pretty fast though, didn’t they?

The guy was apparently a fixture at “drum circles” down by Barton Springs, and was a regular volunteer at Renaissance Festivals, not to mention having a fairly long rap sheet. So basically another progressive loser.

Then we have, in stark contrast, Detroit Police Chief James Craig, who also hailed from L.A., but via Maine. He left L.A. as the same kind of knucklehead as this yo-yo, but “came to Jesus” after being sheep-dipped in the normal world. Now, this black urban police chief advocates residents to acquire and become skilled with firearms, because he knows that the cops can’t be everybody’s individual guardian angel.

It starts with requests to rat out your neighbors. Later it becomes illegal not to have ratted out neighbors. So, tell me vot yoo know, comrade.

To whom do I report Larry McQuilliam of Austin, TX, who has access to lots of guns and seems to be harboring a lot of hatred towards a particular group of people who all happen to own guns?

Nuts. I meant to have the name “Sheriff Art Acevedo” in my comment. I totally ruined my own snide remark.

The ten worst anti-knife cities stand out for their outright persecution of honest knife owners and extraordinarily restrictive anti-knife ordinances, far more severe than even the state laws in those areas. All too often this results in unwary citizens being subject to arrest and prosecution, and loss of their knives, for having a knife that is perfectly legal elsewhere in the state.

4. San Antonio, TX (all locking-blade pocketknives knives are illegal to carry except on the job)

9. Corpus Christi, TX (illegal to carry any fixed blade knife or a folder with a blade longer than 3-inches except when actually in use on the job)

Texas cities can be as loopy as any.

Cities are screwed up everywhere. Everywhere, I tell you.

Me thinks McQuilliams was a liberal. This story has been kept far too quiet since the incident happened. If he had an “R” on his voter registration we would have been hearing this story nonstop since it happened.

You correct. He was a regular at “drum circles” down by Barton Springs… basically a bunch of smelly, unemployed, dope smoking hippies bouncing around like weirdos beating on stuff. He was also a regular volunteer at various Renaissance Festivals… essentially a progressive hippie stuck in the wrong decade.

I would like to offer policemen the benefit of the doubt. But Acevedo’s position causes me to pause and reconsider. We need to vet policemen or perhaps just Acevedo.

Anyway, one of the best armed populaces in the world, and other than the state-sponsored premeditated abortion of around 2 million Americans in planned parenthood rituals, the murder rate is, by Acevedo’s standard, surprising low.

Acevedo is a displaced California Police Chief. You need to take that into account when listing to his nonsense.

Great… “gun enthusiasts” are in need of vetting. What one owns in firearms infers a predilection to crime? The connection with hatred? The best citizen must now be the unarmed, helpless type willing to sacrifice their lives to be a victim rather than the victor. Right now… I would wager none of us “needs” The Bill of Rights. Why not argue then to abolish them all? Such is the mindset of the Left… Forget “checks and balances”… be a good citizen and submit. Be a good sheeple and let the “good and just” sheepdog protect you. For being in law enforcement, he doesn’t understand human nature and the shortcomings of his beloved system.

Who gets to vet dumb-ass Chief’s of Police who go spouting off their stupid mouths about ridiculous ideas?

Acevedo has been anti-gun long before he got to Austin. Remember, Austin tried to ban handguns in 1976 which caused the state of Texas to pass a preemption law that precludes ANY anti-gun law not passed by the state. The city and county have passed “policy” that makes gun shows too expensive. Hopefully that will be addressed in the Legislature which meets next month for 6 months.

Acevedo’s only been in Austin since 2007, so he had nothing to do with anti-gun Austin in the ’79’s. But, yeah, he was anti-gun even back in California.

Just what does he mean by “vet”?
Seems to me every legal gun owner was vetted when the purchase was made.

I’m guessing you need to pass his ideological purity test which probably includes a promise to preserve and protect the government.

I cldnt let his comments pass unchallenged and actually exchanged emails with the good Chief..he actually started quoting the bible to me as justification for his comments and actions..smh

Austin has been described as the place where Mexico meets Moscow and disappoints both.

Doesn’t that describe most everybody in the ghetto?

The real story here is the Sargant who dropped the Bad Guy with a single, one-handed shot from his service pistol at a range of 312 feet! A 104 yard shot with a handgun is damned good with the Weaver Stance, but one handed? That’s marksmanship!!

We have a history of shootin’ the eyelashes off a rattlesnake at a hundred yards in a sandstorm, one-handed, while rolling a cigarette with the other. Lookin’ into the sunset. With tarantulas climbin’ up our pants. And hungover.

JackRussellTerrierist in reply to TrooperJohnSmith. | December 6, 2014 at 1:02 am

And did it one handed, MOUNTED, and holding the reigns of both his own horse but his partner’s as well….

Can I report Eric Holder who has access to lots of guns (Fast and Furious) and has made public his racial animus towards white policemen and the Second Amendment?

The DoJ has decided to process your report. They will investigate Mr. Holder.

Nah, the DoJ is going to investigate Miss Johnson! LOL

Aw, you’re not Josh Earnest at all!

Go ahead, try to get this monkey song out of your head:

Henry, you dumbass, this is the wrong thread.

I don’t add to the video counter but did read all of the quotes by ace. Appears to me he is only seeking madmen that have guns. Quotes keep using haters as key word with gun enthusiasts. I’m ok with seeking haters for further investigation. Haters with guns are bad news and give us lovers with guns bad image. However, if ace wants to go through gun registrations and harass lovers then he will have bad days ahead of him. All praise Obama!

If he had “Let me die” written on his chest ahead of firing his shots, and avoided wounding or killing anyone despite firing 100 shots, may I suggest that he decided to commit “suicide by cop”?

If his “long rap sheet” included felonies, then he must have obtained his weapon through inappropriate means, which preclude any “vetting”. Does the Chief have any workable solutions for eradicating the black market of anything, including weapons and ammunition? Or is he merely dancing in the blood of his “suicide by cop” victim. Any quotable last words or actions for the demonstrators to reenact?