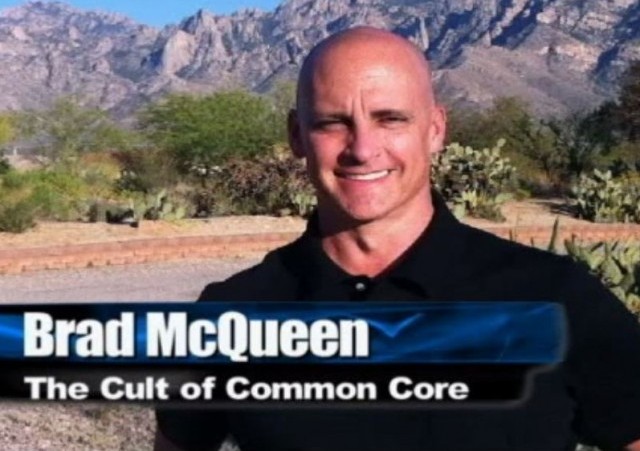 Common Core is generating a lot of concerns around the country, and teacher input without fear of retaliation is essential.

The reality is, however, that teachers critical of Common Core may be intimidated by school district and state officials into silence.

That is what a teacher is alleging in a lawsuit (full Complaint here) filed in Maricopa County Superior Court against the Arizona Superintendent of Education, as described by The Goldwater Institute press release:

Today the Goldwater Institute filed a lawsuit on behalf of Tucson, Ariz. teacher Brad McQueen, who was retaliated against by employees of the Arizona Department of Education for speaking out against the Common Core State Standards.

For years, Mr. McQueen was paid to serve on several committees of teachers who advised the state department of education on issues related to standardized testing. When he spoke out against the Common Core and its accompanying standardized test earlier this year in a newspaper article, he was removed from the committees (even those that had nothing to do with the Common Core), notes were made in his file at the department that could impact future employment opportunities, and he was disparaged in official department emails.

“The First Amendment guarantees that all Americans have the right to speak out on important issues of the day without fear of being persecuted,” said Kurt Altman, a senior attorney at the Goldwater Institute. “When you exercise your rights and find your livelihood and reputation are threatened, especially by the government, that sends a message to everyone around you to keep their mouths shut.”

“The more I learned about the Common Core, the more concerned I became,” said Brad McQueen. “But I had no idea that voicing my opinion on my own time and as a private citizen would cause me to be targeted by the Department. I was shocked.” Mr. McQueen has been a teacher for 11 years and currently teaches fifth grade in Tucson, Arizona.

The key allegations of the Complaint are that there was a chain of retaliation after media appearances by the teacher in which he criticized Common Core and the Partnership for
Assessment of Readiness for College and Careers (“PARCC”) test.:

21. On February 22, 2014, the Arizona Daily Independent published an article written by Plaintiff entitled “SB 1310: Arizonans must reclaim sovereignty over our children’s education.”

22. Plaintiffs article discusses concerns about the new PARCC test and the Common Core learning standards being implemented at that time.

23. On February 26, 2014, Plaintiff participated in a podcast on Tucson’s 104.1 KQTH radio station and spoke to his experience of getting a·’ … sick feeling about this Common Core thing . . . “and topics such as the new Statewide Longitudinal Data System’s propensity ·’ .. . to suction all manner of information about our kids and our teachers out of the classroom and into this Common Core machine.”

The Complaint alleges violation of First Amendment Rights under the U.S. and Arizona Constitutions.

The article referenced is the Complaint is here.

McQueen has written about the alleged retaliation, including that he was called a “f*cktard” for speaking out.

The Arizona Department of Education responded to my inquiry about the lawsuit by saying “The Department does not comment on lawsuits.”

He also is the author of a book, The Cult of Common Core.

Here is a appearance by the plaintiff in which he describes his views:

I am a product of the Tucson Unified School District. I had a good education. But, I could tell right behind me, about two grades, standards were not the same.

It was well known among my friends that our education was pre-Johnson’s war on poverty and that what we were seeing behind us was another world.

I would love it to go back to the way it was. ( for point of reference, I am about the same age as Prof. Jacobson )

Thankfully, there are teachers like Mr. McQueen in the still in the system who are calling out the educators for what they are doing to our youth.

Maybe there is hope.

Common Core is not common sense and I went to teachers college in the early 60’s when they were promoting “New math” which was a disaster that was later scrapped. I must admit I didn’t graduate because when the teachers union told me I couldn’t teach unless I joined I said I’m outta here. I married and we have two great children who are grown and have careers after graduating from college. One of them had to work hard for everything and the other was able to coast through and the one who had to work so hard after a little motivation from me became an outstanding mathematician and when she looked at this debacle just shook her head and laughed then stated She wouldn’t have made the grade using that trash.

Common Core is just another one of those topics that us old white geezers and geezettes get mad about. I have no doubt they keep rolling this crap out just to piss us off.

I think it is significant that the backlash to Common Core has reached Jan Schakowsky’s district. The District 202 Asst. Superintendent for curriculum and instruction, Pete Bavis, wrote an scathing memo and spoke publicly at a board meeting about the testing portion of Common Core. The takeaway line for me was:

“So we’re paying to have a private testing company norm their instrument on the backs of Illinois students. That’s a big problem.”

Evanston Township High School is a huge school, but is unique in that it is in the same town as Northwestern…with quite a number of children of NU faculty attending, and plenty of die-hard progressives as parents. Bavis noted that Common Core testing would take up 15.75 hours, on top of ACT and AP tests taken by hundreds of students. That an administrator is fed up at this stage of the game is significant.

Common Core = Teaching children what to think, instead of how to think.

Common Core is many things, but it is especially a federal takeover of the K-12 education in our country.

The so-called standards are, seemingly by design, dumbed down and incomprehensible, especially when compared to the achievement levels of other nations in math, science, literacy, etc.

I believe it is the socialist utopia wet dream to ensure our nation is taken down to 3rd world status, by both continuing to and ramp up “education” by indoctrination, propaganda, unnecessary and tortuous “problem solving” to simple memorized facts, and overall confusion.

How else can you control the masses? Especially when you’ve stoked the hate, division, and rebelliousness in every balkanized group in the nation.