America is a “Bad Boyfriend,” according to College Humor

America is a “Bad Boyfriend,” according to College Humor

“But I LOVE America.” 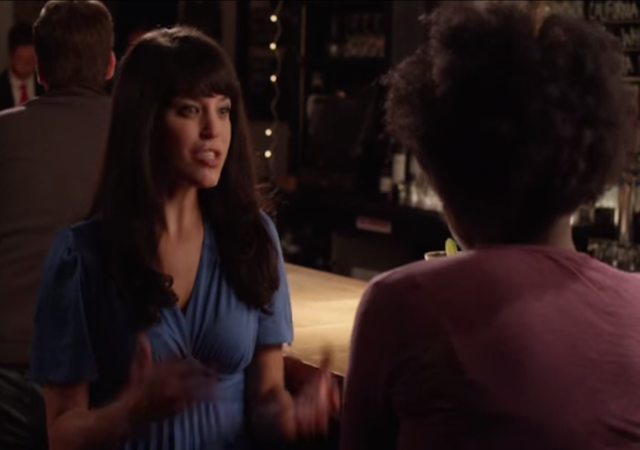 Sometimes, the internet’s lack of self-awareness is so stunning that attention must be paid. This is one of those times.

College Humor’s latest video, “How America is Like a Bad Boyfriend,” affords us one of those rare opportunities to spend three minutes of our lives watching a video, then turn to the person sitting next to us and admit, “so…what, then?”

Just watch the stupid thing so we can discuss it.

Via Truth Revolt (NSFW—plug in the headphones):

As the scene unfolds inside a bar, a woman is confronted about her overbearing boyfriend, America, by her British (yes, British) girlfriend who says, “I think you’re in a bad relationship.”

The woman denies the charge but is assured that she is just making excuses and deserves better. Her British friend continues pointing out all of the bad things America is doing to her — borrowing money, always starting fights, caring more for his rich buddies, etc. Their dialogue goes back and forth:

Girl: America is my country, OK? He’s the smartest…

Girl: He has so many Olympic medals and guns.

BF: I don’t know that that’s a good thing.

The British friend keeps pressing and pressing until finally she says, “You should not have to put up with this.”

I mean, right. I get it. The “America” boyfriend in the video does, indeed, suck at being a decent human being. He monitors his girlfriend’s phone, takes her money to pay for beer, sasses her friend, beats up a Middle Eastern guy at the bar, and accepts beers from unsavory “big business” interests. As a metaphor, it’s hamfisted and obvious and something that I would have written when I was 19 and trying to figure out the essence of clickbait.

I can accept all that. We’re not exactly dealing with the staff writers of the Economist. Put down the bat and step away from the horse.

The problem with this thing isn’t that it’s obvious, but that right now, there are a million young Americans out there who will watch it and nod along because it’s exactly what they’ve been trained to do. (Think I’m overstating? Click over to College Insurrection and pick an article.) This isn’t humor. It’s an insidious messaging tactic used by the left again and again to convince young people that unless they’re willing to portray their home as somehow lessser, they’re not just wrong—they’re brainwashed.

All this coming from a British protagonist who apparently likes her “men” nosy, meddling, and committed to mashing a hand over the mouths of those he disagrees with.

The cherry on top of this mess of a sundae is that after all is said and done, after all the cursing, mooching, and outright assault and battery on innocent Muslim bystanders, the straw that breaks the camel’s back is that “America” tells his girlfriend he won’t pay for her birth control anymore.

But of course, that’s what America means to the young progressive: entitlements, and when those are lacking, rampant derision for the disappointed hopes of those not enlightened enough to know that this messy chunk of land simply isn’t salvageable.

By the end of the video, our British antagonist has convinced her wayward friend that there’s simply nothing to be done but abandon all hope of change and defect to—what, exactly? What’s the alternative, College Humor?

Liberals in America have officially been hanged by their own satire in a mad attempt to abandon ship. They’re not just suggesting the existence of an alternative, utopian reality anymore—they’re depending on its existence to save face.

Can you imagine if they did the same skit on some misogynistic islamic country? Maybe the girl in that video would be fine with the genital mutilation, and the burkas, and the denial of education, but the final straw would be accepting financial aid from the USA 🙂

…or a Jewish relative.

Now there’s a high standard: America, not as bad as Islamic totalitarianism.

I agree with a lot of the sentiments. This is why I’m in favor of a Convention of the States under Article V of the constitution.

The 1st amendment is great, except when everyone is frightened to say what they think, due to the PC police and some federal agencies…. et cetera.

It has been said that democracy is the worst form of government, except all those others that have been tried – Winston Churchill, the man who combines cigarettes and cigars in his very name

Any flaws we have as a nation are minute compared to the cesspool of politicians that (mis)managed the equally fetid federal government. If America is a “bad boyfriend,” then Uncle Sam is the pimp that is corrupting the relationship. These fools think the solution is to run headlong into the arms of their lying pimp ~

That same “GOOD boy-friend” who’s powerful enough to take money from other people for your “free” birth control is the same guy who will insist on telling you who you can talk to, and about what.

These idiots don’t have the snap to understand that.

That College Humor vid sure looks like LOTS (as in “thousands”) of web forum “debates” I’ve witnessed over the last 15 years. Go to any popular “social media” forum, or hell, any mainstream media website, and you’ll see the same sanctimonious, condescending rubbish day after day. Yes, according to the “educated and enlightened” yoots on the Web, “‘Murrica” is truly the worst place on Earth.