It is up to the president to “execute the law, not de facto make law.” 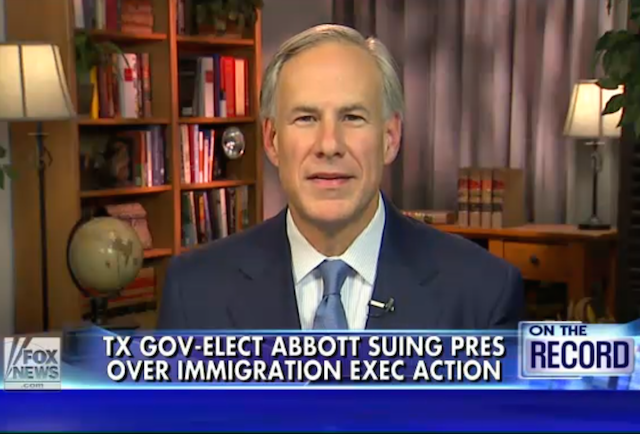 Ask and you shall receive, conservatives—we’re suing the President again!

Texas Governor-Elect Greg Abbott is leading a 17-state coalition in a lawsuit challenging the legality of President Obama’s plan to grant executive amnesty to millions of illegal immigrants currently residing within our borders.

There are three main parts to the lawsuit: first, that Obama’s Executive Action violates the power-limiting “Take Care” Clause of the Constitution; second, that the Administration ignored required rulemaking procedures; and third, that if allowed to go into effect, the order will “exacerbate the humanitarian crisis along the southern border, which will affect increased state investment in law enforcement, health care and education.”

Both Texas Governor Rick Perry and Governor Elect Abbott have experience dealing with both the problems illegal immigration presents to the country, and suing the Executive over federal overreach.

Via the Associated Press:

Abbott said Obama’s actions “directly violate a fundamental promise to the American people” and that it was up to the president to “execute the law, not de facto make law.”

Republican presidents, including Ronald Reagan, have issued past executive orders pertaining to immigration. Abbott said those were in response to actions by Congress — unlike Obama, who Abbott said acted in lieu of congressional approval.

Potential 2016 presidential candidate and current Texas Gov. Rick Perry, who leaves office in January, also spoke out against the executive order earlier Wednesday, saying it could trigger a new flood of people pouring across the Texas-Mexico border and create chaos that could be exploited by drug- and people-smugglers.

Perry said hours before Abbott’s announcement that Obama’s 2012 executive order delaying the deportation of children brought into the U.S. illegally by their parents triggered an unprecedented wave of unaccompanied minors and families, mostly from Central America, crossing into the U.S. this summer.

“In effect, his action placed a neon sign on our border, assuring people that they could ignore the law of the United States,” said Perry, who has deployed up to 1,000 National Guard troops to the border.

In the video below, Abbott makes a great point about the “prosecutorial discretion” argument currently being floated by both the Administration and supporters of the law. The reason that this isn’t simply “prosecutorial discretion” coming down from the White House is that the President isn’t simply making the decision to not prosecute—he’s granting rights and benefits to people who are breaking the law:

It figures that Chris Christie isn’t in this group. Can’t go against his buddy.

That pig still has scabs on his knees and crispy creme glaze on his chin from that debacle.

I’m pleased North Carolina is suing, and surprised Arizona isn’t on the list. California should be, but since it’s governed by left-wing crazies it’s not.

I love Texas. I had the privilege of living there for 5 years before family duties pulled me away. Now if they could only get rid of Austin (make it a suburb of Seattle) and dehumidify the coast…..

Obama, the pied piper to the southern countries. Stealing away the children from their parents.

The keys, as usual, will be standing and ripeness.

I presume the argument will be the EO imposes costs on states without congressional action, and that the harm will be immediate if the courts do not intervene.

The only thing wrong with this lawsuit is that it doesn’t have a coalition of 50 states. Every state in the union should be challenging Obama’s lawlessness. His actions threaten the republic itself.

BTW, I’d like to know where the Obama administration is getting the enormous sums of money that it is spending on all these illegals. There are reports about thousands of new, permanent, federal employees being hired in Arlington to do nothing but process amnesty applications and applications for federal benefits from illegal aliens.

There are also reports about the staggering amounts of money being spent to house, feed, and provide “basic necessities” like new laptops and international-call-capable cell phones to the tens of thousands of “border surge” illegals. (Why do these illegal alien kids need their own computers and international-call-capable cell phones — so they can contact their few remaining family members back home and urge them to get to the U.S. and get their share of all the “free” U.S. taxpayer-funded goodies being handed out?)

Where is all this money coming from? And how is it that the federal government has tens of billions (or more) spare dollars to spend on providing for law-breaking foreigners, yet it doesn’t have enough money to provide for our own military veterans’ basic health care needs? We don’t have enough money to hire doctors for our vets, but we have plenty of money to house illegal aliens in resort hotels and provide them with new laptops and international cell phones? This is beyond insane.