When all else fails, compare your opponent to a Nazi sympathizer 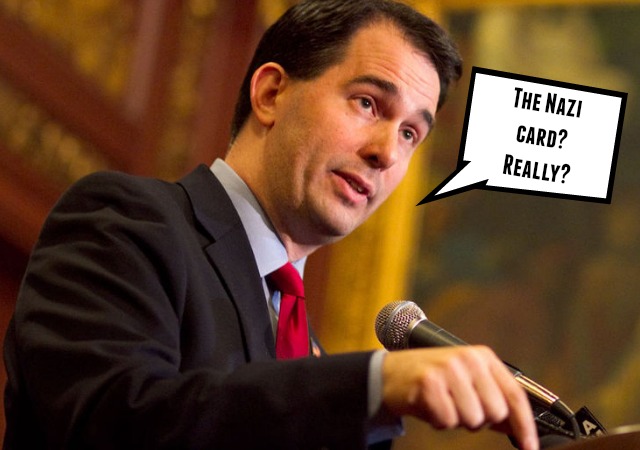 Embattled Wisconsin Governor Scott Walker is steadily outpacing Democratic challenger Mary Burke in all of the latest polls—so of course that means a swastika ad is the only logical option left for Team Burke.

The ad released by the Burke campaign is inside baseball-ish in that if you haven’t been following the intricacies of the race, it’s hard to understand why anything disclosed is significant.

Picked up by and reported by the Washington Post, the ad shows Scott Walker with “donor and campaign worker, Gary Ellerman.” The ad then drops its one and only bomb: “Ellerman posts pictures like this on his Facebook page.” 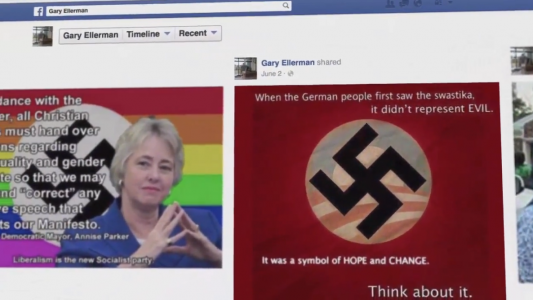 Evidently, Ellerman was fired from Trek (the consumer is supposed to know what Trek is and why it’s important). Mary Burke was also employed by Trek. Ellerman went on to share his account of Burke’s time with the company, an account Burke disputes.

Mary Burke’s thin résumé could only be highlighted with one claim: as an executive of the Trek bicycle firm, she managed their European operations so brilliantly that sales rose exponentially under her watch. Surely such an exemplary manager and problem-solver was just the ticket to serve as Democratic Governor Jim Doyle’s commerce secretary, and is now the person to end the political divisiveness which has characterized Scott Walker’s first four years.

This bubble burst last week when Gary Ellerman, who had worked 21 years for the Trek corporation, serving as vice president in charge of human relations, revealed the devastating truth: Trek’s continental European operations had suffered substantial losses under Burke’s leadership. She had caused critical personnel problems, such that she was stripped of her responsibilities by upper management, forced to return to the U.S. and to apologize to management for her incompetence, and then allowed to take her now-famous snowboarding sabbatical.

Burke’s only possible defense is to discredit this testimony, and Ellerman does have an Achilles’ heel: he himself had subsequently been terminated by Trek (he says over differences in hiring philosophy), and he is a politically active Republican, indeed, chairman of the Jefferson County branch of the party.

Two things prevent this from becoming a case of “he says, she says.”

The first is that Ellerman’s account of the affair has been confirmed in all its essentials by Tom Albers, who was president of Trek at the time and who conducted the review of Burke’s operations at the request of her father, then CEO, which led to her dismissal from the position.

The second is the absolute silence from Trek, currently headed by Burke’s brother, concerning the entire affair.

You can watch the ad here:

Most high profile races these days are marred by slander, slime, and ridiculous attacks, but the Nazi card is always below the belt, even if merely implied. Stephen Green pretty much nails it:

Burke’s Last Refuge: The Nazi Card? The inescapable conclusion is that Mary Burke is a dreadful human being. http://t.co/fUYuEqFyFV

“This is a pathetic attack at the end of Mary Burke’s flailing campaign,” said Walker spokeswoman Alleigh Marre in response to the ad. “As Burke stoops to a new low with her vile attacks, Governor Walker is traveling the state sharing his positive vision for a second term.”

Not surprised. It is a Heil Mary pass just as you would expect.

You had me in stitches. And it’s funny because it’s an apt description.

Puuurrrr lil’ Mary was caught with her nickers around her skanlkes.

Dead-bang lying about her history and qualifications.

Lashing-back with MORE lies is what she had left as a Collectivist. She lives a lie, as do they all.

On the news aggregator Reddit (favored by my kids) reference to Nazis is treated as an automatic loss of the argument. This can make genuine discussion of history a little complicated.

It could be worse. He could have been reformed with a hammer, and planned into an early toilet with a sickle. More human liberties and lives have been lost to a hammer and sickle than a swastika. Today, the hammer and sickle have been replaced by the well known mallet and scalpel, overlaid on a massive, braying Ass.

Burke actually Godwinned the WI governor’s race. I almost want to applaud. Desperate? Obviously. Tragic? Arguably. The chutzpah, visceral repugnance, and self-degradation of the commercial is ovation-worthy, though.

Mary Burke was fired from the family business by her own father. She then spent the next three years surfing, skiing and just generally recovering from “burnout” before being re-employed by Trek in a nebulous position vaguely described as “strategic planning”. I’m not well versed in the ways of the idle rich and don’t begrudge her a dime of her wealth, but the size of her bank accounts can’t be the sole qualification for the governorship she seeks. The anti-Walker unionistas have got to be gagging on their idle rich, 1-percenter candidate.

All they really care about is that she gets in, reverses Walker’s reforms and sets the money train back in motion.

Say what you want about Hitler, he did kill Hitler.