‘I just sign this and then I can vote?’ he asked one poll worker. ‘Yep,’ came the reply. 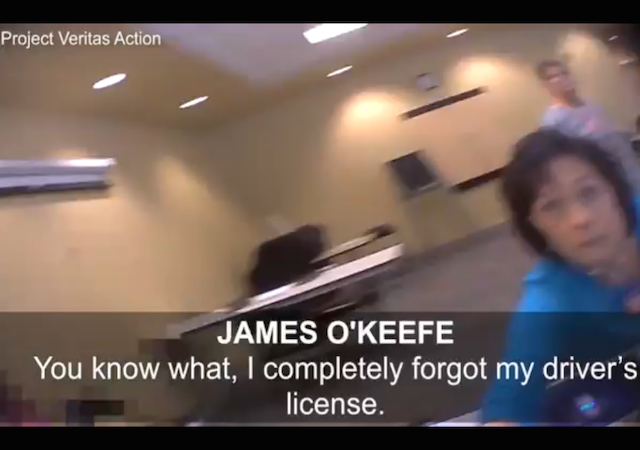 The battle over voter ID has been thrust into the forefront of this election cycle’s news coverage, and advocates on both sides of the issue have been working hard to win the hearts and minds of voters, even as most politicos are focused on getting whatever votes they can to win on Tuesday.

North Carolina is one of many states in the U.S. where no documentation is required to vote; and in this last ambush video from James O’Keefe, a series of encounters with North Carolina election officials shows just how easy it can be for an imposter to cast multiple votes.

By this time in 2016, the state government hopes, naysayers who see the voter ID law as a barrier to minorities and the poor will see hundreds of thousands of new, zero-cost IDs coming out of voters’ wallets and purses.

For now, though, O’Keefe is using North Carolina as a proxy for the other 42 states – and the District of Columbia – which don’t require voters to show a photo ID.

His crew used publicly available election rolls to identify ‘inactive’ voters and then chose 30-year-old men for him to impersonate.

The final footage shows election officials, over and over, accepting O’Keefe’s claim that he was one of those people.

‘With almost three-quarters-of-a-million inactive voters and no voter ID law in place, we could have turned the election results for most major candidates in the state,’ he claimed Monday.

‘What we uncovered in this video illustrates how easy it would be for a well-orchestrated campaign with no regard for the law to change the outcome of a major election. Voter laws across the country need to be changed immediately to prevent this sort of potential voter fraud.’

As you can see, it took encounters at several different polling places before elections judges smelled a rat—but they had no real legal mechanism they could use to justify witholding a ballot:

This time he strolled into polling places in Raleigh, Durham and Greensboro to see how easy it would be to vote fraudulently in the name of another person. He was offered twenty ballots at a variety of polling places before a pair of officials finally challenged him.

‘They wanted to protect the system,’ O’Keefe says in the video, released exclusively to MailOnline. ‘They had to break the rules to do it.’

‘Of all of the undercover investigations I’ve conducted, this was by far the easiest,’he said Monday.

‘They were willing to pass out fraudulently obtained ballots like it was Halloween candy.’

This video may not be the decisive conversation-ender in the debate over voter ID—after all, no ID is required in North Carolina, which puts election judges in a terrible place even when they do suspect fraud—but it does throw a wrench into the works of a liberal machine that consistently insists that voter fraud couldn’t possibly cause enough problems justifying what they believe to be restrictive voter ID laws.

I’ve read of cases where a large bus full of people pulls up to a polling place, and as the folks step off they’re handed an index card with a name and address printed on it. That’s the information they use to collect a ballot inside, and vote as that person.

Then they pile back on the bus, and proceed (presumably) on to the next polling place using a new stack of index cards.

The space they just vacated? No worries, here comes another bus.

Hmmm, the name is redacted throughout, no explicit link to Taaffe. Sounds like him, but not explicit.

Out of curiosity, do you have any cites for these cases you’ve read?

You can have ad hoc vote fraud.

Or you can have industrial-scale vote fraud. And in some places, that level of fraud is just accepted. It is a given.

Like Chicago. “Home” of Barracula. When he isn’t claiming Hawaii.

When my polling place was changed after 9/11 (from the local armory to a church), I got the voter ID cards of the previous owners of my house. I could not get them off the rolls even though I knew they had moved to Texas. So I checked to see if they had voted. Eventually, they went to inactive status where ID was required to vote. Only then did I shred their cards. But, it would have been very easy to have some friends come in to vote under their name.

Under current OK law, the voter ID which is mailed to your home is acceptable for voting. Most people just show their drivers license. There is also a procedure to follow if you refuse to show an ID.

I suspect that the many options for ID is why the OK law has not been challenged in court. The law also passed during the 2010 election with approval of 74% of the ballots cast.

I think maybe when I go vote in Illinois tomorrow I’ll bring an index card with my name & address on it, obviously reading from it when they ask for my info. See what happens.

Have your signature on the card, and have a difficult time replicating it (new Illinois anti-ID law bans election judges looking at your ID if not required by a particular applicable county registration policy)
Many low paid almost untrained election judges will allow voters to see the signature they are trying to match.
Both parties.

funny thing that… for the first time in several elections i pulled a republican ticket in the primary. It’s a Chicagoland thing, usually Republican’s don’t bother running so your only choice for local elections is to pull a Democrat ticket. I wasn’t able to reproduce the signature on the judges screen so the election judge refused to give me a ballot. I produced my DL, the election judge showed me the signature on his computer and it wasn’t mine. noted my signature was the same as on my DL. Wonder how that could happen? Never had a problem when i pulled a democratic ticket in the primary.

Meanwhile, my wife who was born in Santa Barbara to permanent resident parents, moved back to Mexico with them at 2 months old and returned to the US just about 5 years ago, gets through without a hitch. She doesn’t vote in primary elections.

I love her quote about voter ID. “Mexico, which is basically a third world country, can pull off voter IDs. There is no reason we can’t do that here. Corruption is corruption. the US just found a way to make it legal.”

Even third-world nations require positive identification in order to vote. America doesn’t even qualify for third-world status. Perhaps America is simply a failed state. A dumping ground for unwanted second and third-world citizens, and a stem cell harvester of unwanted first-world babies.

Democrats have been working for years to make vote fraud easier. In communities where they dominate (like King County WA) they start with a 15 to 20% edge and if thats not enough they will find boxes of ballots that were accidentally mis-laid just when the Republican thinks he has won. Since they own the judges and the other officials they get away with it every time.
Reform? We don’t need no stinking reform!

Until the early 1990s even the Cook County Board of Elections BofE]conducted a canvass six weeks before each general election. One Democrat and one Republican election judge would go door to door checking if the voters still lived where they were registered. If a residence looked vacant they could remove the name from the rolls subject to them showing up at the BofE with ID. Then it changed to mailing out new voter registration cards before each election with the instructions to the USPS not to forward them if the addressee had moved.

Where I currently live in North Carolina not only is their no canvass, but it is hard to remove someone from the voter rolls unless the BofE catches it when the person moves to a different precinct in the same county. A friend’s wife deserted him and moved out of state ten years ago. She died more than five years ago. She is still on the voter rolls because only a current husband, parent, sibling or offspring has the right to notify the BofE of the voter’s demise. I believe if the same county issues the death certificate that information is shared with the BofE. But as the regional hospital is in a different county, I suspect the county BofE is seldom, if ever, informed.

The head of the BofE complains that she is not allowed to removed a name even if she went to that person’s funeral!