UN to US: Step Away from the Weed

UN to US: Step Away from the Weed 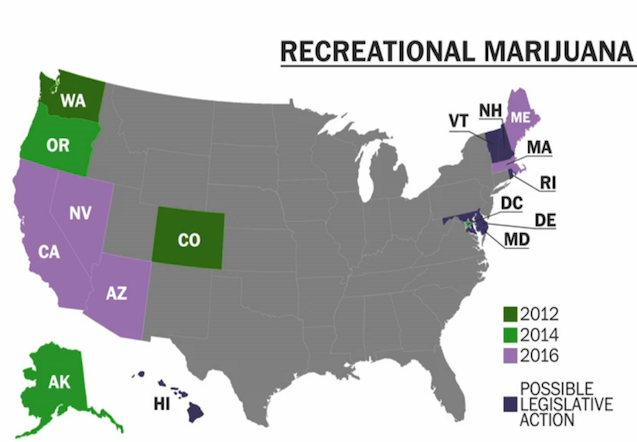 Residents of Oregon, Alaska, and the District of Columbia voted in this month’s election to legalize marijuana within their states’ borders, and this has some officials at the United Nations working overtime to convince U.S. officials to force the states to get in line with international norms.

“I don’t see how (the new laws) can be compatible with existing conventions,” Yury Fedotov, executive director of the United Nations Office on Drugs and Crime (UNODC), told reporters.

Asked whether there was anything the UNODC could do about it, Fedotov said he would raise the problem next week with the U.S. State Department and other U.N. agencies.

After Washington state and Colorado voted in 2012 to legalize recreational marijuana, the Justice Department made waves when it announced that it wouldn’t challenge the new laws, causing some to question whether or not this could cause similar legislative initiatives in other states.

Now, two more states and the District have voted to legalize, which means that if the UN wants to roll back legalization, they’ll need to work fast, because the legislative trend is spreading:


The UN is concerned that the trend we’re seeing in the US is part of a greater global trend that shows more tolerance for recreational use of the drug:

Fedotov suggested the U.S. developments may be part of a wider trend that he said the UNODC was following.

On the international level, Uruguay’s parliament in late 2013 approved a bill to legalize and regulate the production and sale of marijuana — the first country to do so.

The International Narcotics Control Board (INCB) has said Uruguay’s new bill contravened the 1961 Single Convention on Narcotic Drugs, which it says requires states to limit the use of cannabis to medical and scientific purposes, due to its dependence-producing potential. The Vienna-based INCB monitors compliance with this and two other drug control treaties.

The UN is notorious for authoring and flogging treaties that address everything from free speech to gender equality, but the thing they’re best at is ignoring state sovereignty as it is defined in the Constitution. Of course the UN (and their loyal NGO lieutenants) are free to ask the Administration to abide by their non-binding treaties; they’re even free to ask the Administration to enforce federal drug laws—but that’s not their premise. Their premise is that there exists an international norm that the states are flaunting, and it’s the Administration’s job to get those states in line with the prescribed norm.

Whether you support legalization or not, this issue is a hill to die on. If it were just about pot, I’d say we should ignore the UN and let voters choose to either welcome or reject their new stoner overlords; but this isn’t just about pot. This is about an international organization attempting to pierce the protection of the Constitution and insert itself into state-level governance.

That’s the stuff downfalls are made of.

Have I missed something? Isn’t marijuana still against Federal law? What happened to Federal supremacy overriding state law?

You are correct. It is against federal law and that means something. The thing is that the Feds can not force local police forces to enforce federal law. They can raid growers and dispensers pretty easy if they choose but they do not have the manpower to police it like the locals can.

Also keep in mind that the federal politicians know that these laws are popular in the states that have passed them. So many are afraid to cross that line for fear of the voters backing the other party.

If you google around a bit, you will see that the Obama administration was pretty busy cracking down on the industry up until about 2012-2013 but seems to have backed off. The fact that state after state backing these laws seems to have given him pause.

I’m not entirely sure whether I am pro or anti pot. I would have prefered to wait a few years and see how Colorado and Washington worked out but the voters in many states seem to disagree. One thing I am sure of is that we spend an awful lot of cash chasing potheads when the drug doesn’t seem to be any worse than alcohol or tobacco. So I do know which way I am leaning. . .

Watch, though. If you ask me, the Fed DOJ is waiting for a critical mass of states to legalize and for there to be enough users, and then they’ll crack down and usurp states’ rights and sovereignty, using their “defiance” of the “supreme law of the land” as a catalyst.

It’s not Holder’s or Obama’s place to just decide to not enforce a federal law. But they’re doing it. The law is still valid and they can just decide to enforce it at any time, putting every marijuana user in serious legal jeopardy.

There’s a big, valid 10th Amendment challenge just waiting, lurking out there for the right state to make a stand and say that a State, which produces, grows, and consumes its own marijuana is self-contained, and thus not subject to federal law under the Constitution’s “Interstate Commerce” clause (which is what Congress has shoe-horned the drug laws under).

The DOJ memo on state pot laws was designed to undermine the controlled substances act and it has had that effect. Hard to see how state laws like Washington’s don’t operate to obstruct the purposes of the CSA. Whether good or bad, the CSA includes findings that enforcement at the local level is necessary to keep the product out of interstate commerce. Allowing massive state licensed growing operations in WA and CO is already contributing to the amount of pot available in interstate commerce. DOJ should be seeking to enjoin enforcement of Washington’s law, probably also Colorado’s. Instead, DOJ announced they would be ‘monitoring’ the situation and established a set of priorities that have no grounding in the CSA, in other words by use of an enforcement memo DOj rewrote the CSA to severely restrict its application.

DOJ has seizure authority and pot sellers in WA and elsewhere are advertising. Not much cost would be involved in simply showing up and seizing inventory, including from state licensed stores.

Further, states are advancing the fiction that by receiving a license one group of criminals (under federal law) is somehow now legitimized by the state (they aren’t) but with federal connivance these sellers are effectively insulated. This has the effect of making the state an actor in the pot market as an enforcer against some criminals to the advantage of others. Not a good thing.

The UN isn’t too thrilled about our 2nd Amendment either. What we need is a scientific approach to this (it is called political science after all). We need to take one area and segregate it off and run it exactly as the UN would dictate.

Perhaps Massachusetts. They are pretty close anyway and most would probably not notice the change. Then, after 20 years (a generation) compare life in UNassachusetts with, say Texas.

We might want to avoid using MIT Economists as evaluators.

Dear UN, in response to your comments about marijuana I’m trying my best not to be rude, so let me quote Eminem, “So I just, throw up a middle finger and let it linger”

How very odd. The UN is concerned about consumption of psychogenic drugs, but they are considering an invitation from Planned Parenthood to join them in the sewer. What is the UN smoking? Their concern is clearly not about human lives. Perhaps it’s about money.

Yeah, it all comes down to the paradox of normalizing premeditated abortion of a wholly innocent human life and every other purported “good” intention. How do people reconcile human evolution beginning with conception and the faith-based exemption that legalized, and the “right” that normalized, premeditated abortion of a human life for pleasure and convenience? Perhaps it’s about money.

UN vs liberal pot smokers. I just love the irony.

Perhaps they will send blue-helmeted peacekeepers to patrol our streets searching people for illicit pot?

I kind of doubt CA will legalize pot in 2016. The entrenched “Big Pot” interests want to keep recreational marijuana illegal to keep the number of producers down and the price — up. Right now pot is relatively expensive because it’s semi-legal. If regulations are relaxed, more and more dispensaries will open up and the price will plummet.

Don’t forget that the US constitution says treaties rank equal with federal laws, and override all state laws and constitutions that contradict them.

Had this argument back in 1973 (whether to legalize pot). Our consensus was that legalized pot would likely mean government controlled pot, meaning it would become more expensive and suffer in quality, as just about all government run things do. After that, a black market for cheaper, better pot would emerge, and we’d be right back where we started.

Bear in mind we were all quite stoned as we worked this out.

You managed to work that out while stoned, yet too many people who supposedly value freedom and individual liberty can’t figure it out while straight and sober.