BDS destroys everything it touches.

The latest is that anti-Israel students took over control of the operating council of the United Automobile Workers (UAW) Local 2865, comprised of over 12,000 graduate student employees. They used that control to send to the membership for a vote on December 4 a wide-ranging anti-Israel resolution.

What makes this resolution different is that it turns Grad Student union members into activists inside the classroom, calling on them to honor the academic and cultural boycott in their university teaching capacity. This places the union vote far outside any of the other academic boycotts, such as by the American Studies Association, which did not even purport to infringe upon professional responsibilities in the teaching of courses.

As in all these efforts, the anti-Israel activists position themselves to control the flow of information to members to filter out contrary viewpoints. Since in the real world few people turn out to vote on such issues other than committed activists, resolutions can pass without a majority of the entire membership agreeing.

As reported at Algemeiner:

According to informedgrads.org, a group of union members opposed to the BDS motion, the Joint Council has demonstrated utter contempt for basic democratic procedures. UAW 2865 is, the group says, “already sponsoring BDS and anti-Israel activities without waiting for the vote,” engaging in such activities as attending and endorsing anti-Israel demonstrations, including the violent blockade of Israeli ships docking at the port in Oakland. Additionally, around $50,000 of union money has already been spent on promoting the BDS campaign, prompting informedgrads.org to protest at the  “redirecting of political capital that should be used to push our university administrators to improve our working conditions.”

“The UC administration is not required to consider these calls for boycotts and divestment, and they have unequivocally stated that they oppose such actions,” the group adds.

But there are other problems with the resolution. It’s almost certainly illegal and violates the UAW’s collective bargaining agreement, as announced by the American Center for Law & Justice (ACLJ) on November 24:

The ACLJ today sent letters to the University of California, the UAW, and the local chapter of the student union expressing concern about the planned vote – calling any move to join the boycott discriminatory action that is unacceptable.

The ACLJ contends that approving such a boycott is well outside the union’s traditional role of negotiating the terms and conditions of employment, would cause California graduate students to violate state law and university policies by openly discriminating in their work on the basis of national origin.

Compounding the discrimination, the union is calling on its members to teach anti-Israel propaganda in the classroom, violating the academic freedom of students and misappropriating state classroom time for an explicitly ideological (and extreme) agenda.

Academic boycotts of Israel have been rightly condemned across the ideological spectrum as inimical to academic freedom. The ACLJ is calling on the union to cancel its vote, or—if the vote is not canceled—for its members to reject unlawful discrimination.

Further, the ACLJ is calling on the University of California to take steps to ensure that Israeli scholars and students are fully protected from discrimination and calling on the UAW to take all available steps to block the inherently discriminatory actions of its local chapter.

Last month, the ACLJ was successful in getting the American Studies Association (ASA) to reverse course on its plan for an anti-Israel boycott. The ASA had planned to boycott Israeli academics and academic institutions at its annual meeting in Los Angeles. The ACLJ sent a letter detailing how enforcing the anti-Israel boycott would cause Westin Bonaventure Hotel & Suites, which was hosting the ASA convention, to discriminate on the basis of national origin, race, and religion in violation of California law. The ASA reversed course and changed its policy.

American Center for Law and Justice Anti-Boycott Letter to UAW

The national UAW is not happy with this move and does not support it : 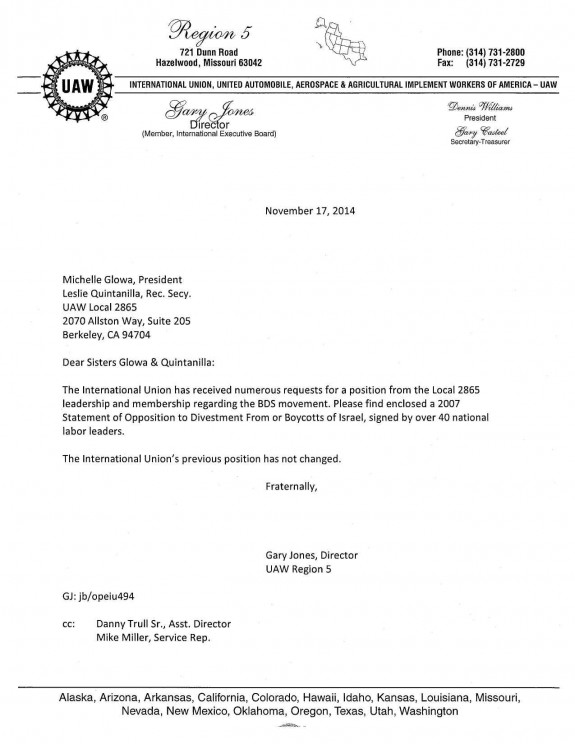 Neither does the California Teamsters, which represents nearly 250,000 workers statewide and 14,000 workers in the UC system:

Whatever your motives, we cannot conceive of an action more hostile to the interests of our members and more antithetical to the most basic principles of the union movement than for a union to call for actions which are intended to do harm to the economic security of other union members. We would find it difficult to ask our members to support your union in a labor dispute with the University of California so long as you are engaged in activities that are fundamentally hostile to their interests.

I don’t know how the vote will go.

If the resolution passes, hopefully this illegal action will be ground for the UC system to decertify the Grad Student Union since it will be breaching not only the collective bargaining agreement, but also California law and the UC system’s own rules.

Regardless, it is clear once again that there is nothing the boycotters will not hesitate to destroy, including their own universities and students, in the quest to destroy Israel.  That is a point that needs to be made time and again:

BDS destroys everything it touches.

Would BDS have received so much traction in this country 15 years ago? It really seems like BDS accelerating, hand-in-hand with political anti-Americanism, anti-capitalism etc.

The absolute CIRCUS which would ensue from the University of California System decertifying the Grad Student Union and the screaming by the BDS ‘activists’ about how their democracy is being trampled while the UAW leadership strips those same activists of leadership positions will be a hoot to watch.

It will make the BDS crowd fight the UAW and give everybody involved black eyes. I love it when my enemies fight each other. Pass the popcorn.

Unions? Doing the right thing? Pardon me while I cover the car in case one of the pigs defecates.

It is cowardly to do something like while wearing a mask.

They remind me of the Klan.