This driver saw it all coming

This driver saw it all coming

but there was nothing she could do about it. 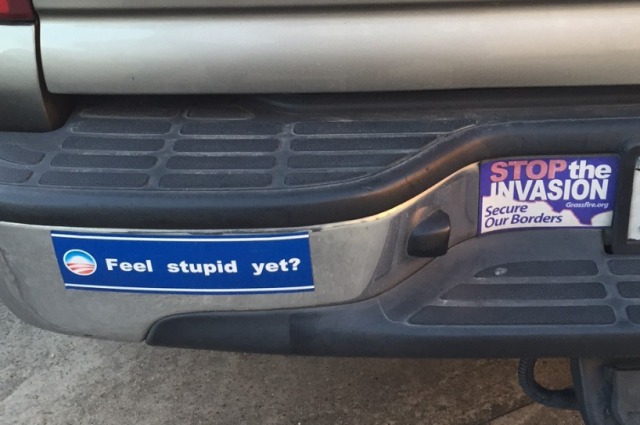 Seems that this driver had advanced knowledge of last night’s immigration speech.

From a reader in Houston:

It seems people in TX are fed up with our Leader.

Working class people just got smacked. Illegals are now empowered to take their jobs at the the post office, the fire department, police department, etc. They won’t just be cutting grass and framing houses now. They will be taking the jobs that Americans Do Want!

i’d put that sticker on my car, but here in Lost Angels, #Failifornia, it, and my car would be trashed in a day or two.

fing fascists that they are here.

That’s the reason I drive a car that is old enough to vote.

Will all illegal immigrant felons please get in line for your background check. Thank you.

Gov. Perry should call up the militia and man the border.

What I put on my facebook page about that:
U.S. Constitution Article 1 Section 10 No State shall, without the Consent of Congress, lay any Duty of Tonnage, keep Troops, or Ships of War in time of Peace, enter into any Agreement or Compact with another State, or with a foreign Power, or engage in War, unless actually invaded, or in such imminent Danger as will not admit of delay.

Well, the border states are being invaded, and the president has announced he’s OK with that. If I were a border governor, I would disagree. Declare an invasion underway. And activate the National Guard. And fortify the border, with standing orders to shoot anyone, man, woman, or child crossing the border other than legally at a designated border crossing. Unless our new king sends in the U.S. Army to stop the governors, he won’t be able to stop the governors from doing so. And the U.S. Army is likely to tell him “No.”. Correction. Will tell him “No.”.

Wonder if this truck was spotted in Sheila Jackson Lee’s Houston district ….

How does that woman get reelected?!?! What a disgrace.

They sure are, remember about the start of ocare when an article was published about a couple liberal dummies who were surprised to find out their rates went up and part of the rate included having to help fund those who didn’t get assistance?
As I recall the lady in the article didn’t think she’d be the one paying for it.
Stupid is as stupid elects.

“Stupid is as stupid does. ”