There’s a Bear in the Woods

There’s a Bear in the Woods

And this driver can see it. 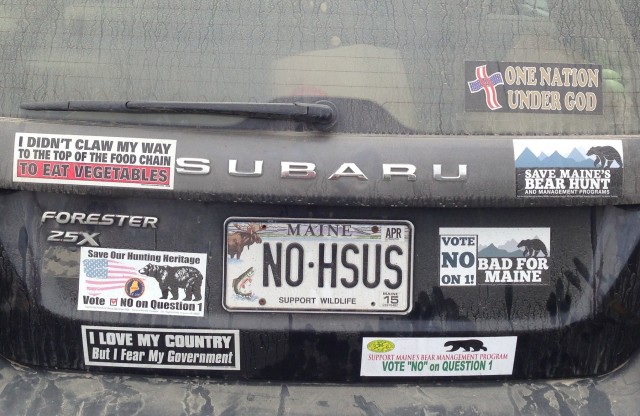 The plethora of bear stickers are in response to a referendum that would outlaw 93% of bear hunting in Maine. (http://www.maine.gov/ifw/wildlife/species/mammals/2014BearReferendum.html)

As someone who has had a bear destroy property in my backyard very close to my house, I am of the opinion that an overpopulation of hungry bears would be a bad thing.

The license plate refers to a national group (Humane Society of the United States) that has been bankrolling a “local” front group and funding the “yes” side. If this passes it will likely be due to urban voters who will never have to deal with the real-life consequences of that vote.

My favorite one on there though is “I didn’t claw my way to the top of the food chain to eat vegetables”. 😀

Here’s the top portion of the rear hatch:

By the way, the Bear referendum failed.

This driver is just following Ronald Reagan’s advice, be as strong as the bear, if there is a bear.

They hunt bear near me. As a result while I see bear sign on my property from time to time, with one exception the sign is always well away from the house. Nor do I ever see the bears themselves.

The only time I ever had sign near my house was after the DNR shut down a moron who had moved here from the city to a place on the other side of the mountain. He thought it was cute feed a mother and her three cubs so he could show the photos to his friends.

Their food subsidies cut off, the four went on a week long rampage across their range. My Shepherd-Akita cross had to be put down a short time earlier, so I was without a dog to deter them. First the bears pulled a latched 55 gallon drum of dog food off my back porch an tossed it around the yard. The next day they upended a large outdoor grill. They they ripped the side off of an old smokehouse I had converted to use as a garden shed. They even pulled down several bird houses, including one I had fasted to a tree with 2-1/2 inch wood screws. They did similar damage at several nearby homes.

I was afraid they’d have to be shot, but a lot of firecrackers and a couple of relentless hounds seemed to convinced them life would be easier if they stayed in the woods and foraged as nature meant them to.

I can’t find it on “My Face in a Tube”, but one of my favorite one liners from The Mentalist was the time they asked a relative of a murder victim “Did he own a gun?” and she replied “Oh, he didn’t believe in guns”. Jane then asks with a puzzled expression “He didn’t believe guns exist??”

I think that pretty much sums up the Portland people…

The Humane Society of the U.S. was in the early stages of organizing and lobbying state legislators here in Missouri to ban certain aspects of farming that they don’t like. The pro-farming groups recognized the threat early enough that they put on the ballot a proposed amendment, The Right to Farm amendment, to enshrine in our state constitution the right to farm. The far left loons on the Kansas City Star editorial board opposed it, of course, in a farm state. It passed with only about 53% of the vote. The amendment now provides an extra layer of protection against some of the policies that the HSUS has successfully lobbied for and gotten enacted in other states.

If they get their way, the practical result will be that farmers will be put out of business, food prices will rise, and we will even start importing basic foodstuffs that we now produce domestically. It’s insane.

The HSUS in some ways is like the Southern Poverty Law Center. It started out with a noble mission but it’s grown so large that its current mission is now often counter-productive. When I was researching the Right to Farm amendment back in July/August before it was voted on, I ran across this statistic a few places: 85% of HSUS fundraising propaganda features shelter animals, but they do not operate a single local pet shelter AND only 1% of its annual budget supports animal shelter activities. So those TV commercials you see with starving and abused pets that they use to tug on your heartstrings to get you to donate money is extremely misleading. That’s a tiny, miniscule part of their mission. CharityWatch gives them a “D” rating. The current president of HSUS said when he was younger that he’d like to ban people from having dogs and cats as pets. He claims not to think that way any longer. Who knows.

HSUS is not what many people think it is. If you are a donor, do your homework.