MSNBC is always good for a hacktastic laugh 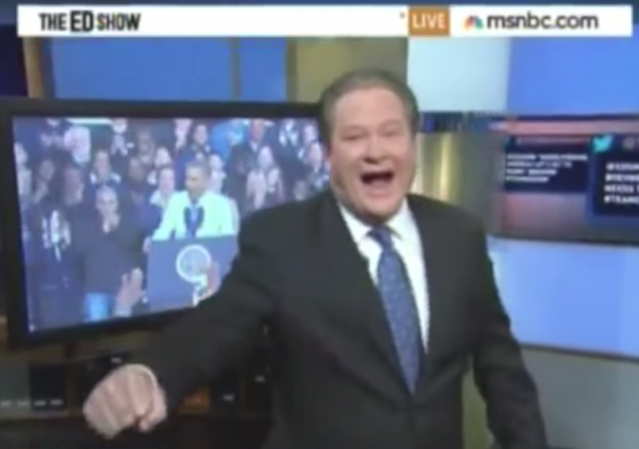 Our good friends over at MRC put together a mashup of some of Ed Schultz’s finest moments.

From insisting rather emphatically that, “there are not glitches” with Healthcare.gov to yelling, “this is good! This is great for America!” while talking about Obamacare, Schultz is not one to disappoint when it comes to perpetual ridiculousness.

Then there’s this little gem: “What do Christian values mean to Republicans? They hide behind their plastic Jesus.” I have no idea what a plastic Jesus is outside of a Christmas nativity scene, but ok.

I think I need to wipe the spit off the microphone now!

Newsbusters first reported that the liberal TV talker received $190,000 from the Communications Workers of America for “representational activities” in 2011. CWA president Larry Cohen is a regular guest on Schultz’s radio program.

In 2010 his union salaries totaled a comparatively small $37,350. The American Federation of State, County and Municipal Employees (AFSCME); the International Brotherhood of Electrical Workers (IBEW); and the Communications Workers of America (CWA) paid him $15,000, $14,850 and $7,500, respectively.

The unions classified the 2010 payments to Schultz as “union administration” expenses, according to Labor Department records.

Schultz’s union salaries doubled since the debut of “The Ed Show” on MSNBC in 2009.

The unions’ records, filed with the federal government in compliance with the Labor Management Reporting and Disclosure Act, show that his financial ties with unions date back to 2005.

Schultz received a total of $42,500 from various unions in 2009 for “political activities.” The National Air Traffic Controllers Association, AFSCME and the Building and Construction Trades union all paid Schultz that year.

When Grubber said that voters were stupid, he was not talking about people like me and others here, who were hopping up and down saying that ObamaDoggle was ALLLLLLlllllll lies, up and down. He was NOT talking about the people who were forming the TEA party impulse, because we were never fooled.

The stupid people who were “stupid”, according to Grubber, were Ed’s folks. THEY were the ones Grubber lied to.

Ed should be hopping mad at Braccula.

“I have no idea what a plastic Jesus is outside of a Christmas nativity scene, but ok.”

“I don’t care if it rains or freezes
Long as I got my plastic Jesus
Sitting there on the dashboard of my car.
Comes in colors pink and pleasant,
Glows in the dark cause it’s irridescent.
Get yourself one if you’re going far.”

[Note: these appear to be modified lyrics, but this is how I learned them way back in the day]

You forgot the verse with Mary in the abalone shell!

I once knew a fellow who had a plastic Jesus on his truck dashboard (very common a few decades ago) that was also a bobblehead.

The little plastic Jesus statues were especially popular among truck drivers and other professional drivers, in a ‘God is my co-pilot’ way.

He knows Rush has ratings and he thinks this is how Rush behaves, so that must be the way to get ratings. Poor Ed.

Geez, what a ludicrous blowhard.

was that right? Did I get the PC-speak right for “never go full retard?”

My Grandparents had a “plastic Jesus” on the dashboard on all of their cars. In the days before seat belts and air bags, it was the best you could do to protect yourself.

Passenger to tractor-trailer driver: “Is that Jesus?” indicating plastic statue in middle of dash facing driver.

“Shouldn’t he be facing the other way then?”

Jesus sees all. But this way, he can keep a particular eye on what’s goin’ on in the sleeper…

Maybe He was just showing off? He’s allowed!

You know, if someone wrote a book or a play about a network like MSNBC, it would have to be called satire or “dark comedy”. Even Paddy Chayefsky, as jaded and cynical as he was, dared not push this far in ‘Network’.

That NBC would willingly lose millions on this train wreck should tell us something about “follow the money”. Someone, somewhere is getting paid, big time (G.E.?), to leave this stuff on the air for the edification of, and consumption by, far Left.