The Republican Freshman Class is ready to work

The Republican Freshman Class is ready to work

Hang on to your hats, Dems. 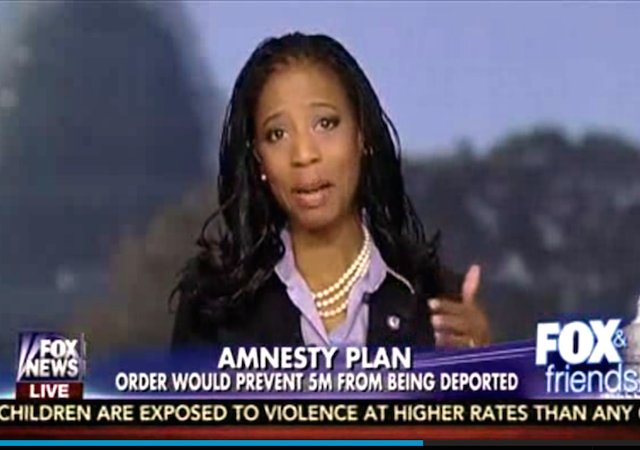 The Republican Wave of newly-elected GOP freshmen have been put through their paces at new member orientation, and are preparing to get to work after January’s swearing in.

Newly elected from Utah’s 4th Congressional District, Mia Love has wasted no time letting Democrats know that she doesn’t intend on being polite about Obama’s plan to fundamentally change immigration law in America via executive order.

The Daily Caller has the video:

“It is Congress’ job under Article 1, Section 8, to create a uniform rule of naturalization, a way in,” she continued. “It should be done line by line, section by section with the input of the public instead of being done by one person. It looks more like a dictatorship when a president is unilaterally making decisions for the American people.”

GOP freshmen aren’t limiting their criticism to the President’s plans. Texas freshman Will Hurd (TX-23) is one of several freshmen being courted by the oft-controversial Congressional Black Caucus, and he hasn’t been shy about holding off on his decision to join (or not to join.)

“They’re great members, and I’m looking forward to working with them,” Hurd said. “Whether or not I join the committee, we haven’t made that decision.”

The CBC has also offered membership to Mia Love of Utah, who has said she plans to join the group. Love, a former mayor, is the first black female Republican elected to Congress.

The caucus hasn’t included a Republican since Allen West of Florida lost his re-election bid in 2012. He’s moving to Dallas in January to lead a conservative think tank, the National Center for Policy Analysis.

Sen. Tim Scott, a South Carolina Republican who served one term in the House and moved to the Senate last year, never joined the caucus and doesn’t plan to do so.

The next two years will be difficult by default, but it’s good to see our new members having the confidence to speak out to the press and against the Obama administration’s threats. They may be new, but they’re taking the lead and owning their new positions, and that gives me hope for this class.

The Republican caucus is changing—is it possible that their messaging tactics will change along with it?

So the CBC invited Hurd to join … but not Love? What is this – the Democratic CBC War on Women?

It’s in the quoted section above:

“The CBC has also offered membership to Mia Love of Utah, who has said she plans to join the group.”

The CBC has also offered membership to Mia Love of Utah, who has said she plans to join the group. Love, a former mayor, is the first black female Republican elected to Congress.

I keep reading that Article I, section 1 stuff over and over. Though the document is written in pretty clear English, perhaps it’s best that I’m not a constitutional scholar like the president and the “Yes, sir” types with whom he surrounds himself. That “All legislative powers herein granted shall be vested in a Congress of the United States” is apparently quite magical since “All” doesn’t mean “all” after all.

LOVE that Love. I hope I always can…

Amen, and I pray that Col. West moves into Tarrant County as his home while working in Dallas. Not that I want to like really improve my neighborhood or anything.

But as they say at Railhead BBQ, life is too short to live in Dallas.

Railhead BBQ is awesome, and the fries… they’re out of this world good.

How nice of the GOP leadership to let the freshmen do the tough talking.

And the Deemocrat leadership is full of pills…

Careful with the rhetoric; the IRS might be lurking about.

My file was started on a manual typewriter.

I could have sworn it was stone tablet and chisel…

And I bet it was a Brother, brother.

GOP oldtimers won’t take the risk. Send in the freshmen! They’re expendable! If I ran the GOP I’d have everybody throwing flame. Anyone would agree that there are times when a full out political assault is necessary, forced by your opponents’ hand, and if now doesn’t qualify, then I can’t imagine what would. Civil disobedience, something large numbers of grassroots supporters will participate in, as we’ve talked about before.

You start from Texas and I’ll start from NC and we’ll meet in Minnesota. Then you clear everything out to the west coast, while I clear out everything going east. Easy peezy.

I am ready to rock, my friend, lol.

“You take out their archers. I’ll meet you in the middle.”

And William Wallace did. At least in the movie…

maybe its me but I would respect someone more for not joining a group based on their skin color.
hope Love doesn’t join.

I would interpret her joining as a way of impressing upon the rest of the CBC that American who happen to be black are not all required to be Democrats. She might hope to change a mind or two.

Which is a worthy goal.

Of course, it presumes you can find a “mind” to change. Still, it is good to know what the enemy is “thinking”. No harm in that.

I suspect her presence in that caucus will be on paper only. I can’t imagine the CBC would allow a GOP member in on their important meetings and plans.

Well, she could go in whiteface. Just saying.

Anybody remember Rush talking about the “Freshmen Orientation” back in…what was it…1995? He was told that the new guys were all gathered together and told by the leadership that unless they played along, they would not get any committee assignments or other perqs of office.

Yeah, that was when Newt ran the House.

For some reason, a lot of people decided to overlook his entire Speakership except for the ‘1st 100 days’ when the House voted on 9 of the 10 Contract promises. He was always back-stabbing conservatives, and many felt he was more out for his own PR and ego than for the caucus.

Someday somebody will write a tell-all about the CBC… which will then be made into a movie which will bring tears of laughter to all of us. The biggest problem will be casting the CBC itself; Who would play Shirley Chisholm? Shiela Lee Jackson? Hank Johnson?

Shirley Chisholm was one of the most intelligent people to serve in the House in the last century. She was wrong about almost everything, but she was very smart. Some heard her speech impediment only.

But after her, nearly all of them have been crooks. Most blacks elected to Congress are from far more modest circumstances than nearly all the whites, and for some reason many feel this entitles them to flaunt the law to make more money for themselves.

Ever wonder how Jim Clyburn’s daughter, whose only ‘communications’ experience was running a small ‘community’ newspaper into the ground, was appointed to the FCC? Me, too.

Don’t leave out Barbra Jordan. There was a lady with a lot of class and brains.

Oh, those were the days, weren’t they?!

Now, THERE was UGLY…in every possible way…

Mia Love, we hardly knew ye. The GOP leadership got to her. Not yet sworn in, but she has already sold us down the river.

Don’t be too quick to sell yourself down a river!