Local wins will pay off down the road 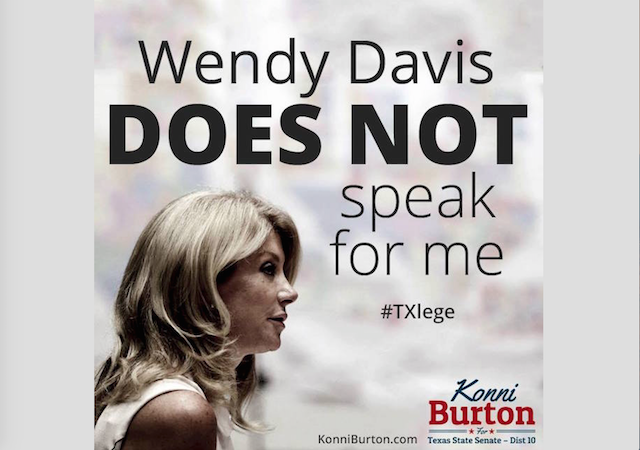 For many living in states not called Texas, it might seem odd that a place most regard as the “reddest” state in the union would fight so hard to gain ground in traditionally-liberal districts. Isn’t a solid governing majority and clean slate of statewide office holders enough?

Not if you want to keep building.

And build Texas has, by electing a full slate of Republicans on the statewide level, defeating Battleground Texas’ initial efforts to elect a Democrat statewide, and making key inroads with both battleground districts and battleground demographics.

Perhaps our most notable achievement this cycle was flipping Wendy Davis’s Senate District, SD-10, in favor of Republicans. When Tea Party candidate Konni Burton first announced her candidacy for Davis’s old seat, many wrote her off as a long-shot; on election night, however, she proved them wrong.

Via the Fort Worth Star-Telegram:

“It’s hard to believe that over 20 months ago I started having conversations with conservatives across Tarrant County about the need for someone to challenge Wendy Davis,” Burton, a Colleyville conservative with Tea Party ties​, told about 300 supporters gathered at the Texas Cowboy Hall of Fame. “We were all sick and tired of being represented by a liberal in Austin who didn’t reflect the conservative values of District 10.

“Tonight, our neighbors have spoken,” she said. “Nationally, the American people have rejected the president’s agenda for our nation. In Texas, the people have sent the Democrats packing, and in Tarrant County, we replaced one of the most radical liberals in Texas with a conservative voice.”

The building didn’t stop with SD-10. Non-traditional outreach efforts implemented statewide made inroads with the Latino community; Senator John Cornyn earned 48% of the Latino vote, while Lieutenant Governor Elect Dan Patrick thumped his Democrat opponent by capturing 53% of the Hispanic male vote. Pro-life candidate Will Hurd upset entrenched Representative Pete Gallego in the battle for a District that stretches from San Antonio all the way to El Paso, and deep blue Dallas County elected its first female DA—who also happens to be a Republican.

The trend spread beyond Texas, and we saw candidates like Mia Love and Tim Scott rise from the attack ad ash heap to secure their seats, and drive back the liberal narrative of the “old, white Republican male.”

In the wake of the 2012 election, Legal Insurrection dedicated itself to a renewed focus on both protecting the positive change we’ve managed to make, and supporting local candidates who work hard to build up conservatives’ momentum.

The point of all this, then, is not to win every battle that comes our way; that would be a futile fight, and pretending it’s not is a colossal waste of time. But by focusing on local level, and supporting strong candidates at every level of the ticket, we engage in the kind of base-building that leads to the kind of momentum that eventually wins elections on the national level.

The kind of candidate that wins at the top of the ticket doesn’t just appear out of thin air—that level of respect and savvy is learned and earned. If we’re serious about rolling back the destructive policies of the Obama administration, we need to be willing to accept this.

We earned a great start on Tuesday night; let’s get to work, and not waste the opportunity we’ve been given.

I hope Republicans keep the names of Wendy Davis and Sandra Fluke alive with a big “You don’t speak for me” campaign in 2016.

Two women who stand for “If thy baby doth offend thee pluck it out”. Two ruinously indolent women.

The word “pluck” implies something small that can be easily removed.

What these women are advocating is something that I think a lot of people who are “middle of the road” in their feelings on abortion find horribly offensive, and that is “late term abortion.”

This procedure is not “plucking” anything. It involves staving in the skull of the baby, vacuuming it’s brains out, then dismembering it while still inside the womb. Then the body parts are removed with forceps. As we learned from testimony in the Kermit Gosnell trial, these body parts are then disposed of like trash, or sometimes just flushed down the toilet.

And roughly 51% of these babies are little girls. “War on Women” indeed.

Sorry to be graphic, but words have meanings, and it’s time we stopped letting the progs move the goalposts by controlling the language.

Either the tea party isn’t dead or Burton is a zombie. If the donkey party wants to be consistent, it has to start screaming about zombie apocalypse.

If it doesn’t then you know that they know the truth – this is basically a tea party nation.

I live in the district next to District 10 and a few years back, we ‘tea party’ types kicked out a moderate republican and replaced him with Kelly Hancock.

Nah, we ain’t dead. We are very much alive and looking to clean house and senate. And in two years, maybe the white house too.

I think there’s a case to make that it was a net good. The election sure shows no bad effect.

2. The TEA party impulse has pushed the GOP strongly in a REFORM direction, and that is really what that impulse is about.

It isn’t about the GOP, and it never was. It IS about big C Conservatism, and reform of the entire government, regardless of the party that needs reformation.

I respectfully disagree that it wasn’t about the GOP.

The GOP has, over the last few decades, forgotten their base and has drifted far left of what they are supposed to represent.

RNC stopped calling me for donations a few years ago when I told them, in no uncertain terms, that until they returned to their core beliefs, and stopped trying to “get along” with treasonists, they would never see another dime.

I see EVERY DAY what liberalism causes.

I live in Oregon.

The population centers around the cities ALWAYS prevail over us “country bumpkins”. Look at a county map of my state. It’s all read, except for 2 tiny dots of blue.

Oregon voters, in their infinite wisdom, just re-elected(4th term) our felon governor, and sent Merkley back to the senate, who votes with Obama 99% of the time, and has written no law in his time there.

It seems that the much balleyhoo’d “Turn Texas Blue” campaign was a dismal failure. Of course, many of us who lived here knew this would be the case and watched with much amusement as little progressives from the prog cesspools flew in here like carpetbaggers and started making noise about how they were going to change our politics. Righhhhht.

There was an interesting article in the Austin American Statesman yesterday. I was in an outhouse at a music festival and they had a stack of them in there to use as toilet paper… but I digress.

Anyway, the gist of the article was that Hays County, which neighbors Travis County and Austin, has gone from 100% Democratic local control to 100% Republican local control (county commissioners and the like) in about 5 years. They attribute this to all the new development and people from out of state moving into the area. They speculate that Conservatives moving into the area to take advantage of Austin’s booming economy don’t want to live in the little Prog bubble that is Travis County so they’ve moved right next door to Hays…. and turned it Red!

Rather than “Turning it Blue”, I think what we’ve seen is almost a “circling of the wagons of conservatism” in Texas, with a lot of conservative people from all around the country getting fed up and moving to a place that many view as “a last bastion of conservatism.”

If I could move my kids and grandkids with me, I’d be in Hill Country right now…