His directing gave us the treasure of The Graduate, and so many other formative movies and plays. 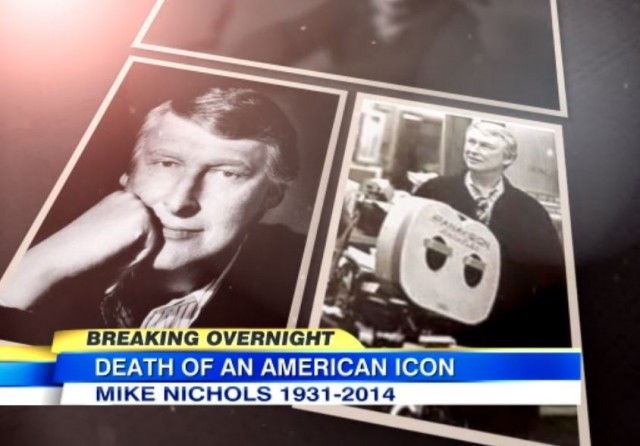 Mike Nichols has died at age 83.

His accomplishments were many, and are reviewed in the ABC News video at the end of this post.

But for me, his great accomplishment was directing The Graduate. There are few movies that had as much of an impact on me growing up as The Graduate.

He was married to Diane Sawyer.

He had 3 children with 2 women, Sawyer was not one of them.

Prof. I’d kinda need you to elaborate on the wonderfulness of “The Graduate”.

‘Cause I can’t see it, personally.

At least it featured a cool car, the Alfa Romeo Spider 1600 Duetto.

I have to agree. The character in the book was much more interesting then the nerd written in the screen play and played by Dustin Hoffman.

I found the anti-Christian imagery of Dustin Hoffman using a crucifix as a weapon deeply disturbing.

Before he was a director, Nichols did a comedy act with Elaine May.

Mr. McGuire: I just want to say one word to you. Just one word.

Mr. McGuire: Are you listening?

Unlike many celebrities who buy show horses, Mike Nichols took an active interest in his animals. That is how I encountered him at an Arabian horse show in Minnesota in 1972.

The daughter of friends of my parents was a horse trainer. In 1955 she married a young actor. By the mid 1960s he had a solid Hollywood career. By 1967 he was working in her parent’s business in small town Minnesota because they didn’t want their daughter raised in Hollywood. In June, 1972 she brought her horses to a show in St Paul where I lived. Nichols was there, too, because he wanted a National title for his best stallion and the path to that title usually meant appearing at every major breed show in the nation. By then the daughter, around age 14, was as horse crazy as her mother. It was also apparent she was going to be a real beauty.

While hanging out in the show barns I saw a drama in one act. Mike Nichols hoisted this pretty teenager onto the back of his champion stallion, Elkin, and was leading the pair around the square block sized barn while telling her how she and Elkin looked great together. When her father spotter her with Nichols there was a flash of terror on his face. He quickly sent her back to her mother’s assigned stalls with a list of chores to do. The two men briefly chatted about show business. It was friendly on the surface, but I could tell the father was miffed at the interest Nichols was showing in his daughter. I didn’t see the daughter anywhere near Nichol’s stalls

At the time I was in college and thought the father was being a real partypooper. Whenever I now read about the exploitation of children in Hollywood I think back to the look on that father’s face and of the two decade hiatus he took from acting to keep his daughter away from Hollywood.

Yeeeeup. Hollywood is…and has been…a toxic place. I was born there, and both parents were “movie people”.

I learned to scuba dive at age nine because my friend, Ricky Dmytryk, son of the director, needed a buddy and his parents considered me a stable kid.

That was just after air had been invented.

But I never wanted any part of Hollywood because I saw the lives of the people there.

“… his parents considered me a stable kid.”

Amazing what you, me, and Eddie Haskell are capable of projecting, eh?

Hey! I was a very mature kid, and seen as quite responsible.

Now I’m seen as a total child and nobody you’d leave your dog or gold fish with.

One of my many jobs at LAPD is auditing officers’ and detectives’ reports.

Every so often I stop to read the usually long narratives written by the officers/detectives of reports that look interesting.

I can’t mention names or specifics obviously, but I was reading one recently where detectives arrested a talent agent for child actors. A man now in his twenties accused the agent of repeatedly raping him for years as a young teenager and threatening him with death if he told his parents or authorities.

Our oldest daughter made the finals of Japan’s biggest beauty contest, but when my wife called me from Japan and told me the talent agency which ran the beauty contest mandated my wife sign a contract whereby our daughter would live in Japan from that time (under the care of a female talent agent) while modelling/doing TV appearances, etc., I said “No way.”

The president of the company had a meeting with my wife and tried to negotiate our daughter spending every summer in Japan. My wife said she’d take our daughter and our other two children to Japan for the entire summer every year.

Again, I said, “No way.” I wasn’t going to give up spending summers with my kids for some shot at entertainment fortune and fame.

My wife and I had huge fights over this, but I put my foot down. My wife said I’d regret it … that I was denying our daughter a wonderful future.

That future has arrived and she’s happy and loves me.

Moral of the story: Women are not always right.

Getting into the entertainment business if fine. But for children, the parents have to be watching at all times. The boy being raped I referenced before was spending weekends overnight at this monster’s house. The parents made a huge mistake.

Once the child’s safety is assured, you then have to weigh the time demands of the entertainment business against having a normal family life and spending time with your children.

My favorite Nichols film was Wolf.

His film with the most interesting premise: Regarding Henry which seemed to imply that the way to bring out the humanity in a lawyer was a non-fatal head wound or a lobotomy.

lol, there’s a joke about a lawyer who got shot six times in the head, but luckily no vital organs were hit.

America, that greatest of countries where their exists no monarchy. No Kings. No Queens (except for flamboyant ones). Yet, Hollywood projects upon society its celebrities, stars, chosen ones. It does so with savvy marketing strategies and ploys and techniques. In doing so, said celebrities and their projects help to fashion and form and influence the culture. And the chattering class yearns for more.
Sorry, aside from some technical creativity and provocative storytelling, Mr. Nichols is simply another contributor to Hollywood’s ebulliently elevated and tortured soul.
Consider for a moment, had Mr. Nicholls shared his storytelling only on paper, would he have garnered as much hoopla? Had his entertaining product been books vis a vis film, would he have garnered as much success?
Simply put, when channeled through Hollywood, our culture showers far more unbalanced fanfare and status upon its players.
Condolences to the Nichols’ family.
To the country that welcomed him with open arms at his tender age of 7? May you continue to survive all of the crap and nonsense spewing out of Hollywood.

i was/am a huge fan of the nichols and may comedy albums. a little bit of humor just got torn from my heart. RIP, mr.nichols.

My favorite Mike Nichols film is Working Girl. I’ve seen it a dozen times over the years, and am never bored watching it. The opening sequence is poignant now too, of Melanie Griffith heading to work on the Staten Island Ferry, with a panoramic view of the World Trade Center Towers, and Carly Simon’s song “Let the River Run” playing on the sound track.

My favorite Nichols films is a toss-up between Catch-22 and Working Girl, but that’s got more to do with Joseph Heller and, ahem, Melanie Griffith than Mike Nichols.

I think Professor Jacobson owes us an explanation of who his Mrs. Robinson was back in the day.