Update: US Atty Loretta Lynch to be nominated to replace Eric Holder

Update: US Atty Loretta Lynch to be nominated to replace Eric Holder 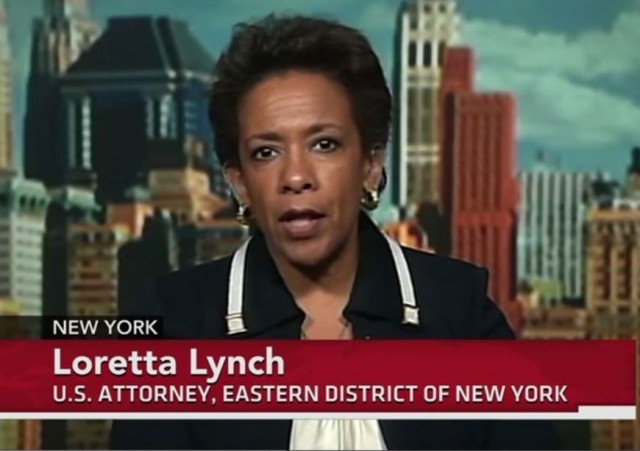 In a second trail-blazing pick for the nation’s top law enforcement officer, President Barack Obama intends to nominate the federal prosecutor in Brooklyn, New York, to become the next attorney general and the first black woman to lead the Justice Department.

Obama’s spokesman said Friday that he will announce his selection of Loretta Lynch from the White House on Saturday. If confirmed by the Senate, she would replace Eric Holder, who announced his resignation in September after serving as the nation’s first black attorney general.

I admit, I’m prejudiced in favor of Loretta Lynch, my law school classmate and then good acquaintance.

Other than a brief encounter at a reunion, I have not had contact with her since 1984, but I’ve followed her career.  While there certainly is more research to be done, I never viewed her as politicized in her conduct as U.S. Attorney for the Eastern District of New York.

It is reported she will be nominated to replace Eric Holder:

US Attorney Loretta Lynch to be tapped by POTUS to be new Atty General, @evanperez reports

(added) The White House says no decision yet:

Josh Earnest, @pressec says Pres. Obama has not made decision on Attorney General pick. There will not be an announcement today. #CBSN

She’s an under-the-radar contender to become the first black woman to head the Justice Department.

Loretta Lynch rarely holds news conferences, does interviews or gives speeches in her current job as U.S. attorney in Brooklyn. But the lack of a paper trail on Lynch hasn’t kept her from emerging in recent weeks as one of only a handful of people still under consideration by the White House to replace the outgoing Eric Holder as attorney general….

Lynch, who grew up in Greensboro, North Carolina, began her career as a federal prosecutor in 1990. While a chief assistant U.S. attorney, she was on the trial team in one of the most sensational police brutality cases in city history, the broomstick torture of Haitian immigrant Abner Louima in a precinct bathroom.

She originally served as U.S. attorney in Brooklyn from 1999 to 2001 before entering private practice. She returned to the position in 2010 and was appointed to the Attorney General’s Advisory Committee, a position that required her to spend more time in Washington and drew her closer to Holder.

During her second tenure at one of the country’s busiest federal districts, Lynch’s office has won convictions in a thwarted, al-Qaida sanctioned plot to attack New York City subways, and charged the head of a Mexican drug cartel with 12 murders. More recently, her office brought tax evasion charges against Republican Congressman Michael Grimm that’s scheduled to go to trial next year.

If your assessment is accurate, Professor, this seems like an odd choice for Obama.

Aside from her pigmentation and gender, I would have expected her boss Preet Bharara, who seems to politicize everything under the sun in rock star manner.

Bharara is not her boss. They’re both USAs, for different districts.

She looks like Al Shawpt’n in drag, especially the forehead and ears. Anybody ever seen them together?

Ridiculing someone — anyone — on the basis of genetic attributes they cannot change is juvenile.

In civilized society we think it’s unacceptable to ridicule people for conspicuous physical deformities or visible scars from some kind of trauma. Ridiculing women because they’re judged “unattractive” or “old hags” (or men because they’re short) is morally no different at all. It’s stupid and uncivilized.

“In civilized society we think it’s unacceptable to ridicule people for conspicuous physical deformities or visible scars from some kind of trauma.”

And where is this mythical civilized society? It certainly hasn’t ever existed in the Western world. And save the sanctimonious indignation for etiquette classes on the proper way to hold forks. Anyone who enters the public realm is fair game for physical satire. And always has been, in fact and fiction — from William Shakespeare’s portrayal of Richard III as a hunchback, emphasizing his physical deformities as a reflection of his inner crookedness; and Mark Twain’s Injun Joe, in fact described with negative racial stereotype to represent a person the antithesis of civilized society. And let’s not forget Red Foxx’s pointed remarks to bulging-eyed Aunt Esther, calling her a ‘Fish-Eyed Fool.” Because many times ‘ugly is as ugly does.’

And if Lynch continues the same racially distorted policies as Holder (the ongoing persecution of George Zimmerman as case in point) then her physical looks are fair game for distortion of her actions.

Yeah, it’s funny that I drew no conclusions about the similarity, except to say they look like they could be twins or the same person. It’s the outraged who drew the negative connotations. Many people have prominent ears, furrowed brows and other protruding, prominent parts. It’s not necessarily a pejorative to point out the obvious.

It should be obvious that there is a resemblance between Shawpt’n and Lynch. Check Google images and you’ll see the the image with her looking up, brow furrowed, as if questioning. Rev. Al has been photographed a jillion times doing the same thing, and there is a stark resemblance.

I guess it’s not PC to be pointing out the striking similarities between Joe Biden and Bob Barker, or Ron Paul and Ian McKlellan, or Sarah Palin and Tina Fey, or Jeff Flake and Matt Conaughey, or Ann Coulter and Tom Petty and Nancy PeloSSi and Steven Tyler… well, you get the idea.

That Sharpton and Lynch look like siblings should go unnoticed?

How many PMSLSD shows and segments would be dedicated to the physical appearance of a conservative appointee?

At any rate none of this inquiry and speculation would be needed if Lynch was succeeding a fair-minded, non-racist, non-zealot, non-vitriolic race-baiting, America-hating psycho political monster.

I disagree about her looks. She looks like a professional woman, to me.

I don’t know anything more about her than what I’ve read here – yet – but I don’t judge a candidate by her body parts, looks, or other superficial attributes.

Her ideology – her ability to be unbiased on policy in her position, to enforce the law regardless of her personal views, to have personal character, integrity – YES, I do judge on those key factors.

Why don’t you post a real photo of yourself as an avatar so we can all make comments.

I’m just pointing out the obvious. Wait until she’s drawn by the political cartoonists. Moreover, wait until she’s carrying on Holder’s Department of Just Us agenda.

This appointment would signal a turn away from outlaw by Barracula.

I therefore predict this is a head-fake.

But will she be willing to indict Holder or Lerner or Jarrett or even Obama? That is the test.

Excellent question. But sadly, she would not indict any of them. Her boss would not let her.

And perhaps that’s the explanation for this odd choice (if indeed it is his choice). They have full confidence that she will blindly follow her Messiah into the minefield.

Lyndsey Graham will vote for her, that’s guaranteed.

Black and female to appeal to Obama’s base, but an appointment not likely to face much opposition from GOP congress.

Then again, she’s a Holder appointee to the AG’s Advisory and now an Obama appointee, so she must be sympatico with Holder/Obama to some degree. That can’t be good, by definition.

If she was appointed to the Attorney General’s Advisory Committee, she has had a say in everything that is already going on.

Why would we expect anything to change?

Appointed to the AG advisory committe? That implies a paper trail that can be examined at confirmation.

I’m very skeptical. Glad you have first-hand knowledge of her, as that is the most encouraging thing in her favor, IMHO.

Is she a fave for some unknown reason…..? A fellow-traveler with O and Holder? Only time will tell.

My guess as to why her boss wasn’t/won’t be appointed: he is going to be the next SCOTUS appointee. If O can get it to happen before the next Senate is sworn in, all the better.

Under the “nuclear option” the Dems invoked, SCOTUS confirmations follow the old rules; they can still be filibustered, and still require a full 60 votes to break.

The question is, does Ted Cruz (because it’ll probably be him) have enough support from his own party to block a confirmation vote?

I just saw where someone I thought was the best man I ever met (circa 1970) pleaded guilty to defrauding the federal government recently. People do change over the decades.

I get the feeling there’s a “Whites Need Not Apply” on the door of Obama’s DOJ.

Low profile? Perhaps not for long. Lynch is the one working with Sharpton stirring up the racial pot over Eric Garner, a 350 lb. asthmatic black guy caught selling stolen cigarettes. He had a heart attack after being placed in a chokehold by a cop at the arrest scene, which happened this past summer.

It looks like she’s also been involved in shaking down a couple of big banks for HUGE fines for this and that.

Sounds like Holder-lite in the making. In any case, obola wouldn’t appoint anyone who wasn’t anxious to forge ahead with his all-black all-the-time agenda.

Worked closely with Eric Holder? Immediate disqualification. Ask her at the hearing whether she will have Holder indicted for various crimes surrounding lies to Congress, contempt of Congress, and arms smuggling.

If Obama appointed her, how good can she be? What exactly has Obama done write in the past 6 years?

Anyone this president would appoint is not likely to be on my wavelength in general. However, with the talk having been about Perez, it sounds like this could be a better choice for the country.

Oh boy, new AG! Now we’ll get to the bottom of Fast & Furious!

As noted by CNN, Lynch will continue the race-based political agenda of the Obama administration.

Imagine if she ran for president with Michelle Obama as VP in 2016? That would be quite a bumper sticker: Lynch Obama.

everything I have read over last few days leads me to believe you are wrong Prof.
I hope I am wrong but I don’t think I will be.

She has been chosen as the firewall between the congress and a holder indictment.