Team owner not surrendering trademark protections without a fight 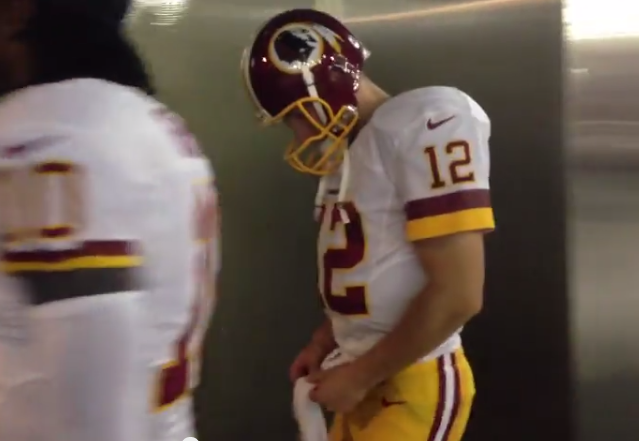 A federal judge has ruled that the owners of the Washington Redskins should be allowed to pursue legal action against a group of Native Americans who are attempting to block the team’s trademark protection. Back in August, the Redskins sued to reverse a previous ruling siding with the activists who seek to destroy the team’s allegedly racist brand, and today, U.S. District Judge Gerald Bruce Lee denied the activists’ request to dismiss the suit.

The Washington Post has the background on the case:

The first group was led by Suzan Shown Harjo, who filed a petition in 1992. The patent office ruled in the group’s favor, but the Redskins appealed in federal court and won on a technicality: The U.S. Court of Appeals for the District of Columbia ruled that Harjo and the other plaintiffs had waited too long after turning 18 to complain about the Redskins name. But the court did not rule on whether the team name was disparaging.

In the new case, Blackhorse and the other defendants filed their petition in 2006 when they were in their late teens and early 20s, ages considered early enough to file their grievances. They argue that federal trademark law bars the patent office from registering trademarks that “may disparage” groups or individuals. The law enables people to petition the office if they’ve been injured by a trademark and feel it was unlawfully awarded.

This is an old battle, but given the level of racial tension in America right now, it’s more relevant than ever. Back in June, the U.S. Patent and Trademark Office canceled the Redskins trademark registration, citing concerns that the branding was disparaging toward Native Americans. (Federal trademark law prohibits registration of trademarks that “may disparage” or bring individuals or groups “into contempt or disrepute.”) In the board’s decision, it said that although many Native Americans do not find the trademark to be disparaging, it based its decision on whether or not there was evidence “that a substantial composite of the Native American population found the term ‘Redskins’ to be disparaging when the respective registrations [were] issued.”

Now, however, team owners can present fresh evidence defending their choice to maintain their trademarks and branding—and they have a strong case. Their argument is twofold: first, that the trademark was not disparaging when obtained, and second, that it is not now, nor was it ever intended to be disparaging.

I think that, given the actual legal standards in play (oh, those,) that activists are going to have a hard time forcing the ‘skins to give up their trademarks. But given the atmosphere of racial tension currently being fueled by our own president, I don’t expect the pressure on the franchise to dissipate any time soon.

They should also bring up the tribal schools using Redskins for their teams.

since charging is now, per msnbc speakers, a racial term I want San Diego sued too.
fair is fair right?

Want to stop this nonsense? Start an organization of self-professed Redskins fans who claim they don’t want their team associated by its name with a bunch of lazy, drunken, backwards people who are incapable of taking care of themselves and are a burden on the taxpayer. See how fast the liberal media and others step in to argue that’s not the association the “Redskins” name is meant to convey!

Because this matters so much to the real plight Native Americans face. Or perhaps a matter of guilt that some elites believe will solve the problems.

The act of caring means more than the act of doing.

Similar with Ferguson. Make Michael Brown innocent as Rosa Parks and pretend that it’s just Bull Conner and racist America that is responsible for the plight of black America.

As Bill Clinton said: “I believe that in ways large and small, peaceful and sometimes violent, that the biggest threat to the future of our children and grandchildren is the poison of identity politics that preaches that our differences are far more important than our common humanity.”

America may suck in many ways, and needs to improve for sure, but do these dissidents really believe they would be better off and more free without it?

Packers = too reminiscent of gay perjoratives (Rams fit here, too)

Chiefs = it’s stupid, every player can’t be the chief

Jets = burning fossil fuels or chemicals for thrust? Um, no.

Did I miss anyone? This professional victim shit is easy. I think I got a future in it.

The next one I see coming from the left is an attack on cities with religious names or named after any person that is not 100% totally politically correct. I mean, San Francisco? Los Angles? Why should a Muslim or a totally non religious person like a Unitarian be forced to live in a city named after a Catholic saint?

And what about Columbus? He is certainly not politically correct anymore. Why should a Native American be forced to live in a city named after Christopher Columbus (even his first name is religious, so he is a double threat).

If our schools were doing a better job of teaching math we could use numbers to name our cities. San Francisco could become 696969 to reflect it’s demographics. Others could be named after famous numbers, like Pi. Cleveland could be named after the last 4 digits of Pi.

I wonder if the federal, state, and local governments and military have licensed their use of “Indian” names. The protection racket is on the prowl to redistribute easy money. Perhaps when a Republican takes over, then we will observe equal outrage. Until then, it’s selective exclusion, and creation of moral hazards. Extraordinary corruption.

The bigger question is who the hell is the federal government and the Patent/Trademark office to be limiting trademarks because someone unassociated feels offended?

Does the 1st Amendment read “Congress shall make no law . . . or abridging the freedom of speech unless it weally, weally hurts someone’s sad widdle feelings . . . “???

BS. Put this ridiculous restriction on the (admittedly very long) list of things to repeal when we regain the White House.

If I were a Redskins fan, I’d insist on dropping any association with “Washington”. Embarrassing.