Convicted of immigration fraud for failing to disclose her conviction for terrorism and incarceration in Israel.

On Monday, November 10, a jury rendered a verdict of guilty against Rasmieh (Rasmea) Odeh on charges that she unlawfully failed to disclose her conviction in Israel of involvement in the 1969 bombing of a supermarket and related offenses, and service of 10 years in Israeli prison (before being released in a prisoner exchange for an Israeli soldier held in Lebanon).

Judge Gerschwin Drain ordered Odeh’s bond revoked, and she was led out of the courtroom in handcuffs and taken into custody pending the March 15, 2015 sentencing.

Odeh now has filed a motion for reconsideration of that decision. The motion and supporting exhibits, as well as an Affidavit, are embedded in full at the bottom of this post.

The gist of the motion is that Odeh has strong ties to the Chicago area and limited (if any) ability to flee:

6. Among the findings made by the Court was that the Defendant did not have sufficient ties to the community, that her attempted escape from an Israeli prison in 1975 evidenced a lack of respect for authority, and that, now that she was convicted and facing possible prison time, she had no incentive to return to Court for sentencing.

The motion then goes on to list varies offers of proof rebutting the court’s findings, including:

C. Attorney James Fennerty, a close friend who has known Ms. Odeh since 1984, even before she came to the United States, would testify that he is willing to have her live in his home, and to act as her custodian, assuring the Court that she would return for sentencing.

G. There are also people from Chicago, who are willing to post their homes as surety to guarantee Ms. Odeh’s bond. The value of these homes exceeds $500,000.

K. Ms. Odeh can be given additional restrictions, including an ankle monitor, if necessary, and frequent reporting, as well as special supervision by Attorney Fennerty or such other person(s) as the Court may find suitable, to satisfy any concern about her staying in place.

Among the exhibits is a petition signed by dozens of people attesting to Odeh’s good character and likelihood she will not flee: 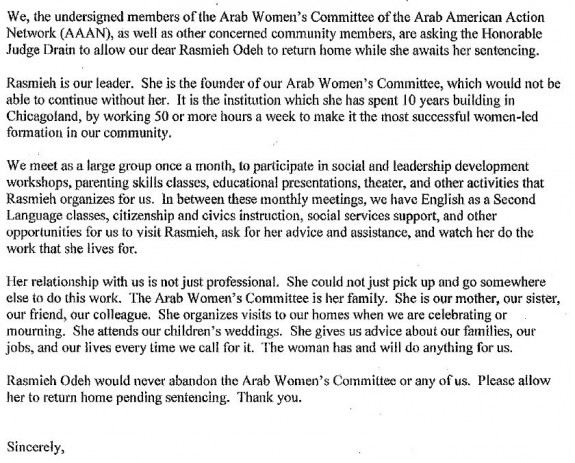 The Judge has ordered the government to respond by November 19.

S***w her. She ain’t no citizen and belongs behind bars.

Let’s just hand her over to Israel.

What’s happened to our humanity?

“She is someone’s murderer.”

Her supporters are delusional if they truly think she has good character. Oh wait…

I’m really not getting the utility of providing bail to someone who has already been convicted pending sentencing unless the sentence is likely to be less than the time until the hearing.

My personal rule about terrorists: if they are unwilling to admit that they committed the terrorist acts that they were convicted of, then they probably aren’t “reformed” terrorists.

I hope that the Judge allows her to post bail and accepts the various offered houses as collateral. It would be heartwarming to watch the terrorist supporters losing their homes as she skips the country.

They would probably find some way to blame Israel.

Her lawyer buddy who has known her since 1984. I bet he knew about her conviction and knew that she was in the US unlawfully. He kept his mouth shut and enabled her fraud. You want him watching her for the government? And several people want to put up their homes which is claimed are worth over $500,000. Are we sure those homes are not located in Detroit with that kind of value?

would like to see someone look deeper into the relationship with that lawyer and see if he facilitated her falsehoods on the immigration forms.

I don’t think it will be suicidal for the Arab Woman’s Committee if Rasmea is a no show. Rasmea has taught them to hate as she hates. No worry, hate replicates, murder the end result.

She is the founder of the Arab Women’s Committee of the Arab American Action Network, which is an affiliate of CAIR, which is the U.S. “front group” for HAMAS and the Muslim Brotherhood.

How could anyone imagine that such a sweet lady with such an impeccable background and such wholly honest and upright associations could be a threat to anyone, much less a [shudder] terrorist?

(Excuse me for a bit; I have to go wash my hands now.)

I guarantee she hides out in a mosque somewhere if she’s let free.