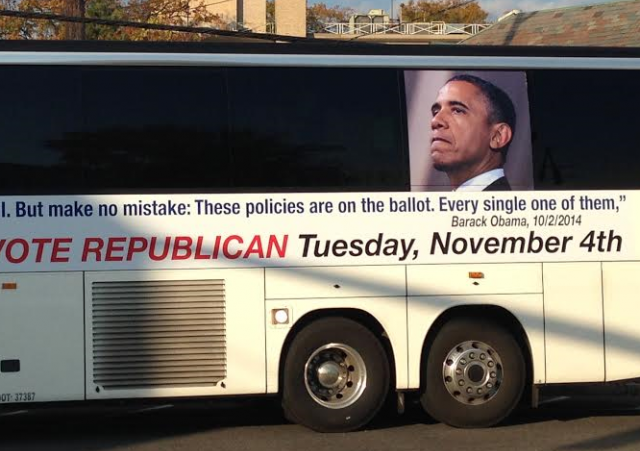 Yes, we are covering the elections tonight focusing — obviously — on the U.S. Senate races, plus a small number of Governorships, primarily Florida and Wisconsin.

We haven’t decided the format yet (that’s how organized we are) but it is sure to be FUN AND EXCITING as in past years.

We may even bring out the Nukes. (Do any longtime readers know what I’m talking about?)

The current plan is to cover the Senate races in two waves based on closing times, starting at 7 p.m. Eastern with a second post at 9 p.m. Eastern, with a separate post for Governorships and the House.

One large post with everything it it, or an attempt to bring order to it all through separate posts based on Senate, Governorships, and the House?

Want to know what I’m predicting for the Senate? (I’ll let you know after the results are in.)

Separate posts. It will be easier to find, manage and update.

The day after Republicans took the house in 2010, I put our “W” flag outside. If you’re not a masochist, a.k.a. a Chicago Cubs fan, you may not be familiar with the tradition at Wrigley field of flying a white flag with a blue letter W on it when the Cubs win. (They fly a blue flag with an L on it most of the time.) Our neighbor, a Chicago area resident for at least 30 years, seriously asked me what the W meant–he thought we were pining for Bush. He’s a die-hard Jan Schakowsky (IL-Commie)voter. I had to explain to him that it meant “Cubs Win.” I had to trust his latent intelligence that he really knew what it meant.

My W flag is ready for tomorrow.

In Jan Schakowsky’s district, every Democrat for most every office runs unopposed. We have no choice to make, save not to cast a vote in those races.

Pull out the stops, Professor, for those of us who must live vicariously. Besides, the best result of tonight will be a lame duck and the beginning of the 2016 campaign.

(I’ll let you know after the results are in.)

Heh. If you’re right, can we have fried chicken tonight? Nukes, too.

I’d recommend one post for senate, and another for all others.

Make that four fried chickens, and a Coke.

And some dry white toast.

Going out on a limb here…

The GOP is dead to me until that law is repealed.

Dead to you, or not, if I can vote for a bunch of Republicans in California, you can get to the polls to.

Isn’t that a journalism class at Columbia?

Awaiting the results of this election is painful to endure so if you’re thinking about the oh-so-loud AC/DC nukes have pity on us.

Should the GOP manage to overcome the voting fraud unleashed by the White House, its time for the Congress to investigate voter fraud over the last few election cycles.
Use subpoena’s. Testify under oath. Hire experienced RICO prosecutors to staff. Follow it from bottom to top.

I profess hopefulness, but I’m too busy trying to suppress my inner Eeyore. (In my office, no appointments, all alone, playing acoustic blues on a cheap guitar, with Rush playing low in the background).

I have a bet with a friend of mine as to what time the News outlets will call the race for John Kasich I have 7:30 and 30 seconds, my friend thinks they will wait at least 5 minutes.

possibly 2 posts, one for senate and one for house?

I think three separate posts will work, one for each type of race (it will be a bit of work though . . .). Then people can concentrate on the races they’re interested in. Sad to say, but the Dems have a lock on my district in CA for at least another cycle.

I noticed there were no Libertarians or Greens on the ballot at all, this time. If they think they are going to do something without running any candidates, they are mistaken.

I think one big post would be more fun. Even if it is just a scrum of comments/results.

“We may even bring out the Nukes. (Do any longtime readers know what I’m talking about?)”

Please bring back the confetti. Or the Dancing Dino.

Arizona Governor elections suck. Apparently the closest thing we have to a conservative in this race is a RINO. Go figure.

I am a consummate pessimist. That way when things go wrong I won’t be surprised. My sentiments are with the person who said, “Nothing worries me more than someone saying there’s nothing to worry about”.

I thought that little comic strip might be relevant.