Obama 2008: Israel can keep its undivided capital of Jerusalem, if it likes it

Obama 2008: Israel can keep its undivided capital of Jerusalem, if it likes it 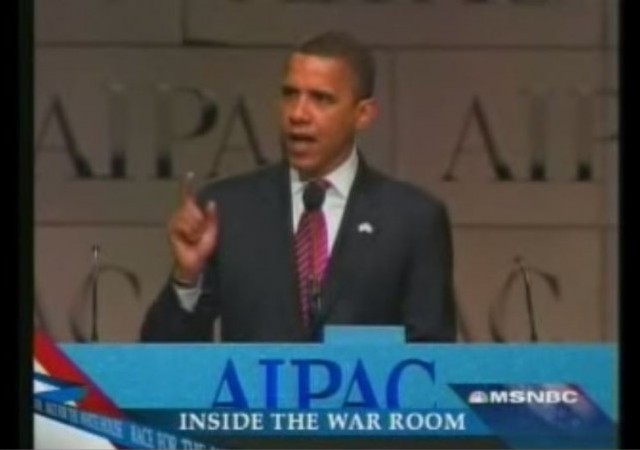 Yesterday was oral argument at the Supreme Court in a lawsuit over whether Congress had the power to designate Jerusalem as the Capital of Israel on passports.

The case is Zivotofsky v. Kerry, and the issue is a fight between Congress and the Executive Branch, Via Scotus Blog:

Issue: Whether a federal statute that directs the Secretary of State, on request, to record the birthplace of an American citizen born in Jerusalem as born in “Israel” on a Consular Report of Birth Abroad and on a United States passport is unconstitutional on the ground that the statute “impermissibly infringes on the President’s exercise of the recognition power reposing exclusively in him.”

Prof. Eugene Kontorovich points out that legally the issue is not the same as the political issue of recognition of Israeli sovereignty over all of Jerusalem.

Most observers of the oral argument believe it it will be a 5-4 split, most likely in favor of the Executive Branch. But oral arguments are not necessarily accurate predictors of ultimate outcome, so who knows.

Regardless of the legal technicalities, the media and public perception is that this is a political issue regarding Jerusalem, particularly in light of hostile and threatening statements made by the Obama administration over Israeli exercise of sovereignty over “East Jerusalem” (the part of Jerusalem illegally occupied by Jordan from 1949-1967).

Via Mirabelle from Israelly Cool:

Some of Obama’s biggest recent grievances in that relationship [between Obama and Netanyahu] seem to have been over Jews living in various neighborhoods in Jerusalem. In the past few weeks, Obama or his spokespeople have expressed their displeasure with Jews moving into homes they legally purchased in Silwan, planned construction of mixed Jewish and Arab housing in Givat Hamatos, or Monday’s announcement of homes in Har Homa and Ramat Shlomo. Rather than go on a lengthy rant about my complete and utter disappointment at my own President, I though we’d just take a trip in the Wayback Machine, to 2008 . . .

In 2008, Obama pledged that Israel could keep its undivided Capital of Jerusalem, if it likes it.

That was then. This is now:

The United States on Monday [November 3, 2014] condemned the Jerusalem District Planning and Construction Committee’s decision to promote a construction plan for hundreds of new housing units in the Ramat Shlomo neighborhood, beyond the Green Line.

“It is unfortunate that after the unequivocal and unanimous position last week of the international community, opposing construction in East Jerusalem, at this sensitive time the Israeli authorities chose to move forward,” said Jen Psaki, State Department Spokesman.

“We continue to engage at the highest level with the Israeli government to make our position absolutely clear – that we view settlement activity as illegitimate and that we unequivocally oppose unilateral steps that prejudge the future of Jerusalem.”

The decision “flies in the face of Israel’s statements about commitment to the two-state solution,” Psaki added.

Anybody who is not convinced by the evidence at this point is simply sealed to the bung of the Collective like a remora or a leach.

Jews who still support him are the typical Collectivists first types. They have no god but crass ideology.

Obama believes in a two statement solution. One that gets him elected or what he wants. And one that gives him thrills up his leg as he shouts “Yes, yes, yes, yessssss, that felt sooooo good.”.

Obama’s “promises” always come with an expiration date. Typically, that date is right after the next election…

Thanks so much for posting this. It’s pretty breathtaking. Obama really sounded convincing.

Exactly the same thing will happen with Hilary in 2016. I would like to see the candidates go on the record for support to the UN and pledge a reduction/elimination in US support and enabling of the UN and UNWRA. At a minimum, UNWRA should be abolished so there is only a single UN body for refugees.