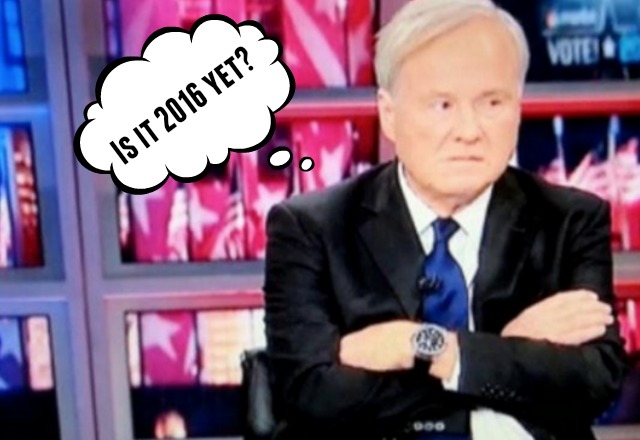 Desperate to find a silver lining in the 2014 Midterm shellacking, the media has come up with a new mantra: “The GOP’s victory is short lived.”

2016 is the GOP’s to lose, and I would never put it past the Republicans to snatch defeat from the jaws of victory; but to act as though a Republican loss of the Senate in 2016 is a forgone conclusion is premature at best.

Yes, the map will be different, and yes, the GOP has no policy agenda carved in stone, yet neither of these ensure defeat in 2016. The truth is very simple: no one knows what will happen in 2016. And yet…

“We were destroyed in the Midterms, what do we say?! What should we write?!”
“I know, let’s tell everyone that there’s no way Republicans can win again in 2016.”
“Brilliant!”

And then they got to work: 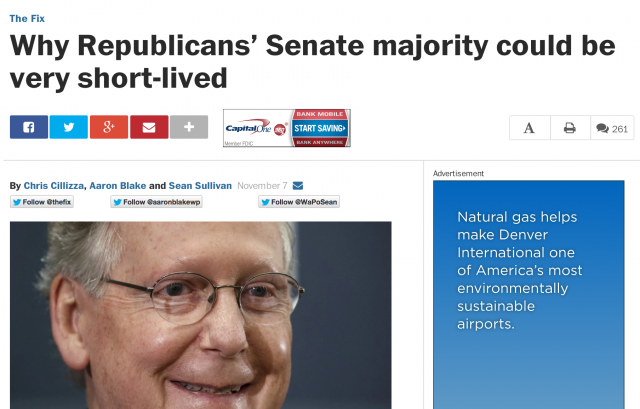 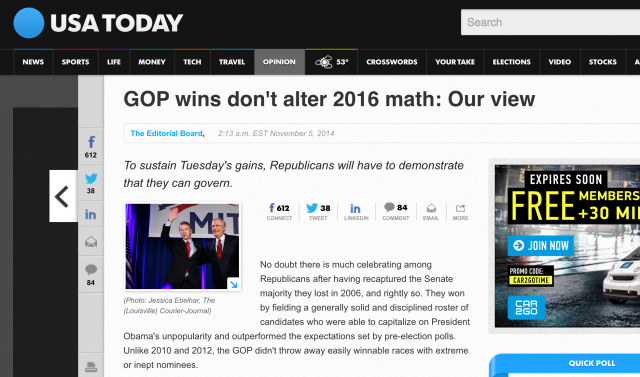 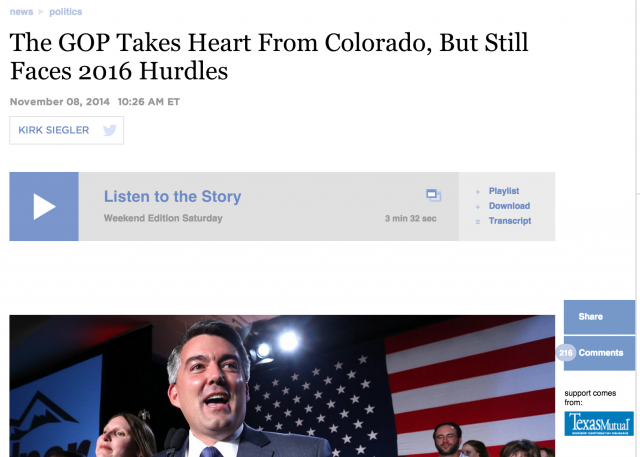 This following closely on the heels of “the election means that Republicans now have to work with Democrats to get Washington working again,” talking point. Both are BS.

“I would not start with the CFPB, though I hate the way it was set up. It offers up a big softball for Dems to demagog LIV.

But that’s a quibble.

Also, I would start with those 300 bills that supposedly exist. I’d try to have them ready for January, and send a bill a week to Obama. Start with the ones that have bipartisan support. Send one a week. (I know the Senate and the House will want to deliberate for months, but they should try to set up 3 months of weekly bills.)

Imagine what the media would have to report when every Monday another bill arrived on Obama’s desk.

THEN, when the public has seen reasonable bill after reasonable bill, is when you do your defund ACA or whatever.”
—Harun, a commenter on Questions&Observations

Which was a freaking brilliant suggestion in response to my posting of an excellent set of ideas from George Will…
http://www.washingtonpost.com/opinions/george-will-the-first-steps-republicans-should-take/2014/11/05/8c0c0fde-6529-11e4-bb14-4cfea1e742d5_story.html

TO WHICH…add the brilliant idea Rush proposed: send up every bill to Pres. ScamWOW with a cover letter and the polling showing the American people support it.

AND MAKE IT ALLLLLLLLLL PUBLIC…!!!

A hearty affirmation (more than a thumb’s up) to your comment, most especially the last line.

It’s time for a series of demonstrations from the House and Senate, and this is exactly how to do it.

I would call them demonstrations, too.

The left thinks they’ll get the same level of enthusiasm they got in 2008. I got news for ’em. Warren/Hillary isn’t going to send a thrill up anyone’s leg.

“Warren/Hillary isn’t going to send a thrill up anyone’s leg.”

The connection of Warren, Hillary, thrill, and leg in the same sentence has prompted associations in my mind that a thousand armies of radioactive nanobots could not scrub out of my brain in a million billion years. For that, I curse you.

Broke Gospher, Warren/Shrillary sends a shiver of terror up my spine. It would mean our country’s sunk if those shrews got elected.

Actually, they have a *little* bit of a point though

See, 2016 Senate elections will be a replay of the elections from 2010 – a huge Republican Wave. Some might remember the talk after 2010 – “Republicans fail to take advantage of wave to regain Senate” because “they picked bad candidates who couldn’t take out vulnerable Dems”

The 2016 breakdown is 10 Democrat seats are set for defending, 2 of them (Bennett, Col & Reid, NV) being vulnerable going in. Meanwhile the Republicans will be defending 24, with 8 expected to be competitive at this point. Those competitives include strong people like Rubio in Fla, Ayotte in New Hampshire, Portman in Ohio, as well as the ‘hope they can hold ons’ like Johnson in Wis and Toomey in Pen. There is, logically, a very good chance the Senate ends up in the 50/50 range – Per the math, like they say, Republicans will stand a fairly good chance to loose a few while having very few to pick up themselves; its just reality

The problem for Democrats comes two fold, however…

– 1) Dems will be finding their 2016 candidates from the current crop of State Legislators – a group of Democrats which has been devastated by 2 Republican waves to the point there is talk everywhere pointing out the Democrat “up and comers”/”next generation” is largely extinct.

So the candidates Dems were hoping would be there in 2016 to help them gain back in the House and Senate are just flat out gone. They need to completely start over in their quest to regain control. They have very few state incumbents left and only about a year to find replacements before the actual election cycle starts though. Oh, and this will likely be tried with the re-inflated corpse of Hillary “energizing” the base at the top of the ticket. Good luck with that (Plus anti-union Govs/State-Legs have taken over all over the place, almost certainly dramatically cutting into the amount of union money that will be available to Dems in 2016)

2018 will see 23 Democrats up for reelection, and only 8 Republicans. That includes no Republican seats that really stand out as being at risk at this time, but Democrats in states that just waved Red everywhere …and 2018 is an off-year election, which Dems constantly complain they cant get their base out to vote in.

2016 may or may not see Republicans have problems. Simple math says yes, as those articles indicate. Looking deeper it is probably a toss up if Dems can manage to rebuild very quickly – a big if. But one thing is for sure, come 2018, Dems are in a position for major pain. And with the House quite possibly being in Republican control for the next few Decades, Dems stand very little chance of holding much of any control for the foreseeable future.

After 2006/2008, Liberal talking-heads liked to talk about the end of the Republican party. Instead, it is their party the country may possibly be watching come to an end. And if the collapse of the Unions continues on its current path, there might be little chance to even begin to stop it (hence their painfully desperate attempt to gain an extreme stronghold in the Hispanic vote. Without it, they have near nothing moving forward)

Besides their dearth of candidates ready to make all those Senate races in 2016, there is an “X” factor the press and Democrats overlook, perhaps willfully.

That is this: Obama is far from done ruining their brand. Blanket amnesty for millions is opposed even by Latino citizens and Democrats. The economy won’t be robust, the workforce still will not have recovered to 2007 participation levels (although private capital investment will rebound if interest rates are allowed to rise).

ISIS isn’t going away, Putin wants more of Ukraine and perhaps other Baltic states, and the mad mullahs will get their nukes, courtesy of Obama.

Democrats better start trashing him hard now, else they will own all these losing policies in 2016.

Toomey is probably toast, and Johnson may have a tough road to defend his seat in a Presidential year in the Great Lakes (unless unions desert Democrats over amnesty, which threatens their jobs and income).

But other than that, the GOP seats seem secure, but lots of Democrats will be vulnerable, too. So the worst case for Republicans in ’16 seems a net -2, maybe not even that.

Unfortunately 2016 isn’t that cut and dry

Mark Kirk, R, Illinois is a goner in a presidential election

Toomey, R, Pennsylvania, as we agree, is quite likely toast

Johnson, R, Wisconsin will have a hard time but may pull it off.

Dan Coats, R, Indiana could also end up a victim of a Presidential election if Dems are able to build momentum for the main office

There is also David Vitters in Louisiana, who has announced he will be running for the departing Jindal’s Gov spot in 2015. That leaves the Senate race with no announced from either side.

Add that to Rubio in a competitive Fla, Ayotte in Blue New Hampshire, Portman in competitive Ohio, Rand Paul who may just have to vacate his Senate seat to run for President/VP from Kentucky, and Chuck Grassley in Iowa who is going to have to retire sometime (where the voters may just choose for him when it is time to go)… Oh, and then there is a certain very unpopular McCain who will be running again in Arz.

On the flip, Republicans realistically only have 2 seats to full out target – Bennet in Col and Reid in NV.

Otherwise maybe another run is made at loony Murray in blue Washington? The only other Dems up are in California, Connecticut, Hawaii, Maryland, New York, Oregon and Vermont. That is not a favorable set of states for Republicans to make waves in, and each Dem incumbent is fairly popular (at least in the area)

I can easily see anything from -1 Rep (lose Pen & Ill, pick up Col) to -8 Rep if things go great for Dems

As far as this:
“Democrats better start trashing him hard now, else they will own all these losing policies in 2016.”

…that’s the beauty of it all, they are between Barack and a hard place!

How well does any Dem candidate think they are going to do with the Black vote if their entire platform starts with “Obama was horrible…,” you know?

I mean, how well did that work for Alice In Blunderland-Grimes, who was not even going *that* hard against Obama, but doing everything possible to brag up her self-identified “Clinton-Democrat” tag? She lost by what, 17% to one of the most unpopular politicians in the country?

A Democrat anti-Obama stance is not a winning one; but neither is a pro-Obama stance! Ahh the beauty of it

AP, Reuters, the WP, and the two Times are also busy writing articles to create friction between the mainstream GOP and Tea Party. They will continue using these and other themes to see which one works best to produce in-fighting or discouragement among party members. After all, it’s their job.
http://mobile.nytimes.com/2014/11/09/us/politics/before-battling-democrats-gop-is-fighting-itself-.html?_r=3

Yes, the Senate is the GOP ‘establishment’s to lose — if we allow them the opportunity to be in charge. Key word here: ‘we.’

This is OUR party. WE fire and hire.

It’s time to do some firing.