Media attempts to make the story about Republicans. 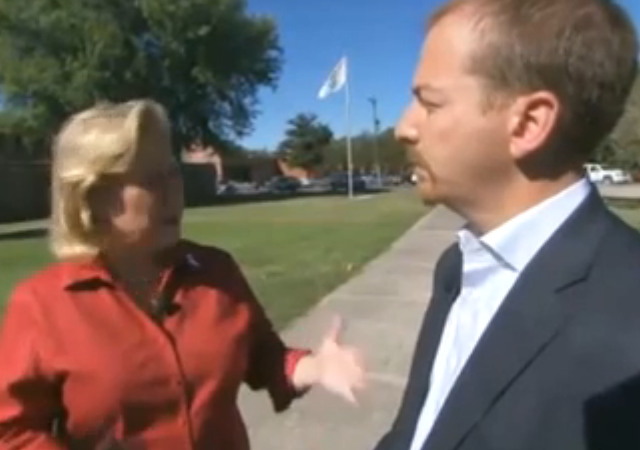 Democratic Senator Mary Landrieu of Louisiana made some stunning comments about her constituents this week. While speaking to NBC’s Chuck Todd, she implied that if she loses her bid for reelection next week, it could be due to racism and sexism.

The exchange was captured on video:

Her remarks were certainly newsworthy but some people in the media saw a different angle to the story which was much more important; the Republican reaction. This happens quite often, as noted by Jim Treacher:

The article in Treacher’s tweet is by Melinda Deslatte of the Associated Press:

Republicans are calling on Democratic Sen. Mary Landrieu to apologize after she suggested Thursday that President Barack Obama’s deep unpopularity in the South is partly tied to race.

In an interview with NBC News on Thursday, Landrieu was quoted as saying that the South “has not always been the friendliest place for African-Americans.”

Isn’t it strange how the very first word in the AP article is “Republicans?”

Here’s Jesse Byrnes of The Hill:

Gov. Bobby Jindal and Landrieu’s GOP opponent in her tough reelection race, Rep. Bill Cassidy (R-La.), both pounced on comments she made to NBC’s Chuck Todd that the South “has not always been the friendliest place for African-Americans.”

Notice the first statement. Republicans are slamming her for comments they say…

There’s no need to qualify Landrieu’s remarks with what Republicans say. She made the statement. She said the words and we heard them but somehow the story is all about how Republicans reacted to it.

Once you notice this not-so-subtle trend in liberal media, you’ll see it again and again.

As Jim Treacher said, the story is never about the Democrat.

To my knowledge there is only one white person keeping Barracula out of Louisiana.

That would be Miss Piggy Landrieu. Odd, huh…???

I can certainly think of an instance when at least one southerner was not nice to blacks. Democrat governor Kathleen Blanco did as much as she could to drown and displace the parasitic blacks living in the flood zone wards of NOLA. Those who didn’t drown or get killed by predatory blacks were driven out and dumped in next-door red state, TX.

Oh, is that also Senator Landrieu’s state? Why yes, it is.

I wonder how much stolen taxpayer money obola dumped on Landrieu’s campaign coffer as a reward for saying that.

“Oh, is that also Senator Landrieu’s state? Why yes, it is.”

JackRussellTerrierist: I can certainly think of an instance when at least one southerner was not nice to blacks.

Um, seriously? You do realize that Louisiana was a slave state, then a Jim Crow state, and resisted integration when so ordered by the courts.

New Orleans, 1960: “close ranks against the common enemy and fellow travelers who would force unmoral racial integration upon our children to destroy their education … and who would destroy white civilization so that in the end our nation would be easy prey to the Communist vultures.”

Yep. Those Deemocrat racists had to dragged kicking and screaming into a more enlightened present.

And it’s a damn shame you are still stuck back in the 60s, but it’s your choice. The rest of us have moved on….

Ragspierre: Those Deemocrat {sic} racists had to dragged kicking and screaming into a more enlightened present.

Sure. It took a federal effort to end segregation in Louisiana, which was primarily supported by Louisiana Democrats and Dixiecrats.

Glad you agree with our statement that it should be possible to name more than just one “instance when at least one southerner was not nice to blacks.”

Also, Zachie, Jim Crow was never limited to the South, and there are NO places in America…and especially in the South…as segregated as New York City right now.

Sure, but the question concerned racial animosity.

Ragspierre: Jim Crow was never limited to the South

“Jim Crow law, in U.S. history, any of the laws that enforced racial segregation in the South between the end of the formal Reconstruction period in 1877 and the beginning of a strong civil rights movement in the 1950s.”
http://www.britannica.com/EBchecked/topic/303897/Jim-Crow-law

Yeah, Zachie, any weak reed in support of your bullshit.

Look up the anti-miscegenation laws, stupid.

Ragspierre: Look up the anti-miscegenation laws

As we said, Jim Crow was *primarily* a southern phenomenon. Though there were race laws in other states, they were less intrusive overall, and were often repealed sooner than in the South.

Glad you agree with the plain facts about the South.

And isn’t it a shame that New York CIty and other meccas of the Collective are so shamefully segregated now?

And just so we’re clear that this isn’t ancient history: about seventy million Americans, including one million Louisianans are alive today who lived during Jim Crow.

A lot of us fought Jim Crow, stupid.

A MUCH larger portion of Americans were alive to see the Soviet Union’s horrors.

And why are you so dedicated to bringing those to America?

Ragspierre: A lot of us fought Jim Crow

Sure. However, Jim Crow had an eighty year history in Louisiana before the public was sufficiently galvanized to bring about change.

Ragspierre: A MUCH larger portion of Americans were alive to see the Soviet Union’s horrors.

At least alive during the Soviet period. The worst abuses occurred in the 1930s, though political oppression continued.

And you’d love to see it here, you lying SOS.

Ragspierre: And you’d love to see it here

Um, no. Not only are markets essential for economic growth, but individual liberties are essential for people to reach their human potential. Nor do the ends justify the means, as Communism has it, as it is the means which often define the ends.

Sounds like l’il Zach just got his AA degree in Anger Studies.

This and other media tactics work. They work because the ‘pubs are a bunch of gutless, spineless wonders, scared to death of the media saying something bad about them, which they do no matter the subject nor whom is in the wrong.

There is another necessary component to ‘rat success in this area, and that is the mindless, gross ignorance of the American people. That number is growing, with both natural born citizens and imported underclasses having no exposure to the founding principles of this country. They see only what’s before them as they grow up or enter the country, which are entitlements to freebies, extra privileges and PC excuses that are exponentially draining resources and replacing domestic peace with violence. They have no knowledge nor interest in how the freedoms preserved by the founders grew this once glorious country into the greatest economic powerhouse and the best way of life the world has ever known.

We, the middle class, are the enemy of elitists and the ne’er-do-wells, the left’s constituencies. We are the target. With the immeasurably helpful deceit and propaganda from the media, the left are destroying us physically and financially while slashing our traditional culture and values. But we just stand by whining about voter fraud and separated issues.

Oh this is gold.

Whoops. Meant for it to be this link. Sorry !

At this point, minds are pretty much made up. Anyone who might be offended by Mary insulting her own state and region (well, she really lives in DC in a mansion with her husband, real estate broker to lobbyists and political donors who can’t pay her off directly) was already against her.

Landrieu’s last hope is to boost turnout among natural Democratic constituencies: blacks; young, dumb, single women; social justice warriors. She needs to remind them that only she and her Washington cocktail soirees are keeping the KKK from taking over Louisiana.

The real insult to Louisiana is that they elected this crook three times already.

Of course later in the interview Mary doubles down and says that we are sexist as well. I guess Gov Kathleen Blanco and Senator Mary Landrieu don’t count for much.