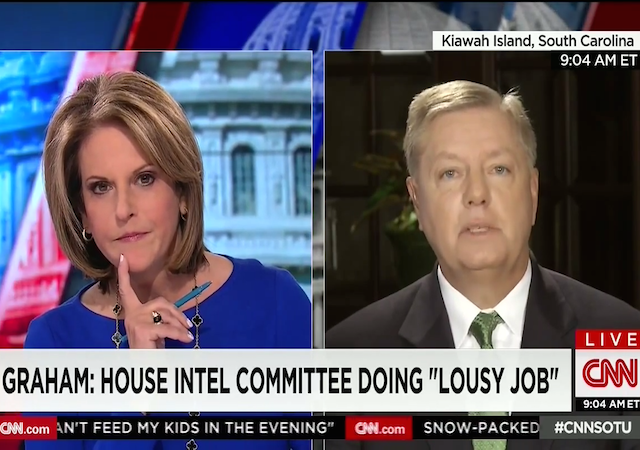 Senator Lindsey Graham (R-SC) let loose on Fox News this Sunday over the recently-released House Committee report some are saying clears the Obama Administration of any wrongdoing connected to the terrorist attacks against the American Embassy in Benghazi.

Anybody who has followed Benghazi at all knows that the CIA deputy director did not come forward to tell Congress what role he played in changing the talking points, and the only way we knew he was involved is when he told a representative at the White House, ‘I’m going to do a hard review of this, a hard rewrite.’

If ever there were a situation that called for a “there’s no way in HELL” response to a report that mitigates accusations of wrongdoing, this is it. I tend to give he benefit of the doubt to investigative committee reports, but my gut reaction when someone tells me no cover up occurred in the wake of the murder of an Ambassador?

There’s no way in Hell.

There are times when Lyndsey Graham shines and this is one of them.

I am an outsider to this whole situation, and I am shocked that this report clears Susan Rice and the White House. They lied….. what more can be said.

Amy — Looks a lot more like CNN than Fox News…

Glad I’m not the only one who thought this and still had questions. Main one being, this reprt hasn’t said who changed the talking point to the video being the culprit? And other questions like WHY did Hilary say no to more security; and nothing about the arms supplying? Incomplete…

Thing to keep in mind…

Since at least WWII, our State and “intelligence community” have always had very active factions who were Collectivists. That’s no great revelation, but people DO forget.

Even the DOD has very active Collectivist factions.

So, when you are told that “CIA says” or “State reports” or even “the Defense Department claims”, take it with a HUGE grain of salt. The reporter may well be reporting what the factions he/she has contacts with have told him/her. And that information can be VERY partisan.

BTW, Molly Hemingway has some very good thoughts on this report.

The majority Republican members of the House Permanent Select Committee on Intelligence, who outnumber Democrats 11 to 9, are as follows:

I applaud them, and the minority members too, for producing an honest evaluation of the evidence. It appears they didn’t allow partisan politics to distort their findings. In that, they did service for the common good of the country.

blue skies, rainbows, unicorns everywhere. Boy are you naïve and you have not been keeping up.

In this lay usage, ‘honest evaluation’ means ‘agreed with my beliefs’.

Surprising Goober didn’t bolt out of town with McConnell and Boehner after Obama committed treason by ‘declaring’ amnesty.

Behghazi will be ripe for pickings after the new Senate session. Goober had nothing to say about the Constitutional crisis that began?

But then, Goober was always a backstabber on the issue of immigration, much like his fellow RINO hack, John McCain.

What a basket full of basket cases. And we tolerate them.

There’s more corruption in our federal government than I first thought.

That Federalist article was good … but the simple thing I read was that they knew it was a terrorist attack at the start, but the WH (or someone right there, after admonition) changed the report, and fabricated the lie about that video, indicating guilty knowledge.

Hillary then “got ahead of the story” by announcing “that video” along with the death of a state department official. So they never sent in help, but they worked on their big lie.

That’s what an Obama war room is for. They followed up at the funerals promising to get that video guy, which they were given national coverage for, dragging the nobody out of his house for some parole violation.

“About 10 p.m., Mrs. Clinton issued a statement confirming that one State Department official had been killed in the attack on the U.S. consulate in Benghazi. Her statement made reference to the anti-Muslim video.”
Cover story was out even before they even revealed it was Stevens.
http://www.washingtontimes.com/news/2014/may/7/obamas-actions-on-night-of-benghazi-attack-under-s/?page=all

I knew immediately that this was an attack by terrorists. And I’m nobody who gets first-hand, real-time video feeds from the incident.

Nor can I monitor the chatter from the terrorists or the guys in the gun-fight.

I don’t impute perfect information to anybody. But I DO hold people with VERY HIGH LEVEL information accountable.