Leftists at Salon Welcome Veterans Day in Their Own Predictable Way

Leftists at Salon Welcome Veterans Day in Their Own Predictable Way 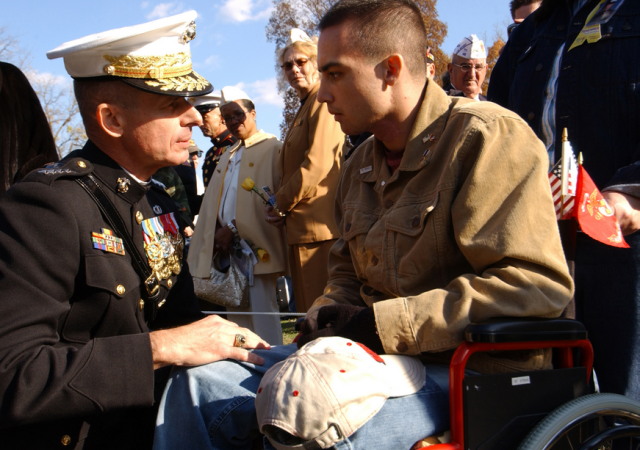 Veterans Day is tomorrow. It’s a chance to honor and give thanks to people who have served in America’s armed forces. Most Americans appreciate the sacrifice these people make when they volunteer to join the military, putting their lives on the line to defend our freedoms.

The far left folks at Salon are not most people.

They have a slightly (ahem) different interpretation of that sacrifice and that’s why they published this piece by David Masciotra:

Put a man in uniform, preferably a white man, give him a gun, and Americans will worship him. It is a particularly childish trait, of a childlike culture, that insists on anointing all active military members and police officers as “heroes.” The rhetorical sloppiness and intellectual shallowness of affixing such a reverent label to everyone in the military or law enforcement betrays a frightening cultural streak of nationalism, chauvinism, authoritarianism and totalitarianism, but it also makes honest and serious conversations necessary for the maintenance and enhancement of a fragile democracy nearly impossible.

It has become impossible to go a week without reading a story about police brutality, abuse of power and misuse of authority. Michael Brown’s murder represents the tip of a body pile, and in just the past month, several videos have emerged of police assaulting people, including pregnant women, for reasons justifiable only to the insane.

It is equally challenging for anyone reasonable, and not drowning in the syrup of patriotic sentimentality, to stop saluting, and look at the servicemen of the American military with criticism and skepticism.

Jazz Shaw of Hot Air notes that this isn’t the first time we’ve seen this sentiment from our liberal friends:

Perhaps one of the only shocking things about finding this article on the site is that it wasn’t a guest editorial from Chris Hayes. The MSNBC host expressed very similar sentiments back in April of 2012, though in a rather more timid way and he later had to backpedal and kind of apologize for it. But the very existence of opinionators such as these who can find a publicly accessible forum is precisely the reason that we would be making a grave mistake to just write them off as a couple of self-serving kooks. This evil and completely unamerican type of sentiment is more prevalent in our society than many of us would care to imagine.

The sad part of having to defend against such erudite commentary from our liberal betters is that the job is made all the harder by the media, who gleefully play up each and every example they can find to support the theory.

The best way to recognize Veterans Day is to thank a vet. Just walk up to a veteran, shake their hand and thank them for their service.

Let the fools at Salon defend their own freedoms.

A couple of generations stood in the breach between WWII and now, many of them pure volunteers.

Since WWII, they (or I may modestly say we) have, in fact, kept billions of people as free as their respective governments would allow, and liberated tens of millions more.

No mean accomplishment, in the long, dark history of the world.

In fact, the story of the U.S. military and its allies in arms has been the most amazing, stellar, and astoundingly aberrational story I can think of in history. We have been what the Collective thinks they COULD be, but certainly never CAN.

This is sad. My own late great grandfather fought in world war II and I have an uncle that put in 24 years of service with the USAF. I live my life hoping I can be at least half the man they are.

I don’t understand where something like this comes from.

The pacifist argument is stillborn – without soldiers there is no safe place to be a pacifist. Their very existence depends on security supplied by military defense.

Well, I can think of one safe place.

As the old joke goes, “People are just dying to get in there”.

Without the USA military, the “Peoples Militia” would excise its power over us malcontent Constitutionalists; ok, ok, yep, call it by its proper designation: “SEIU Troopers”.

Oh please, let the be the start of the left’s new strategy!

the author of that deleted his twitter account also.
when we were strong we didn’t have 911, when we were weaker we did.
the same terrorist stuff I/we dealt with overseas in the 80’s (as in the countries involved) are the same now.
the intelligence some of us compiled may have helped prevent small battles from escalating into large battles, no way of telling really.

What’s funny…well, one of the things that’s funny…about the Salon piece is its juxtaposition in time with the “fall” of the Berlin Wall. As though that happened because of faulty design or poor up-keep.

Again, tens of millions of people were liberated from a “Collectivist paradise”, and that SOLELY because of the vision and strength of a great president, and the men and women under arms who stood at his command.

Gotta give Salon credit for one thing: they’re consistent. Consistently wrong, that is.

In the 90’s the highlight of my work week was Camille Paglia column at Salon. That’s back when they were relevant.

Racist much there Salon?

“It is a particularly childish trait, of a childlike culture”

Kind of like name calling at anyone who disagree’s with you?

“but it also makes honest and serious conversations necessary for the maintenance and enhancement of a fragile democracy nearly impossible.”

First point, why doe it make discussion harder? There are plenty of patriots who are critical of how our Military is or isn’t employed these days, me being one of them.

I also wonder what “fragile democracy” is being referred to here. It can’t be the USA because we are a constitutional republic not a democracy. Oh, well maybe its that the writer of the article isn’t smart enough to realize that, that could be it.

A speculation that is looking more and more unlikely, considering the evidence available.

“represents the tip of a body pile”

Yes, over the top rhetoric will win the argument for you, its just as effective as name calling.

“It is equally challenging for anyone reasonable, and not drowning in the syrup of patriotic sentimentality, to stop saluting, and look at the servicemen of the American military with criticism and skepticism.”

This is the most dishonest, underhanded, evil and ignorant argument and could only be made by someone without the courage to actually put on a uniform and serve. They want to blame the soldiers for the actions of the military as a whole and it is nothing more than evil rhetoric.

Oh, wait, Salon’s conscientious objection is not about human life or dignity. I wonder what motivates their protests.

Funny how so many people that support our troops think Col. West and Gen. James are great men. Unlike Colin Powell, Gen. James got all four of his stars without affirmative action.
On a side note. Ran into Gen. James at Trader Jon’s one night(I apologized), he would have gotten my respect without the four stars.

I remember being in uniform back in the late 60’s and being called a “baby killer” by pro-abortion liberal feminists.

I probably missed the part where these same “equal rights” babes were demanding to be drafted just like men were to fight a war their liberal god Kennedy got us into and his Great Society side kick Johnson kept us in.

Globalists speak fluent treason. Some dare call it. This also confirms an observation last Wednesday that, learning they cannot trust voters to enslave themselves and offer Globalists obeisance, Globalists are scrubbing about to find a way to effect a coup d’etat. They are right to face off the military first and foremost. US Armed Forces and US Army in particular (land-controlling force) are the core of the nation, those without whom the nation exists not or exist not as sovereign. Last Wednesday morning there was subdued jubilation at the Pentagon. Globalists hate the very idea of national sovereignty.

Wouldn’t ya just luv to have the chance to walk up to this schmuck and spit in his face? I know I would.

What sort of worship do liberals do?
a) Environmental worship
b) Socialism worship
c) radical egalitarian worship
d) Reverse Racism worship
e) Something else

RE: ““Forced troop worship and compulsory patriotism must end.” But enough on Obama and his Zombie Troops………

All this forced veteran worship is taking away from the true heroes: liberal reporters and columnists who risk their credibility every day cheerleading what they all agree with at their evening cocktail parties. What did a veteran really ever do for free speech except those that opposed war? Nothing. What have they done for social justice? Nothing. How dare they take up the time of an angry English major from an Ivy League school who experimented with bisexuality for the purposes of a column on sexual liberation in a student newspaper that now is concerned with paycheck inequality.

Let’s take up a collection to lease a jet and make a air drop of the entire Salon staff into downtown Mosul at noon. I’m not settled on Mosul, but it should be some location where the American military forces can watch it live and tape the display of the utter power of pacifism in the face of existential threat. We could offer the tape to the Armed Forces Network. Probably be in reruns for decades, like Rat Patrol or F Troop.