“You cannot simply issue decrees. We don’t rule by decree in this country.” 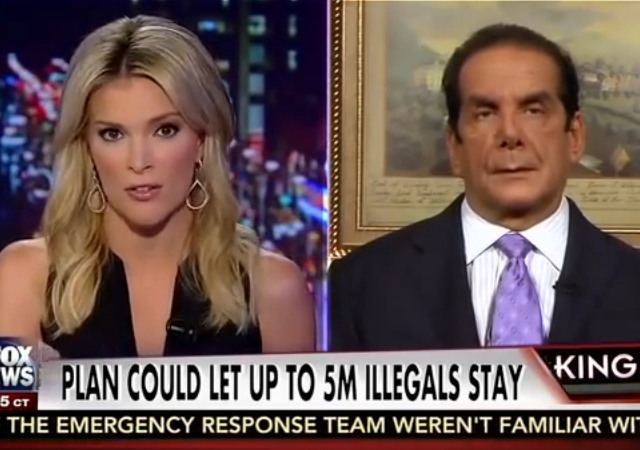 Kelly, who is a lawyer, pointed out that we’re entering “uncharted waters” and that even Reagan’s famous amnesty was done with congress. Krauthammer concurred and pointed out that it’s an impeachable offense.

Krauthammer said that prosecutorial discretion, which Obama is invoking to justify his executive action, is only meant for extreme cases in which one or two individuals are prevented from being deported.

“I believe it is an impeachable offense,” Krauthammer told Fox News host Megyn Kelly on Thursday.

Senator Ted Cruz has also been outspoken about Obama’s plan.

Mario Trujillo of The Hill reported:

Cruz: Obama immigration action would be ‘defiant of voters’

“I hope he does not do so. If he does, it would be wrong, it would be unconstitutional, and it would be angry and defiant of voters,” Cruz said Friday, following a speech in Austin outlining his position on a number of issues related to technology policy.

The Texas senator said if Obama goes through with the plan, “Congress will do everything humanly possible to stop them.” He declined to “game play” what tactics Republicans might use.

Cruz said he might even agree with some of the policy changes that Obama makes, including freeing up more work visas for the technology community. He noted that he has introduced a bill to expand the cap on high-tech visas.

It’s almost like Obama doesn’t care about the will of the voting public. Almost.

It’s interesting to note that impeachment has gone from a taboo to a mainstream subject for discussion.

What a difference an election makes, huh?

Why, it’s kinda like a spell has been broken, innit?

I note in passing that Krauthammer himself is deeply opposed to impeachment on the grounds it would be a political disaster, however justified it might be.

Which is a rather stupid position to take.

Obama is ready to literally shred the Constitution and piss on the remains.

The President DOES NOT GET TO DECIDE WHAT LAWS HE WANTS TO FOLLOW.

The President ignoring the law is ILLEGAL.

Not according to Mitch McConnell. He won’t even defund in order to stop Obama.

Link, please. That is not what I’ve read.

Last year, he said defunding was “not conservative policy” and “could not and would not work.”

“We’re going to pass spending bills, and they’re going to have a lot of restrictions on the activities of the bureaucracy,” McConnell said. “Thats something he won’t like, but that will be done. I guarantee it.”

Now that was published on August 29. McConnell may or may not be holding the same opinion. Who knows where he stands right now?

But he’s not alone. He may be the leader, by some definitions, but there are others who will lead, too.

Plus, we can infuse a little “spine stiffener” in him.

Given that Obama refuses to enforce immigration law, congress should pass a simple bill that does not require enforcement: exclude from citizenship anyone who is legally here solely as a result of executive action. Let Obama veto it and see how Democrats vote on the override.

A second bill could be to exclude from citizenship any non-citizen who has ever voted in a federal election.

A clause in said bill should note that no “derivative” citizenship will be bestowed further EVER as well ( no more “born on U.S. soil” citizenship to anyone illegally and n the country or not legally permenancy residing here.

That’s impossible. Anyone born in the USA is automatically a ctizen, and Congress has no authority to say otherwise. What you’re proposing is even more lawless than what you’re accusing 0bama of.

Citizenship is a matter of law, not geography.

And the law that defines US citizenship is the constitution, which Congress can’t amend.

When dealing with Obama, it is important to keep bills focused. Such a bill, if offered, should be done separately. At the very least, it would give Democrats ample cover for voting against it.

If your suggestion became law, the Supreme Court would likely rule that it violated the 14th Amendment.

Not “likely”. Definitely. But it’s not a matter of what the Supreme Court would say; Congressmen swear their own oaths to uphold the constitution, and passing such a bill would make them oathbreakers.

The states need to step up and stop this. Nobody in the federal government, with the possible exception of Cruz and Sessions, has the b*lls — and those two can’t do it alone.

The state governors (as many as will cooperate) should get together and announce that their states will not recognize the legal validity of any federal residency and/or work permits issued pursuant to an unconstitutional amnesty EO. Obama’s action will burden state taxpayers to the tune of billions of dollars a year, as newly-legalized illegal aliens become eligible to apply for all sorts of taxpayer-funded benefits, and take jobs away from legal residents. Border states will see huge inflows of new illegal aliens, and the increased crime that inevitably comes along with them, as more foreigners illegally enter the U.S. to try to take advantage of this, or get in on the next, mass amnesty.

Governors have a duty and responsibility to protect their states’ citizens from the foreseeable — and substantial — adverse consequences of Obama’s lawlessness. They need to act forcefully. If Obama wants to provoke a constitutional crisis — and it’s obvious that he does — then the states should respond appropriately.

“It’s almost like Obama doesn’t care about the will of the voting public.”

Uh… In case you have not noticed, Obama is a “lame duck”, ineligible for re-election. That makes the situation all the more dangerous, as now all he needs to worry about are post-election corporate board of directors appointments, speaking fees and book earnings. Do you really think that he is concerned with the future success of the Democratic Party?

Note that Krauthammer has, on every single occasion where he has stated an amnesty by EO is an impeachable offense AFAIK followed that by pointing out it would be insane to do it, and that it or a shutdown is what Obama is trying to provoke.

Assuming Cassidy wins in LA, we will have 54 Republican Senators. That means we need 13 Democrats to vote to convict. Ain’t gonna happen and only an idiot believes it would. They depend upon black votes or they cannot win. And so they wouldn’t vote to convict Obama if he killed a baby on live TV, cooked it on a burning American flag, ate it, then defecated and wiped his butt with the Constitution.

Been there, done that with Clinton in the ’90s. Got the tee shirt. Turn the page.

Sure, Obama deserves it, but it ain’t gonna happen and it is counterproductive to try. Don’t complain to Republicans; it is Democrats AND the citizenry which won’t tolerate justice for him.

Exactly. Without 67 votes to convict, impeachment would have no effect. He would survive and thrive on an impeachment without a conviction, just like Clinton did. He’d parade his “acquittal” as if it were a vindication and a brand-new mandate.

The GOP has bandied about the idea of lawsuits. What will they do when His Hopiness defies the courts? “Mr. Chief Justice Roberts has rendered his opinion. Now let him enforce it.”

We do not have a cabal of senators with daggers under their togas.

We have a Dictator. Face it. Survive it.

If Hitlery or another Democrat is elected in 2016, prepare for a Civil War that will make the last one look like a Sunday school picnic. Is yours dry?