The Iran Nuke Talks Get Extended, Iran Gets Sanctions Relief and More Enrichment 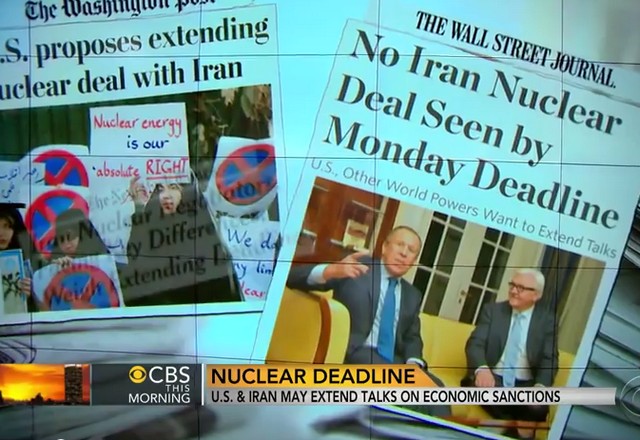 It’s interesting to see headlines that the P5+1 talks in Vienna about Iran’s nuclear program were called a failure.

On one very important level they were a success. No there was no agreement on a long term deal to roll back Iran’s nuclear program. But there was an agreement to extend the Joint Plan of Action allowing Iran to keep its nuclear infrastructure in place and receive up to seven more months of sanctions relief.

In other words for Iran, the negotiations were a tremendous success.

After negotiators failed Monday for the second time this year to meet a deadline for a deal, diplomats said they needed until the end of June 2015 to finalize the terms. They agreed to roll over an interim agreement signed last year that caps some of Iran’s nuclear work in exchange for an easing of Western economic sanctions.

What’s important to remember is that a significant portion of Iran’s isolation is the result of having violated the terms of Nuclear Nonproliferation Treat (NPT) leading to six U.N. Security Council resolutions, which together call on Iran to suspend uranium enrichment, ban it from exporting arms and from developing ballistic missiles. Any agreement that doesn’t reinforce these restrictions is a win for Iran.

Yes reports will tell you that last year’s Joint Plan of Action (JPA) forced Iran to eliminate its stock of 20% enriched uranium, but that is an easily reversible step. Iran still has approximately 10,000 centrifuges enriching uranium (out of 19,000 installed centrifuges.) Iran has not dismantled a single centrifuge. Iran has stopped building its Arak heavy water reactor but it hasn’t dismantled that either (or converted it to a light water reactor.) A heavy water reactor can produce plutonium, an alternative fuel to enriched uranium for a nuclear bomb. The JPA also didn’t force Iran to scrap its ballistic missile program . Ballistic missiles are capable of carrying a nuclear device (and as Prime Minister Benjamin Netanyahu pointed out on Sunday, intercontinental ballistic missiles (ICBM’s) could reach Europe or the United States.) The other day Iran boasted that it had given Hezbollah ballistic missiles that could reach all of Israel. (This is also a violation of the resolution forbidding Iran from exporting arms.)

Frustrations were visible on both sides. American officials said they remained hopeful a deal could still be worked out, But they worried that Iran’s negotiating team, and Iran’s president, Hassan Rouhani, who came to office on the promise of obtaining a nuclear deal, did not seem to have the latitude to make the kind of political decisions necessary — and they could not see how that would change.

Mr. Rouhani, for his part, went on national television with a mixed message of reassurance and defiance, telling Iranians that eventually there would be a deal that ended sanction, but also casting the outcome in a victory narrative, saying “the centrifuges are spinning and will never stop.”

But the fundamental problem remained: Iran’s supreme leader, Ayatollah Ali Khamenei, has yet to signal that he is prepared to make the kind of far-reaching cuts in Iran’s enrichment capability that would be required to seal an accord. And it is unclear that his view will change before a March 1 deadline for reaching a political agreement, the first phase in the seven-month extension.

And to hold out hope that Khamenei will allow any deal that brings Iran into compliance with its NPT obligations is delusional. But I think it’s important to see some of the comments made by Iran’s foreign minister and lead nuclear negotiator, Mohammad Javad Zarif, after the talks. Here’s Rosie Gray reporting at Buzzfeed:

“We believe that the right of Iran to have a peaceful nuclear program including enrichment is enshrined in the NPT [Non-Proliferation Treaty] which does not require anybody’s recognition,” he said. “The right is there. What is important is for Iran to be able to implement that right, to exercise that right without the threat of sanctions and pressures which in our view are illegal, but which unfortunately have been imposed on the Iranian people for the past many years.”
“So the object of this discussion is to have an Iranian enrichment program and at the same time remove international restrictions and pressures,” he said. “I’m confident that any final deal will have a serious and not a token Iranian enrichment program coupled with removal of sanctions. This is the objective that we’re working on and this is the objective we will achieve.”

The NPT mentions no explicit right to enrich uranium. But the NPT comes with obligations that Iran has consistently flouted. Zarif’s victory speech is very clear in expressing the Iranian view. Iran is looking for approval to continue to violate international law and to do so without punishment.

While Secretary of State John Kerry said that Iran kept its obligations dictated by the JPA, the truth isn’t so simple. The JPA called on Iran to cooperate fully with the International Atomic Energy Agency (IAEA), which it still has not done. It also tested a new generation centrifuge. (Something it stopped doing after it was warned to stop.) And it kept a higher than allowed stockpile of 3.5% low enriched uranium until very recently.

Kerry said “the United States and our partners have earned the benefit of the doubt at this point.” But read Zarif’s gloating. He’s celebrating because he got everything he wanted. Iran continues to violate international law and is proud of it. That’s all the reason to have our doubts about these negotiations reinforced.

Everything going just as Obama wants for his bossum buddies.

IFFFFFF Iran does NOT develop a nuclear weapon, it will be because the Israelis stopped them.

There is nothing to indicate that Pres. ScamWOW is really worried about this, or up to dealing with any of America’s enemies in America’s interests. But a lot to the contrary.