Iowa and Colorado – Signs of the Democratic Apocalypse

Iowa and Colorado – Signs of the Democratic Apocalypse

Turnout in Colorado, Iowa proves what a difference a little GOTV makes. 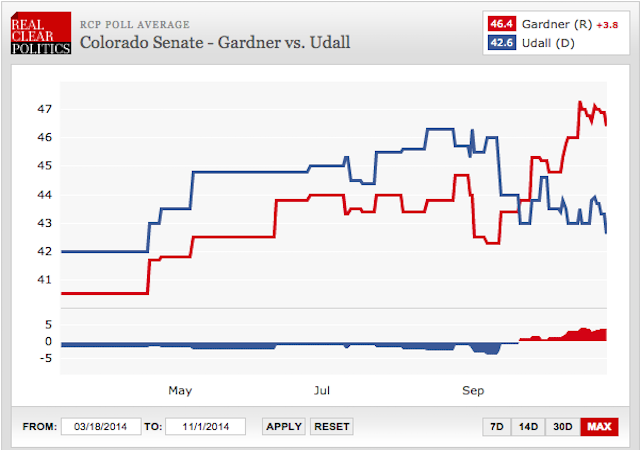 Candidates still have plenty of time to get out the vote before Tuesday, but an eleventh hour report released by the Colorado Secretary of State has put Democrats on notice, and upped the pressure on Republicans to maintain their momentum heading into election day.

Via the Associated Press:

A report from the Secretary of State on Friday showed that 104,000 more Republicans than Democrats had cast their ballots as the state conducts its first major mail-in election.
…
Republicans usually lead in early returns in Colorado but rarely by such hefty margins. Democrats and some observers expect that lead to shrink by Election Day.

But more than half the ballots are in and the filing suggests how difficult it might be for Democrats such as Sen Mark Udall to survive a year in which Republicans are highly motivated.

In a state where a high profile Senate race has come out to a toss up, a 9 point edge with over half of all eligible ballots already in the hopper is no guarantee of success, but it’s also not insignificant.

The Real Clear Politics Average has once-trailing Republican Senate Candidate Cory Gardner up 3.8 points over Democrat incumbent Mark Udall. This represents an almost mirror flip on the numbers since mid-September; a September 15 poll had Udall up 3.7 points, but by September 26, Gardner had closed the gap and gained a point over Udall.

Colorado Republicans aren’t breathing yet, though, because the gubernatorial race is much, much closer, with Republican Bob Beauprez enjoying (suffering through?) just a 0.3 point lead over Democrat incumbent John Hickenlooper.

As Ed Morrissey at Hot Air notes, Republicans are dominating with demographics generally considered a sure thing for Democrats:

More than 60 percent of those whose votes have been sent are 55 or older, a segment that grew from 45 percent in the midterm election in 2010.

Democrats have been trying to turn out voters who usually skip lower-interest midterms. But it’s Republicans who normally miss those elections who are voting in greater numbers this year.

The GOP even leads Democrats among voters 18 to 25, a group that has been the backbone of Democrats’ dominance over the past decade in Colorado.

“They wish they were in our position right now,” Michael Short, a spokesman for the Republican National Committee, said of Democrats.

Additionally, a poll released today by the Des Moines Register has Republican Jodi Ernst up 7 points on Democrat Bruce Braley; Ernst enjoys 51% support among likely voters and all the confidence that Braley’s camp has lost during the last half of the cycle:

The news will thrill Republican activists nationwide, who are counting on Iowa as an anchor for regaining the majority in the U.S. Senate. On Saturday, a progressive group organized a conference call with Majority Leader Harry Reid to urge Iowa Democrats “to double down and save the Senate.”

“If we win Iowa, we’re going to do just fine,” he said. “Iowa is critical, there’s no other way to say it.”

If Republicans control the Senate, Reid said, “think of what that would mean for our country.”

It’s hard to see much in these poll results that Braley could capitalize on to build a groundswell, [pollster J. Ann] Selzer said. “None of this looks good for him,” she said.

Braley has lost vote share since an early October Iowa Poll (he dropped from 46 percent to 44 percent) while Ernst has increased her share (from 47 percent to 51 percent now).

Another sign of trouble: Braley is losing by 3 points in his home congressional district in left-leaning northeast Iowa. In the early October poll, he was up by 1 point there.

Iowa Poll confirms what Iowa's most pragmatic Dems have known: Ernst is in command of race. Her 51-39 lead among independents is crushing.

The era of assuming votes in American elections is over. GOP efforts to broaden the base in states like Texas, Iowa, and Colorado give me hope for the future of the Party, and for the future of great candidates who are willing to work in districts and states that many conservatives left for dead in 2012.

Aggressive messaging on token issues isn’t enough. GOTV efforts and base-broadening have contributed to gains in both Colorado and Iowa, and if Gardner and Ernst pull it out on Tuesday, it will be what most contributed to their victory. Conservatives put a lot of pressure on the national advocacy groups to serve up ideal candidates for key offices, but that system doesn’t work unless local voters put on their walking shoes and help their candidates win.

If Republicans control the Senate, Reid said, “think of what that would mean for our country.”

Not over till the fat woman sings. Dems changed the voting laws in CO during the short time that they held both houses of the legislature and the governorship (until three Senate seats flipped over the gun grabbing legislation they passed). Apparently, not only can you register election, but there is some provision for bundling ballots. Supposedly, one person is limited to 10 ballots, but apparently there is no way to check this. I think there was also something hinky in Boulder too. The question is likely to be, again, whether the Republicans can beat the level of cheating by the Democrats.

Things have gotten looser in CO – last time I voted absentee, I had to include a copy of my driver’s license. This time, I didn’t.

For any state in which the Pubs retain (or regain) the state house and senate, job one is to restore voting rules so that they are once again honest and sensible. We want every vote to count; we don’t want any vote ‘suppressed’, and we are tired of voting fraud.

States then have to limit the power of public employee unions. End the automatic deduction of dues from state employee paychecks, eliminate ‘card-check’, ensure that state employees have benefit options outside union-mandated plans, and get the pensions under control.

Do both and the Democrats are going to become surprisingly sensible and centrist in your state — they’ll have to in order to win a state-wide election ever again. That would benefit the state and the Republic.

Agreed. And it is worse. I expect that the vote totals announced will have only a marginal relationship to the votes legally cast. Functionally, the people will have no role in selecting their government and the Democrats will have seized power illegally, unconstitutionally, and they assume permanently. Which has some implications for the future conduct of those who cast legal votes. We, of course, should still vote, because that gives us moral standing for what may come.

I would note something about the GOTV effort. In my county, it is being done almost exclusively by the TEA Party, not the Republicans. I will say that they have, grudgingly, refrained from attacking us for the last year; but you can tell that the strain is showing.

We had the state chairman of the Republican party come to one of our TEA Party meetings, and he claimed the Republican Party was behind the recalls of the gun grabbing Democrat state senators. Our county TEA Party was deeply involved, sending teams of volunteers to help our brothers and sisters in Pueblo including concealed carry permit holding bodyguards for the workers due to Democrat death threats.

The state party firmly opposed the whole effort from the beginning up until the ballots were counted. Then suddenly they said it was all their idea.

Their temporary forbearance from directly attacking us got us engaged in GOTV for the last year. I expect that we will win the honest vote in this county. There are at least 5 ways to game the mail in ballot/instant registration with no ID or proof of residence system that would not be detected.

After the election, things will probably return to the normal official “crush the TEA Party” Republican mode.

The Soros project destroyed CO as a conservative state. It can only be regained one vote at a time by people there who remember how much better things were for them before they let the ‘rats grab the state the way Californians did.

Ever since the Soros project, CO has been consumed by voter fraud.

I believe TX is their next target. That the people of Houston elected a pro-homosexual agenda-driven lesbian as mayor tells me they’re making inroads.

…people there who remember how much better things were for them before they let the ‘rats grab the state the way the ‘rats grabbed California.

It won’t mean a thing if Boehner, McConnell and Prebus remain.

THAT is the pisser. Ernst is beholden to McConnell. We’re never going to get rid of the Weeper.

TheFineReport.com said, “It won’t mean a thing if Boehner, McConnell and Prebus remain.”

It won’t mean a thing, even if none of them remain. Even if the GOP regains control of the Senate, they will still lack the votes needed to override an Obama veto, or remove him from office.

So, rather than Reid killing legislation – by preventing a Senate vote, it’ll be Obama killing it with a Veto – and ruling by Executive Order.

Obama is worse than useless to the Democrat Party now – he’s the primary reason for any midterm losses, especially the Senate. He has greatly damaged his own party on all fronts: domestic, economic, foreign policy, social issues, general competency, etc. Don’t think there aren’t Dems in purple and red states who are open to support impeachment should Obama get particularly egregious with bad, illegal executive orders. An impeachment based on sound complaints will haunt Dems in 2016 whether it is successful or not.

While it is encouraging that many of these people haven’t sold their souls to the left, it is discouraging they are so lacking in principle and conviction as to swing between opposite poles of the political spectrum almost on whim.

Our electorate is less literate and less informed than ever. And our education system is working hard to maintain that trend.