If Democrats Win Today, So Does Lena Dunham

If Democrats Win Today, So Does Lena Dunham 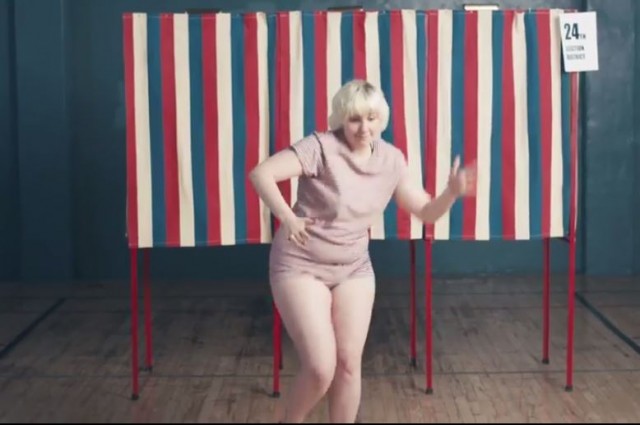 On this important election day let us not forget that Lena Dunham, who once described herself as the voice of her generation, wants everyone to Rock the Vote. And you can be sure it’s not for Republicans.

She didn’t vote in the last midterm election but what does that matter?

Celebrities are less likely to vote in midterm elections, just like us!

Rock The Vote released a public service announcement last month with a parody of Lil Jon’s “Turn Down For What” that featured public figures who explained why they planned to vote in the midterm elections, but according to public records, a number of them didn’t vote in the last midterm election.

Of course, Ms. Dunham has bigger things to worry about at the moment.

Thomas noted the passage where Dunham describes exploring her baby sister’s genitals at the age of seven:

“Do we all have uteruses?” I asked my mother when I was seven.

“Yes,” she told me. “We’re born with them, and with all our eggs, but they start out very small. And they aren’t ready to make babies until we’re older.” I look at my sister, now a slim, tough one-year-old, and at her tiny belly. I imagined her eggs inside her, like the sack of spider eggs in Charlotte’s Web, and her uterus, the size of a thimble.

One day, as I sat in our driveway in Long Island playing with blocks and buckets, my curiosity got the best of me. Grace was sitting up, babbling and smiling, and I leaned down between her legs and carefully spread open her vagina.

Williamson noted that Dunham described her own actions as similar in methodology to those of a sexual predator:

For the crime of quoting her, Ben Shapiro now reports that Lena Dunham has threatened to sue Truth Revolt:

Lena Dunham Threatens To Sue Truth Revolt For Quoting Her

On Saturday, HBO’s Lena Dunham sent a “cease and desist” letter to TruthRevolt demanding that we remove an article we posted last Wednesday on sections of her book, Not That Kind of Girl. The letter threatened legal action if we did not both remove that article, as well as print a note, the suggested language of which read as follows:

We recently published a story stating that Ms. Dunham engaged in sexual conduct with her sister. The story was false, and we deeply regret having printed it. We apologize to Ms. Dunham, her sister, and their parents, for this false story.

We refuse. We refuse to withdraw our story or apologize for running it, because quoting a woman’s book does not constitute a “false” story, even if she is a prominent actress and left-wing activist. Lena Dunham may not like our interpretation of her book, but unfortunately for her and her attorneys, she wrote that book – and the First Amendment covers a good deal of material she may not like.

The liberal media is couching every report on this subject by saying Dunham is fighting “right wing” accusations and claims that she abused her sister. The reports downplay Dunham’s actions, as if Dunham were the victim.

Funny. When did quoting someone become an accusation or claim?

Dunham’s little sister, towards whom Dunham took the, ahem, controversial conduct, is making noises on Twitter (screenshots via TPM): 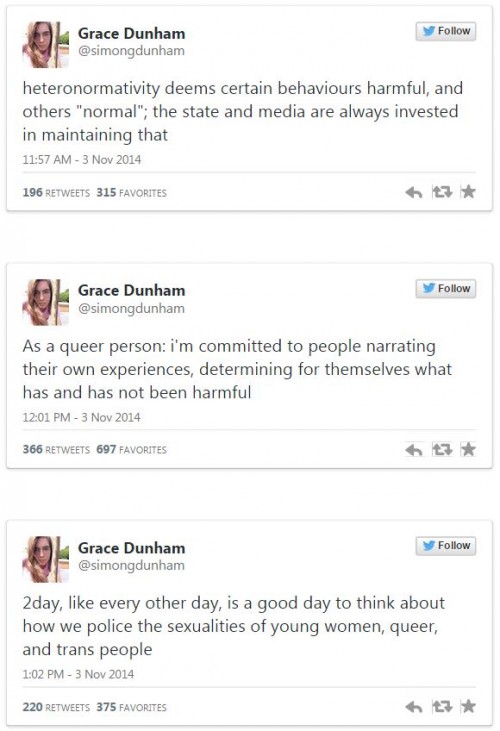 Don’t let Lena Dunham win today or ever for that matter.

Get to your local polling place today and rock your vote.

Your First Amendment rights may depend on it.

I am dismayed over the recent interpretation of events described in my book Not That Kind of Girl.

First and foremost, I want to be very clear that I do not condone any kind of abuse under any circumstances.

Childhood sexual abuse is a life-shattering event for so many, and I have been vocal about the rights of survivors. If the situations described in my book have been painful or triggering for people to read, I am sorry, as that was never my intention. I am also aware that the comic use of the term “sexual predator” was insensitive, and I’m sorry for that as well.

As for my sibling, Grace, she is my best friend, and anything I have written about her has been published with her approval.

Grace’s responses pretty much confirm that Lena did abuse her. She seems to think that if she as a 10 year old was okay with her 17 year old sister sexually abusing her, then its somehow a good thing.

Vet,
That’s pretty much the riff RS McCain is taking with his anti-(capital F)eminism articles. There is a running thread of sexual deviance, child abuse, and incest in the lives of the biggest names in Feminism.

As I understand the younger sister’s tweets, she’s homosexual, and thinks that’s good.

Well, I don’t think it’s evil, but it’s a shame for her, not to have a healthy life. I pray she doesn’t raise any children.

Daddy was apparently a sick phuc. The rotten fruit of a rotten tree, perhaps.

Before Lena’s book came out, which I would never read, I’d never heard of her. I don’t know who or what she is, other than your very typical, deviant lefty.

She’s in some idiotic HBO show that no one outside San Fran and the Upper West Side watches. Oh, and she can use the word “vagina” as all 4 primary parts of speech.

She’s just another Left-coast narcissist “victim” who purports to have wisdom and insight, when in fact, she has no more of the aforementioned that does a celery stalk and not one whit of common sense or decorum.

This is the woman that accuses some poor college kid of rape?

No, she accused some anonymous “college Republican” (her words) of rape, yet would not cooperate with the police to find him. Yeah. Not a bit suspicious.

So Grace Dunham is a Rape Apologist?

P.S. – PJMedia is collecting a list of sites for Lena to sue. OK to add this to the list?

I hope she didn’t actually molest her sister, but made it up to br shocking.

So your cattle ran away, your hens stopped laying, and your dog ran under the house, too…???

No by my monitor cracked and I don’t want to break another.

That is one disgusting looking skank. But astoundingly, her insides are even more nasty than her looks. That’s saying something. She is the poster-child for progressiveness… she is what being a prog is all about. Behold.

Is it possible that Lena’s actions as a child influenced Grace into becoming, to use her language, a “queer person”? Doesn’t what Lena Dunham forced on to Grace Dunham fall into the category of “sexual trauma”, especially considering how young Grace Dunham was at the time?

Is there someone here with some psychological expertise that could comment?

Remember to vote! Lena Dunham says voting is like molesting your sister for the first time.

The idea that Lena’s 1 year old little sister had the knowledge and dexterity needed to insert something into a body cavity that a person of that age should not even know exists, is just ridiculous! It’s my opinion that Lena Dunham was the sole actor in the whole scenario and should be ashamed of herself for this act, she should not be bragging about it and using it as a tool to sell books and further her career!

Or she made it all up to be shocking. After all, she probably made up the part of her book about the college Republican rape. Either way, she’s gross.