Hotels must say “NO” to anti-Israeli discrimination at academic conferences

Hotels must say “NO” to anti-Israeli discrimination at academic conferences

My column at The O.C. Register – “Unfairly singling out Israelis” 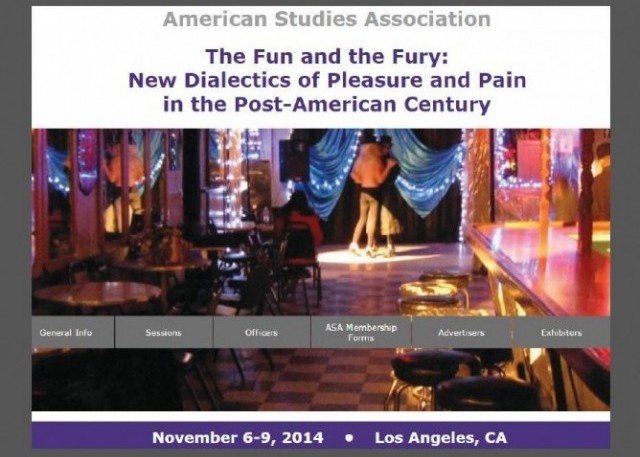 We have covered the academic boycott of Israel extensively, focusing on the American Studies Association.

Recently, in connection with the ASA annual meeting this week in Los Angeles, we reported on ASA’s discriminatory policy to bar attendance by representatives of Israeli Universities or any Israeli academic holding a representative title such as Dean or Rector.

After a letter alerting the hotel hosting the ASA annual meeting, The Westin Bonaventure, to the hotel’s legal obligations and potential liability, the ASA changed its position. The legal challenge was that hotels are bound by laws barring anti-discrimination in public accommodation, and therefore have a legal duty not to knowingly permit discrimination on the premises.

In reaction, ASA denied that it ever had the discriminatory policy which ASA in fact published multiple times and had on its website. ASA even announced that it welcomed Bibi Netanyahu to the conference.

In another development, as reported by Eugene Kontorovich at Volkokh Conspiracy at The Washington Post, The Times of Israel, and JNS, among others, the Rector [Dean] of the University of Haifa is taking up the challenge, and sending an official representative to the ASA conference.

As part of my occasional and continuing efforts to access new audiences, I have a column about the ASA conference at the O.C. Register, Unfairly singling out Israelis. In the column, I examine how the public and the hotel would have reacted if the discrimination were directed at any national origin group other than Israelis. 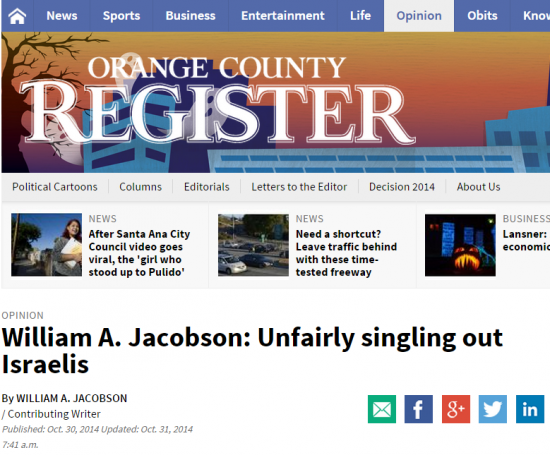 Imagine such a scenario – would any one hesitate to decry the singling out of Mexico and Mexicans?

Would anyone hesitate to say it was discrimination based on national origin (and depending how you define it, race)?

More important, would a major hotel hosting such a conference allow such discriminatory attendance rules to be carried out openly on its premises? ….

But you don’t need to imagine it. Such a conference is scheduled to happen in early November. In Los Angeles. At the Westin Bonaventure.

But it’s not Mexicans who would be discriminated against, it was Israelis….

Click over to read the whole thing. Please share it on Facebook and Twitter, to help get the word out: When it comes to anti-Israeli discrimination at academic conferences, the hotels must say No.

Professor, the anti-Israel discrimination/hypocrisy is odious enough, yet, I submit there is an even wider, stronger maliciousness in play here: “post-Americanism.”

The globalists’ — there are no nation states, just us smart ones fated and deserving to be hegemons — large target is not Israel, it is America, and even more so, it is the nation state of any name or kind at all.

Leverage on the anti-Israel/Jew enmity may be most effective from an expose of its globalist pretension.

Quite so. Even more – the real target is freedom.

Freedom of thought and individual rights are abhorrent to these people, who see themselves as Keepers of the Truth. They honestly and fervently believe that only those who think exactly as they do are fit to express opinions and to rule over the fate of others.

Notice the violent reaction to even members of their Collective who stray on any point of The Preferred and Settled Narrative, like Bill Maher.

The Fun and the Fury:

in the Post-partum ASA Boycott Calamity

LukeHandCool (who’d be willing to picket outside the Bonaventure if he had a hearty group of brave souls from solid conservative stock to join him. And who says congratulations to Professor J for his piece in one of California’s best newspapers. Only one I know of which carries Mark Steyn)

Sorry, but as much as I approve of protesting leftist nonsense, it isn’t worth traveling to what is left of California.

Now, if you assemble a group with torches and pitchforks to drive them back to the castle where their vile affront to God and humanity was created, call me maybe.

Tomorrow, vote for John Boehner for King of the World!