Hillary’s “Mook Mafia” preparing to crush all of us, “mafia style”

Hillary’s “Mook Mafia” preparing to crush all of us, “mafia style” 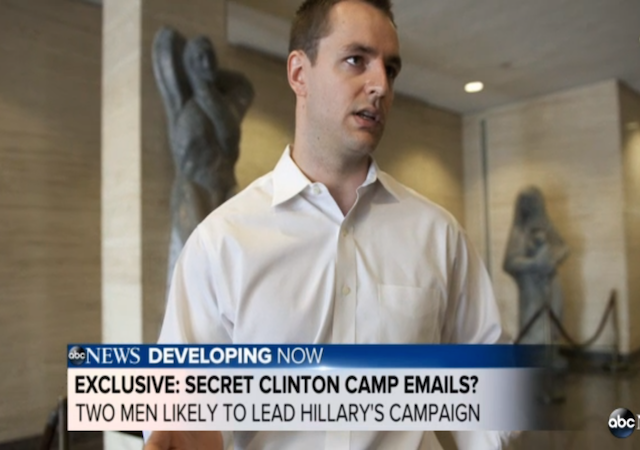 The reality of campaign politics is that there is no standard for rhetoric. You punch low, you punch high, and you start punching before you have specific people you’re tasked with punching.

Some progressives, however, are jockeying for early bids to lead Hillary Clinton’s 2016 Presidential campaign, and are using fellow Democrats’ low blows against Republicans—and each other—to improve their chances.

ABC News has received copies of e-mails from the “Mook Mafia,” a list serv run by 34 year old Democrat operative Robby Mook, who many believe could be slated to lead Hillary’s campaign team.

Copies of a cache of the emails obtained by ABC News, and revealed publicly for the first time, show Mook and Marshall demonstrating an aggressive tone in rallying their friends behind political causes, in exchanges that are often self-mocking and sometimes border on being profane.

They include rallying cries to, in Mook’s words, “smite Republicans mafia-style,” and, to quote Marshall, “punish those voters.” Mook sometimes calls himself “Deacon” in the emails, while Marshall, now a senior White House aide, refers to himself as “Reverend” in many of the exchanges.

The private emails were provided to ABC News by a Democrat on the listserv who has worked alongside Mook and Marshall on previous campaigns. The person who provided the emails is, like the vast majority of those on the listserv, supportive of Hillary Clinton, but does not support the idea of Mook or Marshall holding leadership roles in a second presidential bid. They were provided on the condition of anonymity.

That the emails are emerging publicly reflects the ferocious intra-battle to populate the top positions of an expected Clinton campaign.

“Aggressive tones?” “Borderline profanity?” These things are unheard of in the campaign world, obviously, as is the “clubby and pugnacious” atmosphere cited further down in the ABC News report. But what’s important about this big e-mail reveal isn’t the content—because everyone talks smack during elections, and if you claim you don’t, you’re a liar—but the fact that a fellow operative was so desperate to keep Mook away from Team Hillary that they sold out a large group of fellow operatives in order to do so.

Progressives at large are not impressed by the sell out…

I'm not on that Mook Mafia list, but I hope whoever leaked it is revealed and never, ever, ever works in Democratic politics again.

…especially considering the mindset governing this particular group of operatives:

“First, the mafia never separates, it just continues to grow and expand and move into other states in order to destroy Republicans,” he wrote. “A special thanks to none other than the namesake himself, Deacon Robby Mook. Without him, there would be no mafia and I for sure know I would not have learned as much as I have in this business and have this opportunity.”

The best thing to do right now is sit back and let them eat their own. Whoever takes the wheel of Clinton campaign is obviously going to have an uphill battle convincing their fellow operatives that they’re the best person for the job; and if there’s already dissension in the ranks, that’s guaranteed to trickle down to the grassroots level and into the volunteer base. This is a struggle I think both parties will have going into 2016, but the fact that the far left just fractured itself in a very public and embarrassing way isn’t something the media or the base is likely to forget if Clinton does decide to throw her hat in the ring.

Sounds like a group of pimple-poxed teenage boys in black trench coats covering their jammies, telling each other about there powerful swinging cods.

Get a date, dudes. Then get a real job.

Since when do “innies” swing? Cod or not?

They are fighting over deck chairs on the
S.S. Titantic Hillary.

hmmm…..wonder who ABC has in mind for a candidate? Lizzie?

By all means, never jump in to separate those fighting if no other life or limb is at risk, let them work it out.

So amusing these Democrats seem to actually believe Hillary is the favorite to take it all. She will either have to repudiate Obama almost entirely, even though she was with him a full term, and alienate his core supporters, or endorse his policies which by then will be so toxic as to kill a campaign.

The media does this routinely to winnow out GOP candidates to one of their liking. You know, the final one who they can skewer en masse. They only do this to Dems in the primaries. After the selection they are all on board with the final candidate. If Hillary wins the nomination, ABC will not even acknowledge this article or others like it. It never happened.