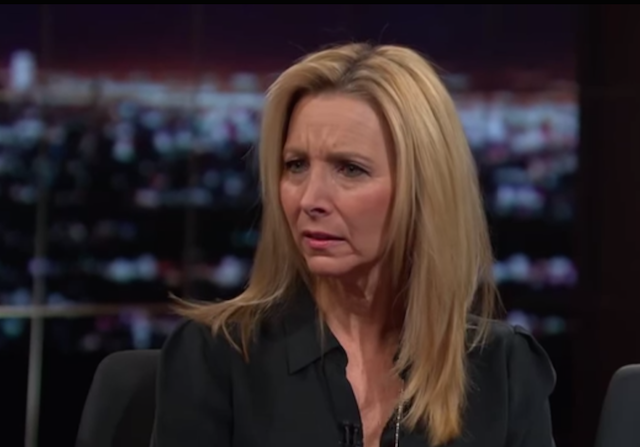 Bill Maher and his merry panelists experienced the mother of all pregnant pauses when a viewer’s question directed at actress Lisa Kudrow baiting an anti-Republican reaction to the “war on women” fell flatter than a pancake on a cold skillet.

“There’s a Republican ‘war on women?’ Which part of being a woman?” Translation: why am I here right now?

The recent reboot of Kudrow’s hit TV show “The Comeback” has forced pundits to once again begin beating the dead “war on women” horse, but from Kudrow’s perspective, jumping immediately to cries of “institutional sexism!” just doesn’t make sense:

Kudrow told HuffPost Live’s Ricky Camilleri on Tuesday that while she did feel audiences were uncomfortable with a humiliated woman on TV, she thinks the problem expands far beyond Hollywood.

“I’m not sure I’d go as far as misogyny in the business, though, but a lot of people do see it that way. … I think it’s just the world. I don’t think it’s specific to this industry,” Kudrow said.

The actress recalled a conversation with her “Comeback” co-creator Michael Patrick King during the first season in which he expressed unhappiness that entertainment lacks a point of reference for every type of woman, especially a potentially unlikeable one. It wasn’t until the series got the axe from HBO that Kudrow realized King had a point.

Whether you agree with Kudrow’s perspective on the differing portrayals of men and women coming out of the entertainment industry, I think her reaction to Maher’s question, coupled with this snippet, is representative of more women in America than the cheap punditry of outrage peddlers like Sandra Fluke.

The portrayal of Kudrow’s “Comeback” character bothered some, but Kudrow herself didn’t seem to think about the gender bias-consequences of that portrayal until pressed about it—and I think that’s how most women react to things like this.

Most women I know don’t expect a “point of reference” in every female character they’re exposed to, mostly because in the real world, having some sort of expectation of womanly connection to every X chromosome in existence is to be divorced from reality. However, most women I know would also find it unreasonable if every female character was turned into some sort of misogynistic caricature of the modern woman, making it impossible to identify with or make a connection with the story the actress is attempting to tell.

Welcome to the middle ground between Victorian England, and a “war on women.” Society should relax and stay a while—because this is where the answers to addressing legitimate sexism will be found.

I get more out of watching the deliberate and fastidious care with which my cat buries his sh!t in the cat box than watching Bill Maher and his panel of air-heads and pot-heads.

If Bill Maher wants me to watch him, I’d suggest that he try tightrope walking the Grand Canyon while carrying a grand piano. Blindfolded. On roller skates.

What do you have against pianos?

Methinks they thought the caller was asking about
“Warren’s Women” and were afraid to open their mouth!

Once again I got trapped in to listening to that snarky foul mouthed POS.

don’t you love how Leftists like Maher like to revise history? It wasn’t the GOP who couldn’t stop talking about lady parts but the Left leading that in every conversation.

what an indecent person

I haven’t seen a Bill Maher bit since before he called the 9/11 terrorists braver than American AF pilots, except for once when visiting my sister about six years ago when she put his show on.

I haven’t visited my sister since.

I too got about 20 seconds in and wondered WTF am I listening to Maher for? Too late I remembered that nothing… nothing …is worth having to endure Maher and friends to see it.

Damn you, Amy Miller. Damn you to hell.

Amy says the dinner date is off.

Amy, Henry forgets his manners whilst in the depths of his passion. (But the clip could have been shorter.)

Does Bill ever mention the Mohammedans war on women’s private parts, vis-a-vis FGM? How about the Muslim father in Britain who called the FGM hotline, not realizing it was for reporting this abuse, but thinking it was for finding a doctor to do the mutilation. Did the authorities take his daughters away from him?

I want my 4 minutes back.

You can have the 4 minutes I didn’t waste watching it.

You need help if it took you four minutes to recognize an extreme threat to your sanity.

That Lisa Kudrow didn’t know about the so-called “Republican war on women” is pretty amazing, actually.

She didn’t get the memo – literally.

She also must have missed the 24/7 coverage of that meme since the January primary when Stephanopoulos introduced it by asking that inane, idiotic question about banning/making illegal birth control.

She, maybe, is the only female in Hollywood who DIDN’T CARE about or listen to the leftist politics swirling around her……..but, of course, we all know who she voted for.

She is the penultimate, the FACE of the “low-information voter.”

What little I know about this lady includes her public decision to eschew per-marital sex, which is a VERY rare thing in her generation and industry.

If she was not marinated in the politics of Hollywood and the “war on winnims”, I think that could be a virtue, and certainly no vice.

And, no, I have no idea…and won’t ASSume…who she voted for…or even IF she voted.

“She is the penultimate, the FACE of the “low-information voter.”

Doesn’t make sense.
pe·nul·ti·mate
adjective
last but one in a series of things; second to the last.

You assume her astonishment at the idea that there’s a “Republican war on women” was genuine. I don’t.

I don’t watch videos featuring any leftists that last more than a minute and a half, and only then if it is embarrassing to the leftists or they cry.

I don’t watch videos of conservatives explaining things that should be self-evident to any sentient 15 year old with a decent education, either.

Life is too short.

How RINO does one get that Bill Whittle gets under your skin? Good God, Ted Cruz must give you seizures. OMG! Conservatives want to do stuff! Important stuff! Can’t have that! Too risky… wouldn’t be prudent… stay the course…

Kudos for Kudrow, but here’s not enough time in life to waste on this drivel.

This bozo has any ratings at all because we conservatives make him famous by commenting on his idiocy. It wastes time and diverts our focus, which should be on taking power in the GOP — or starving it out of existence, and replacing it with the Tea Party.